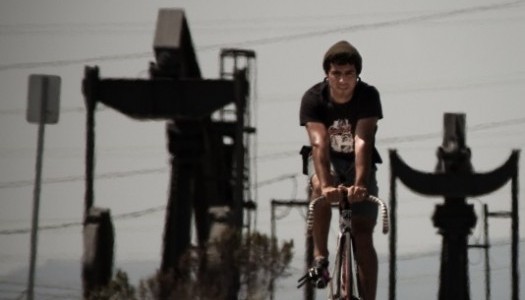 A few weeks ago I watched To Live and Ride in LA at Filmbar, a brand new film about aggressive urban cycling in LA. I walked away from the movie entertained but feeling under-represented.

It was all about young men, mostly in their early 20s, who ride fixed gear bikes in traffic in LA and in urban races often without breaks. It was thrilling to watch and the accompanying music was great, but what does that reckless kind of biking have to do with me?

Plus all the riders profiled in the movie were men, not a single woman was shown as a rider. The few women that were in the movie were in the audience or girlfriends of the riders. Perhaps women don’t feel the need to prove themselves this way, but I’m sure there are some women who participate in the fixed-gear bike counter-culture in LA and why weren’t they included?

I told Joseph Perez, the City of Phoenix Bicycle Coordinator about my frustrations with To Live an Ride in LA so he sent me a list of 9 bike movies that I’d like better. And I thought I’d share them with you too.

2. 2011 Bike to Work
3. Maricopa County Pump Track
4. Scottsdale Cycle the Arts
5. MAG video
part 1 part 2
part 3
6. Clean Air Champion
7. With my own two wheels:
8. Bicycle Film Festival
9. Filmed by Bike
“we offer Re-Screening rights if you’d like to use Filmed by Bike as a group screening or fundraiser”
Bonus:
Here are two recommendation from Jeff Fischer, “an absolute must” for bicycling movies:
10. Breaking Away
11. American Flyers
Photo Credit: An image from To Live and Ride in LA. Photo from Hiff 31.