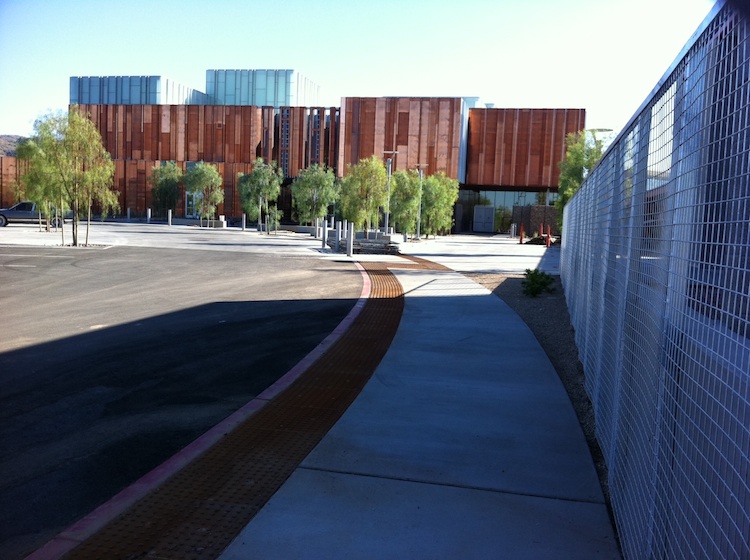 Today’s post is by Jennifer Gunther, a young woman who was introduced to me by Modern Phoenix‘s Alison King. It turns out that Jennifer is contemplating becoming an architectural writer! Well, how wonderful is that? We need more women in the field and in general more critical thinkers and writers in the world, especially around the topic of the built environment, so kudos to Jennifer.  Jennifer and I attended the South Mountain mayoral forum on Tuesday held at South Mountain Community college and below is her recap of it.

Jennifer Gunther is a Tempe native and a sophomore journalism student at the Cronkite School in Downtown Phoenix. She has written news articles and opinions for NAU’s The Lumberjack, where she started college and was also associate copy chief. She is currently an intern at Modern Phoenix and will be an opinion columnist at ASU’s The State Press in the fall. When she is not writing, Jennifer spends her days exploring Tempe and Phoenix, always keeping an eye out for interesting or historic architecture. She loves learning new things, meeting new people and listening to music.

South Mountain Community College’s rust-colored, corrugated steel-clad Performing Arts building, designed by Eddie Jones, was host to “South Mountain Counts,” one of several mayoral candidate debates for the 2011 race. The undulating, wood-paneled walls of the auditorium flanked each side of the black stage where the seven candidates were asked questions by moderator Win Holden. Dr. Lauren Shellenbarger, Vice President of Student Affairs at South Mountain Community College, set a tone of community dialogue for the night. Holden furthered her sentiment as he laid the ground rules for the night’s discussion of key issues for Phoenix ─ and particularly South Mountain Village voters. Both candidates and audience members were courteous and did not speak out of turn.

The focus of the evening, which began with an opportunity for audience members to voice their questions for the candidates, was on public transportation and the image of South Phoenix. The candidates then introduced themselves and expressed their values and goals for the mayoral office.

Holden, who charmingly yielded a large, inflatable gavel to symbolize the structure of the respectful debate, posed prepared questions to the candidates. Anna Brennan cited her political inexperience, but said she will never make unreal promises. Throughout the evening, she made it clear she will keep government open and transparent. Thane Eichenauer said he intends to limit taxes and city spending if elected; his responses to questions were abruptly pertinent to his position. Wes Gullet emphasized his plan for job creation and city renewal, Claude Mattox said Phoenix needs “fresh energy and a new set of eyes to keep a laser focus” on job creation, Peggy Neely cited her past experience as a councilmember to support her mission of bringing jobs to Phoenix and Greg Stanton advocated economic development and supporting public education. Jennifer Wright voiced her support for small business and a “safe and secure” community environment, words she frequently used in her responses.

Responses to supporting a Light Rail extension to Baseline Road were diverse; in fact, some candidates said they would prefer to make changes to the bus system instead. Mattox said a mass transit system that “actually” supports the (South Phoenix) community, such as rapid transit for people to go to work and buses that go to school for students, is an immediate solution for the South Central corridor’s transportation issues. Neely said she wants to change the “layered” approach to overseeing transportation in Phoenix. “We can plan transportation for this whole region,” she said, referring to the many bus transfers it takes to travel to different cities. Brennan said she would like to see the private sector oversee expansion and installation of the Light Rail, and Eichenauer succinctly said he does not support any expansion of the Light Rail. Wright said South Phoenix will never have the population density to support expansion and that buses better develop with the needs of the community. She also said the light rail has closed businesses and referenced figures to support her claim that the gray and teal rail has not been cost effective. Gullet ambiguously stated the 2025 master plan currently does not include Baseline, but said he wants a “return on the investment” the city made on the Light Rail before planning to expand it. Stanton said he has always promoted the Light Rail expanding to south of Central Avenue and believes it will be heavily used, much to the benefit of local business.

Candidates clearly expressed their stances on South Phoenix’s high volume of foreclosed houses. Gullet, Stanton and Brennan said they would hold banks to a higher standard for keeping foreclosed homes safe and maintained, while Neely and Wright said they would bring in better job markets so people would be able to afford their homes. “Without jobs, you can’t pay the mortgage,” Neely said. Wright said the Steve Jobs of the world come from entrepreneurism, which comes from small, neighborhood business. She would make sure neighborhoods are safe by increasing police patrols in vacant homes and would make sure they were not allowed to fall into disrepair. Mattox called foreclosed homes a blight and said he would work on the pre-foreclosure process to keep people in their homes, adding he would keep properties up and running. Eichenauer simply explained that Phoenix cannot make foreclosures go away and that we cannot “demonize” banks for them. According to Eichenauer, it is “a fact of life” that people made the mistake of buying a home when they could not afford it.

When asked about increasing the amount of jobs in Phoenix, especially in the South Mountain area, Neely said she would reconnect with existing employers and grow Arizona’s already existing sectors, including Bio Science. Referencing community member’s concern over South Phoenix’s image, Neely said “We can sell the amenities of this area and match them up to businesses.” Stanton reminded the audience that he was against building a football stadium in favor of the TGen project because he believes in a “more sustainable, more diverse economy.” Wright supported small business, saying “Phoenix can’t get in the way … it’s hard for businesses to get up off the ground in Phoenix.” She recalled a friend of hers who was not able to open a restaurant in town. Brennan, like Wright, touted fewer barriers for small business. “The government and city hall must be open to and a resource for” small business, she said. Brennan said she is familiar with small business because she opened her own restaurant. Eichenaeur responded that limited government will help businesses prosper in Phoenix, whereas Gullet said he would create a procurement plan that would reward local shops for doing business in Phoenix. He, too, would like to see government be less involved. Mattox, a current councilmember, countered Gullet by saying there is already a procurement code and that job retention is important. “Successful people already here have ideas, so let’s use them,” he said, adding that South Mountain needs transparency for people to get work done.

As for the proposed South Mountain freeway, Brennan and Wright voiced no clear opinion, telling the audience that they would listen to the people. Brennan hinted that she thinks walkability should be the vision for South Phoenix and admitted being unfamiliar with the issue. Eichenauer said he also had no strong opinion. Neely said the past three votes on the subject reflect the people’s support of the freeway, but said now is the time to address how to build. She said she is okay with moving the freeway further south as a parkway. Mattox also said he is okay with the parkway idea, but said he would like to see a decision made “sooner as opposed to later.” Gullet emphasized a sense of urgency for the freeway, while Stanton said he does not support the South Mountain freeway because it would cut through the preserve, which he said is illegal. He said he favors “right, long-term decisions” for the freeway.

The evening’s overall conversational tone took on a more serious note when Holden asked candidates how they voted or would have voted on the food tax. All but Mattox were opposed to the food tax. Mattox said the tax allowed Phoenix to retain services such as the fire department. Stanton did not answer the question directly, saying that the adoption of the food tax should have been more transparent and should have been put to a public vote.

The final question of the evening was the candidates’ positions on improving South Phoenix’s appearance through beautification. Gullet said vibrant communities are made by vibrant economies, and Mattox proposed a retrofit program based on bonds and matching funds. Neely mentioned improving medians, adopting a landscaping standard and attracting new business that would build new buildings. Stanton proposed uniform standards for neighborhoods and implementing the “beyond the banks” program for the Rio Salado. Wright encouraged business-friendly development for empty lots and buildings, as well as developing partnerships with business for safe streets. Brennan, who also supports small business, said she is against more codes and would like to reward beautiful homes and businesses. Eichenauer said that the government should have nothing to do with beautification efforts.

All candidates gave a brief summary of their platforms to conclude the debate, several commenting on how successful the dialogue was and encouraging audience members to vote or register to vote.