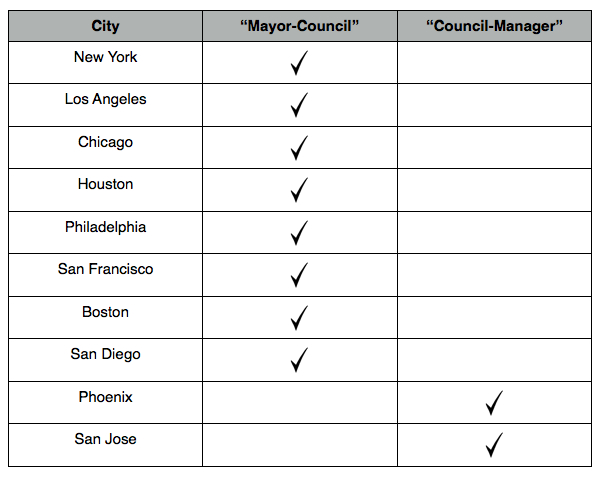 Is it time for Phoenix to Change its City Government?

Today’s post is by Blooming Rock contributing writer Will Novak:

With the Phoenix Mayoral elections coming up in the fall and debates happening around town between the candidates, one begins to ponder about Phoenix City Government. The vast majority of Phoenicians don’t bother to vote for Mayor, perhaps in part due to the fact that currently the Mayor of Phoenix is little more than a glorified Council Member. Now is the time to consider switching our City Government to a system that will allow for a bold Mayor with great vision to lead Phoenix.

Phoenix’s current system of City Government is the Weak Mayor/“Council- Manager” form. This form of government is most common in small towns, mid size cities, and counties. In this system the Council acts as the Legislative body and the Mayor’s vote is no more powerful than any other Councilman’s vote. The primary executive officer is the City Manager, a non-elected position appointed by the Council. In this way the “Council-Manager” form of government is similar to a corporation that is controlled by a Board of Directors that then appoints a CEO.  A “Council- Manager” system limits the power of the Executive and spreads power around more evenly, theoretically reducing the possibility for corruption. However this also means that a strong vision is rarely achieved and a City takes on a much more conservative and cautious planning and governing style.

The other prominent type of City Government is the “Mayor-Council” system, often used in larger cities. Most of the large Cities that use the “Mayor-Council” system use the “Strong Mayor” variant, with the Mayor as the head of the Executive branch. This system is similar to our State and Federal Government systems with the City Council acting as a unicameral legislative body and a check on the powers of the Mayor. The “Mayor-Council” system runs the risk of a terrible Mayor being elected who is able to either be bought off (think “Tammany Hall” ), or who just runs the City poorly. Conversely, its a much more aggressive governance style that allows the City to make bold decisions, deal with problems directly and have a strong vision. All five of the U.S. Cities that outrank Phoenix in population use this system.

Another element to look at when discussing a City Government’s make-up is the size of the Council itself. In Phoenix, our City Council is rather small at just 8 members. Each Phoenix Councilmen has over 180,000 residents in their district, thus they preside over a district with the population near to that of Salt Lake City! Additionally, Phoenix’s current Council has no “at large” members who represent the interests of the entire City.

The third thing to look at is the way the Council Districts themselves are laid out. Over the years Phoenix’s eight districts have been gerrymandered beyond any form of sensibility. Our most rural area (Laveen) and most urban (Downtown) area are in the same district (District 7). Ahwatukee and the Biltmore area are randomly in the same district, even though they’re geographically far afield. Then, of course, there are the City “Villages” (“North Gateway”, “Camelback East”, etc) that don’t seem to correlate with actual neighborhoods nor Council districts. Many neighborhoods and “Villages” are represented by multiple Council-people, making working with City Government a needlessly confusing process.

Parts of Laveen and Downtown are lumped together in District 7

Seemingly for as long as anyone can remember, Phoenix’s municipal government has been slow to act on big issues, not terribly progressive, and has apparently lived by the motto “cover your ass.” In my estimation, it’s time for our City government to follow Daniel Burnham’s advice and “make no little plans.” We need to  begin making Phoenix into a more urban, green, walkable and sustainable place. It seems impossible to turn Phoenix into the City we all want it to be when we have a system of governance that promotes being 25 years behind cutting edge cities around the country.

While I, nor anyone, has the “magic bullet” plan that will remake our City government into the perfect system, I do have a few ideas that you can probably guess at from what you’ve read above:

*Expand the size of the City Council and add “at large” members who look out for the good of the whole city and are above District v District bickering.

*Redraw both the Council Districts and the Urban Planning Villages so they coordinate with one another and so neighborhoods have one Council-person to look to.

The exact size of an expanded City Council should be discussed thoroughly, though my initial thought would be to expand to 12 Councilmen elected from districts with 3 at large members (15 total councilmen). This would reduce the number of people in each district by almost a quarter, making the districts more manageable as Phoenix continues to grow. Additionally, it would reduce the broad geographic scope of the districts and help make them actually relate to existing areas of the City.

Those in favor of continuing with a “Council- Manager” form of government will protest, saying switching to a Strong Mayor system is too risky. They may even say, “what if a corrupt candidate in the pockets of sprawl developers is elected? Wouldn’t that hurt urbanism and Downtown Phoenix?”  While that is certainly possible, I believe it’s time for Phoenix to take risks and try new things to move forward as a City. Besides, it does seem that one way or another, the citizens of Phoenix generally do end up electing Mayors who are pro-Downtown but are then often constrained by our governance system to really make it great.

Great Cities have great leaders and Phoenix’s system stymies any potential for that. No matter how much any Mayoral candidate talks about improving shade, walkability, or whatever your key issue is, our current system will limit how much positive change they can actually bring about. Most of the large, progressive, great cities in this country use a Strong Mayor/”Mayor Council” system like I’ve outlined.  For the most part, the only other large cities that use a system like Phoenix’s are other sunbelt boom towns that have yet to convert to a “Mayor- Council” system (i.e. San Antonio, Dallas, San Jose).

Giving the Mayor more power, as well as expanding and redistricting the City Council, won’t come without expense or potential risk. But its time for Phoenix to stop playing it safe and start aggressively making up for lost time. Phoenix has such a unique opportunity as America’s major desert metropolis to be a City unlike any other on this continent, but we’re so far away from achieving our potential. Its time to switch to a system of governance that allows our Mayor to throw a “Hail Mary” and push Phoenix into the 21st Century.