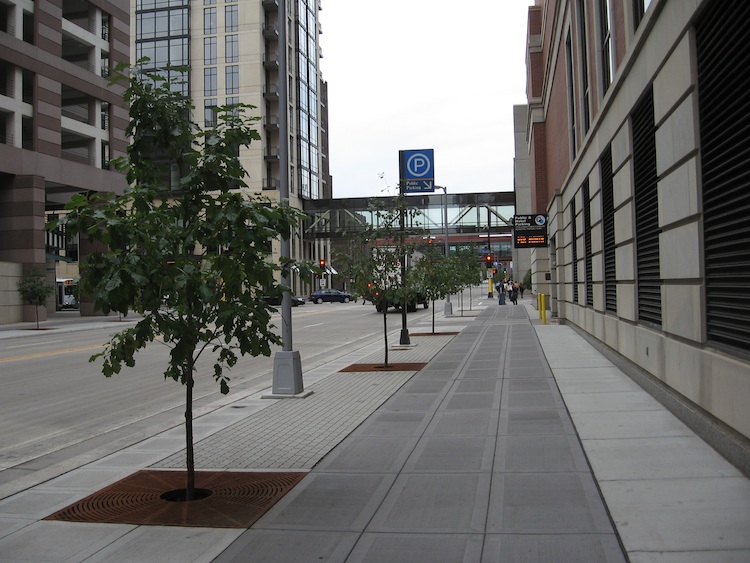 Peter MacDonagh on the Importance of Green Infrastructure and Old Trees

The Marq2 was a 48-block long redevelopment project in downtown Minneapolis.  This project utilizes the Silva Cell, to contain large amounts of bioretention underneath the paving.  Photo courtesy of The Kestrel Design Group.

I learned all this from the brilliant landscape architect Peter MacDonagh, partner and director of design and science at Kestrel Design Group based in Minneapolis and a national authority on green infrastructure.

Peter will be speaking at the Desert Horticulture Conference in Tucson on May 20.  You can register for this conference here.

Listen to my fascinating interview with Peter below.

Part I: Peter tells us what green infrastructure really means and why it’s so important:

Photos in the video from the Nokomis Stormwater Wetlands project by The Kestrel Design Group.  Photos courtesy of the same.

Part II:  I love to talk about the urban forest and well, so does Peter.  The Urban Forest is the most ubiquitous form of green infrastructure and Peter tells us why trees are so vital:

Part III:  If trees need so much soil space to really survive for a long long time, how will we ever get old trees in crowded cities?

Photos in the video of the Marq2 redevelopment project in Minneapolis pictured above which uses the suspended pavement technology. Photos taken from various websites.