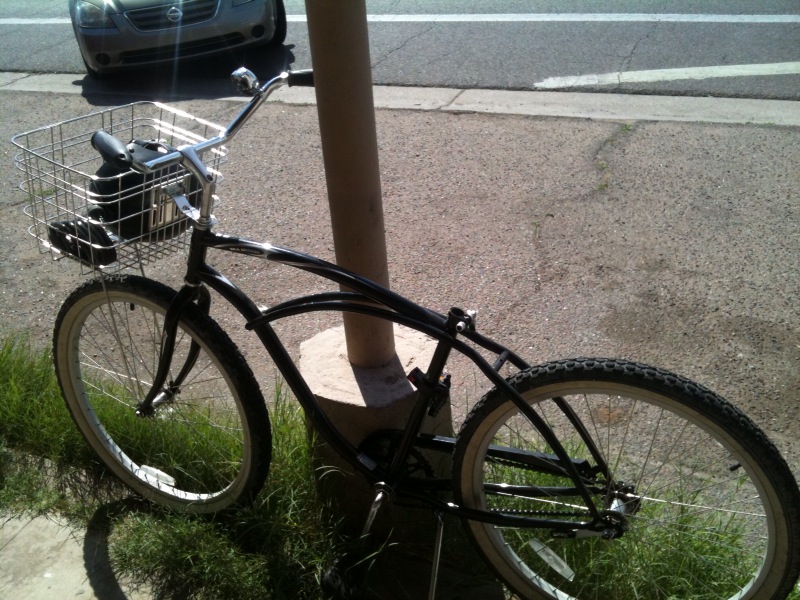 Car-Free Stories: A Seatless Bicycle and the Stigma of Cycling for Women

On Wednesdays, I usually post an update on the Castaway House. But our team is still in the middle of choosing a contractor to work with, so I’ll give you an update next time.  Today, I’d like to share a car-free story with you.

Yesterday at around 2:00pm, I said goodbye to my friends Kathleen and Doreen and walked over to my bike that was tied to the sign post at La Condesa. I put my computer and gunny sack into my big silver basket and proceeded to unlock my bike, like I usually do.

But then it struck me, my seat was gone!!! Then slowly, with a heavy disappointed sigh, I realized someone had stolen my bike seat while I merrily laughed and chomped on a Mahi Mahi quesadilla inside La Condesa.

Being the consummate documentor that I am, I immediately took this photo and posted it on Facebook, to share my pain.

My bike as I found it at La Condesa yesterday

But this story is not about my stolen bike seat.  It’s about what it’s like to be an urban cyclist and the daughter of someone who thinks that commuter cycling is a sign of fiscal failure.

Amongst the many condolences from my Facebook friends about what happened, my well-meaning but stubborn father once again expressed his long-standing frustration that I ride a bike at all.  According to his world view, riding a bike to get around is beneath me.

It’s something only poor people do.  Having grown up in Dar Es Salaam, Tanzania and spending most of his life in places like Karachi, Pakistan and Maputo, Mozambique, it’s no wonder he thinks this way.  In those third world cities, especially a couple of decades ago, it was true that only the well-off had cars and the rest of the population rode bikes or took their chances on crowded buses.

This notion that biking and public transit are only for the poor has stuck with my dad, even though in this country, for the most part, most people (including me and Paul) can afford a car or two. Wanting the best for me, my loving dad continuously and publicly reminds me that I should buy another car and stick my bike in the shed, forever.

Just as often I respond to him that the reason I prefer to ride a bike instead of drive is not because Paul and I can’t afford a second car, but because I really enjoy being a bicycle commuter, it’s better for the environment, and it’s great exercise.

(The financial benefits of not owning a second car are pretty nifty too.)

But, it’s not only the economic stigma of biking and transit vs. owning and driving a car that makes my father bristle at the fact that I choose to ride a bike. The other reason is cultural. In the culture my dad grew up in, it is unseemly for women to ride bikes.

So I got a kick out of Kevin Kellogg’s post yesterday when he mentioned what Susan B. Anthony said about bicycling:

I think it has done more to emancipate women than anything else in the world. I stand and rejoice every time I see a woman ride by on a wheel.

When I read this, I imagined what it would be like if women in Saudi Arabia were allowed to bike.  Heck, they’re not even allowed to drive much less bike. So they’re stuck at home, relying on men to drive them around. When put in that context, you can see that Ms. Anthony was dead right, the option to cycle means mobility, and therefore freedom for women.

But in this country, where women are superbly free and powerful compared to our unfortunate sisters in Saudi, we don’t need bicycles to emancipate us anymore.

However, the fact remains, everywhere in the world, particularly here in the States, bicycling instead of driving is a big step towards financial freedom, which in today’s troubled economic times, means a great deal to both men and women.

As for my bike seat, I got a new one and am learning to keep a better eye on it as I cycle my way through life in Phoenix… 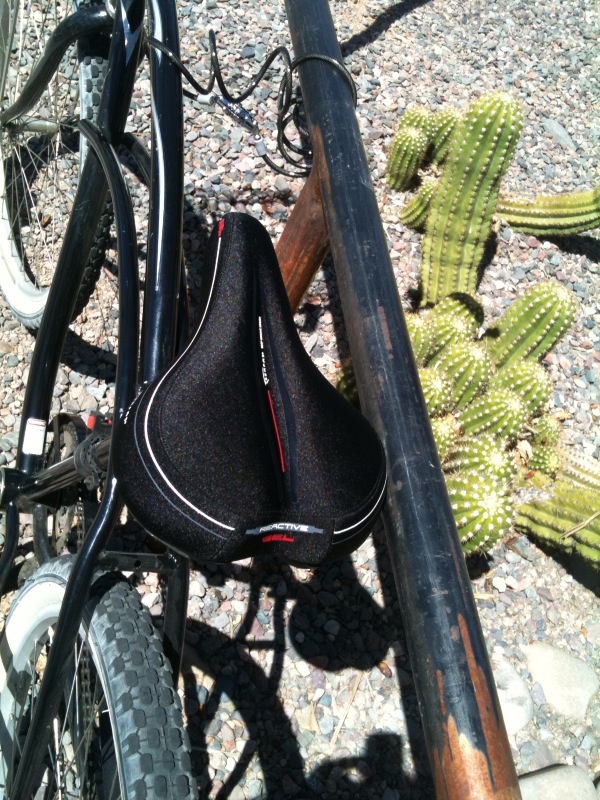