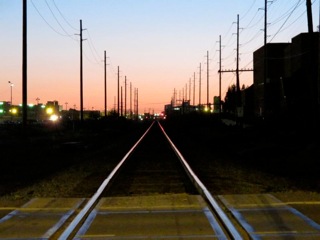 Hedonistic Travel: The Pleasures of Carlessness 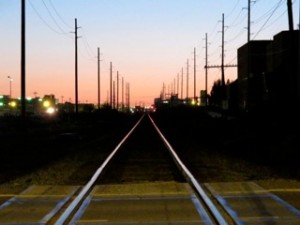 Today’s post is by Sarah Davies, who’s visiting Phoenix for about a year or so from the UK as a researcher at ASU.  I first met Sarah at Critical Mass and we exchanged a few friendly words while trying to ride two abreast and to avoid the nearby speeding vehicles and falling in the gutter.  During our short and understandably distracted conversation, I found out Sarah doesn’t have a car, she lives in Downtown and works at the ASU Main Campus.  Intrigued, we followed up our brief riding encounter with a coffee at Lux a few weeks later.  It turns out Sarah has been thinking a lot about the nature of being carless in our unique city and is quite brilliant to boot!  It’s a pleasure to have her thoughts and perspective as visitor to Phoenix and a guest on Blooming Rock.

Sarah Davies is a researcher at Arizona State University’s Center for Nanotechnology in Society. She has a BSc, MSc, and PhD from Imperial College London and specializes in the sociology of science and society: currently, she’s particularly interested in how new technologies shape cities and in ways to engage the public in civic decision making. She lives in downtown Phoenix and spends a lot of time in coffee shops.

When I was growing up, my parents would, two or three times a year, pack my sisters and I into the car and drive us all up to my grandparents at the other end of the country. Now, this was the UK, so the other end of the country was a six hour – rather than six day – drive; being the UK, however, this counts as an extremely long journey. It felt even longer to me: my memory is of being squashed in the back seat, quarreling with my sisters, watching formless and extremely boring grass verges go past, and battling acute nausea. Periodically we would stop so that I could be sick.

I never really got over my car sickness; even today, unless I’m actually driving (which for some reason brings immunity), I do a lot of staring fixedly out of the window and turning the air con up. Perhaps this explains why I’ve never really liked cars. Those early memories are just too strong: show me a car and I’ll show you a metal box which makes you ill (and where your siblings inevitably end up getting their choice of music on the stereo). Fortunately for me, then, I’ve so far managed to avoid needing to drive on a regular basis. I’ve always lived in places – such as central London – where owning a car is not only unnecessary but, given the cost and the traffic, actively self-defeating.

Moving to Phoenix has taxed my ingenuity a little further. I’m holding firm, however, and – other than occasional rentals – am car-less (but not careless). I use the light rail to get to work, bike around downtown, and walk where I can (those parts of the city where they provide sidewalks). I also resort to the buses on those occasions I want to move in a straight line and have plenty of time to spare. What I want to write about here, though, is not the sacrifices but the pleasures of this kind of lifestyle. In a city where telling people you are car-less often results in similar responses to telling them that you only eat orange food* – how on earth, they say, do you survive? – I want to argue that living car-free is hedonistic rather than tediously abstemious.

If we’re talking about hedonism the most obvious place to start is with alcohol. I’m not a big drinker, but I’m also someone who doesn’t like to drive with even a smidgeon of alcohol in their system (there was a UK public health campaign a while back with the tagline: Have none for the road. That’s pretty much my motto). Using public transport means that you can happily go for a drink or three without worrying about how you’ll get home (or who you can persuade to take the designated driver role).

I think the less obvious pleasures are more interesting. Taz has written before about the light rail as Phoenix’s premier public space, and I think this is right: it brings together people from across the demographic board. If you enjoy people-watching it’s the place to go; if you’re lucky, you’ll also get some impromptu street theatre as riders flirt, complain or – as was the case on one train last week – solicit votes for a new political party. Using public transport means that you come into contact with people who are not your friends, family or colleagues: it heightens your awareness of the city that surrounds you. As a stranger in a strange land, I love this.

I also love that travelling time is not dead time. Living in London you’re constantly aware of what the latest ‘must read’ book is by what people are reading on the tube, and the few times I’ve lived in places where I could walk to work I noticed my fiction consumption drop dramatically. Depending on what the day holds, I read novels, work, listen to music or just stare out of the window during my morning light rail journey. Rather than spend 20 minutes focusing on driving I can spend 30 reading my favourite authors: I’m pretty happy with that trade-off.

Even the slowness can, I’d argue, be pleasurable. While there are few things more frustrating than seeing a bus sail past and knowing that there won’t be another one for half an hour, I greatly value being forced to slow down by my dependence on public transport. There’s perhaps 40 minutes to an hour between my office and my apartment the way I travel: this time insulates my evening, allowing me to process the day or reflect on the next. Just as there are movements building around slow food and slow reading, there are benefits to slow travel. The light rail cuts through the heart of Phoenix. I’m familiar with the texture of the city – the frills on the Luhrs Building, the slogans outside the Refrigeration School on Washington, the shape of South Mountain from Tempe Town Lake – in a way I wouldn’t be if I spent my time on the freeway.

I could go on. Cycling keeps me fit (well – fitter than I would be if I drove), I never have to worry about parking, and, of course, I rarely get car sick any more. But I want to end with two points. The first is to say that, as pleasurable as my lifestyle is, it’s also hedonistic in the sense of being fairly self-centred. I don’t have kids or commitments and make my choices accordingly: I’m aware that not everyone would be able to give up the advantages of driving in the way I have quite happily done.

The final point is an anecdote. Last week I’d been stocking up on books and groceries down at McClintock and Guadalupe and was waiting for a bus to take me to the light rail to take me home. I was festooned with bags – my purse, my laptop, a bag of books, two canvas bags of food and drink – and had had a long day. I wanted to be home – but, still, sitting in the cool air at the bus stop watching the sun set, the silhouette of trees against the sky, the zip and roar of traffic, hearing the manic chatter of birds at dusk, I thought: I’m really very happy to be here.