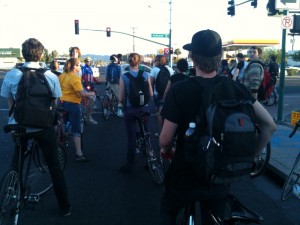 Yesterday, I posted part I of my conversation with Phoenix’s Urban Laureate for 2010, Kevin Kellogg.  Make sure to check it out if you missed it.  Today, let’s continue with part II:

Kevin on why historic preservation is important:

Obviously I think we should be preserving our historic buildings.  It’s a travesty what’s happened so far.  It just never ends.  Something’s older than 10 years old and we just tear it down.  It really makes it hard to be unique.  We just don’t have the mentality, it’s a throw-away society.  If we’re going to save buildings it’s because we want buildings saved.  We need preservation groups and we need them to lock arms in front of buildings that are threatened and we need to find ways to purchase these properties to preserve them or find property owners that will preserve them.  The government can only do so much.  They can make it impossible to tear some of this stuff down.  But a lot of it doesn’t really qualify as historic but it’s still a part of our history.

You see it already starting to happen.  There are already these historical societies which in other cities are so out of control that they call them hysterical societies. I’ve had to work with people in the Bay Area where if your building doesn’t look like a Victorian, you’re the devil.  We need to have both best of the adversarial and also the positive.  We do need advocacy groups that will oppose the destruction of historic assets no matter what they are.  And I include plants in that too. I’m more focused on desert and land but I think it’s the same mentality.

Keep what you have that’s good and appreciate it.  That’s part of building a good society too.  In other cities they’ve created amazing places where good and old intertwine and that is the best.  That movie Fight Club, where the guy says, I just wanted to destroy something beautiful.  It’s part of the anarchist punker mentality here.  What should we do?  Let’s burn something down.  It does have to come from the community because if we as a community don’t care it’s going to get torn down.  We have to be responsible for that.  All the tools that you can use, assembling, writing letters, making phone calls, organizing, raising money, just making people aware of what’s going on.  I loved what was going on with the Sahara.  That’s not over.  They took down some of the not so good parts of the building, not the concrete, they just took down the wood frame side, that’s what it looked like to me.  But they didn’t tear the whole thing down.  So it would be interesting to see what happens.  They’ll put a law school there.  But on every side of the lot you face a loading dock of other big buildings.

On what Phoenix could learn from cities like San Francisco and Boston:

One of the things that’s counter intuitive here is that actually more regulation is better.  It raises values, it creates a more stable property environment, it protects people’s rights.  The general mantra here is get rid of government and everything will be good.  And I just don’t believe that.  Our system has yielded the worst metrics in the country.  So what does that tell you?  By all measures, it’s not a good system.  If you look at San Francisco and Boston, they’re doing way way better.  They still have their struggles, but San Francisco’s residential values haven’t diminished as much, Boston’s haven’t diminished as much.  Some of this is state mentality.

You would think Phoenix is now a college town just like Tempe, but there’s such a low regard for education here.  So many people don’t have college educations, don’t value it, and it’s almost (considered) snobby.  I went to Harvard and when I got back here, it was detrimental to getting a job!  It helped me get a job at ASU, but it didn’t help me at all getting a job in the profession.  Embracing your intellectuals is a good thing.  These other cities have done it, smart people are not the enemy.  (Phoenix) is anti-intellectual for sure.

And I think historic preservation is an important thing to learn.

And how do we create public discourse?

You have to let it flow.  You can’t shut everything down.  Everything here goes into a private conversation.  So we don’t have an open debate about things.  We have statements, but that’s it.  And the paper doesn’t pick it up.  And there aren’t independent journalists.  And there’s no independent newspaper.  The TV new stations do stuff, but there’s so much fatigue around baseless media.  I think it’s not only Phoenix where this is a problem.  I think part of it is the economy and part of it is the nature of all the anxiety and the churning of the media world.  Like a blogger wasn’t even a thing ten years ago.  Myself and other friends who would write missives on email would blast our friends and that was really the original blogger.  Now it’s so easy to get online and to post and to comment.  And it’s all free.

But I think it playing out in the public is better.  I think assembly, getting people together is huge.  That’s what I like about Critical Mass.  People get together, you see the other people, you smell them, you get a feel for what they look like, and how they move.  We need more of that, way way more.  Other than just going to ball games.  We need more ability to be together and hang out together.  Look how popular the farmers market is.  I went last night, it’s 115 degrees and people are eating grapes and drinking wine and hanging out.

On what he wants to leave behind after this year of being Phoenix’s Urban Laureate:

If I provoke a few conversations that outlive me,  I’ll be happy.   If I can instigate something I think I’ll be happy.  My end goal is to leave some kind of evidence, I’m making this movie about how it could be different.  About how we can get a real vision for (Phoenix), kind of as a missing piece.  It’s like putting a pacemaker on it, like having a heart.  That’s what I’ll be spending the next year doing.  We’ll be pretty close on most of the collateral in the next month.  It’ll be a half hour (documentary).

It’s totally Phoenix.  It’s really about a way of thinking about developing a community.  It’s partially about voices and about inclusivity and having a community conversation and a public dialogue.  Part of is about just good planning.  And I don’t think we do good planning.  That’s one of the challenges we basically forgot to mention is, we don’t do the numbers.  we don’t even do the back of the envelope calculations.  Everything is so mythical here.  We say that 6 million people are moving here and we have to get ready for that.  I question where are they moving from, why are they moving here, how do we know that?  Do we want them to?  We don’t have enough jobs for the people who are here and we’re going to bring more people here?

So part of the movie, and it’s not just me, it’s a whole team of people, is about how we insert intelligence into the mix and that it’s not just snakeoil and optimism but actually do some calculations, get some measurements and indicators and that we think about sustainability rather than just growth.  The third part of it is to visualize a transformation.  Sometimes it’s a lot of little moves, I think the big moves have gotten to where we are and now we need the little moves to fill in around the blanks.

There’s been a lot of damage done, a lot of half ass stuff has been done and we need to tidy it up.  I think in the process, that’s how we create the good places.  With time spent together and adding all the good stuff.  We’ve got the big chunks and now we need to fill it in and make it better.  I think a lot of people have what they want, a house they can afford, a job, maybe a family, their friends, maybe a business, and they can survive and they can thrive.  And I don’t mean to critique any of it.  I just think we need alternatives.  We need to embrace a larger spectrum of society and we need to understand what’s changing.  And not everything we’ve been doing has been good so we need to add some good stuff in.

I’m very much looking forward to this movie and I can assure Kevin that he’s already managed to instigate some valuable conversations, some valuable inquiries about how we can add the good stuff to our city. I hope we can continue the conversation on this blog, leave me a comment about what Kevin had to say.