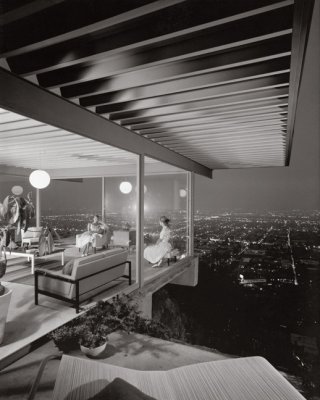 If You Have Good Taste in Design, You Won’t Want to Miss This Film

Last week I had the pleasure of previewing the film Visual Acoustics: The Modernism of Julius Shulman with Steve Weiss of No Festival Required at the Phoenix Art Museum.  To be honest, and this is a little embarrassing coming from an architect who loves modernism, I had never heard of Julius Shulman before so I didn’t quite know what to expect.  It turns out I had been seeing his work throughout my education and career without even knowing it.

Julius Shulman is only the most renown architectural photographer of the past century and this movie is a story of his life’s work.  It gives you a dazzling portrait of modernism starting with when it first began in the 1920’s with such towering figures as Walter Gropius, Le Corbusier and Mies Van Der Rohe.  It’s as much about the architects and architecture of modernism as it is about Schulman and his life’s work, which makes it a visually stunning experience.

The movie features these gems such as Pierre Koenig’s Case Study House No. 22 in Los Angeles.  I’m sure you’ve seen either this photograph or this house in a movie at some time or another, which is completely thanks to Shulman. 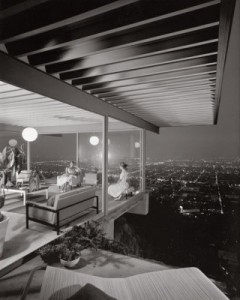 What we find out is that Shulman’s photographs of these buildings often made them look better than they were in real-life. In fact, it was this photograph of Shulman’s that catapulted Koenig’s Case Study House into worldwide fame.

This movie gives due deference to the work of superstar architects like Richard Neutra, Rudolph Schindler and of course Frank Lloyd Wright.  But what I most enjoyed about the movie is that it featured some lesser-known but gorgeous projects by architects whose names you might never have heard of.  For example, the movie showed the work of Albert Frey in Palm Springs which thankfully is only a few hours away because you WILL want to make a trip there after watching this movie. 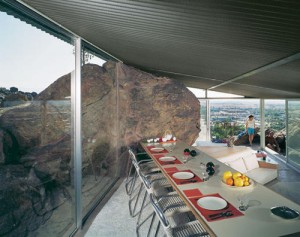 Interestingly, we learn that Shulman himself was an avid environmentalist.  He appreciated the reverence that modern architects showed of nature which they expressed either by glorifying it with breathtaking views or actually making it a part of the building.  Check out that rock in the middle of the living room!  Frey was known to embrace and respect the desert with his architecture, something we could still learn from today. With Shulman being from LA, much of the movie shows modern buildings in the desert.  It’s an extra-special treat for us desert-dwellers to see how these modern architects incorporated the desert into their phenomenal projects.

As you can probably tell, I was enamored with the buildings that were shown in the movie, in holy rapture watching one beautiful image after another.  But the movie is not about the buildings, but about the contribution that Julius Shulman made to modern architecture and to us today.  He wasn’t merely a photographer, he was a taste-maker of the time.  He was able to catapult buildings and architects into stardom through his photographs.  In fact, he defined what good architecture was and luckily he knew what he was talking about.  If it weren’t for him, we wouldn’t have the faintest idea of those original mid-century modern works, much less be experiencing today’s revival of modernism.  We owe him a great debt for bringing modern architecture to life in his photographs.  We owe him an even greater debt for preserving mid-century modern architecture for us even after so much of it has been destroyed or has become dilapidated.

If you like modern architecture or design, whether contemporary or mid-century, you will LOVE this movie.  There’s nothing quite like the modern buildings of the 50s and 60s and on top of that, those buildings as photographed by Shulman’s discerning eye.  But I recommend this movie even more so to those of you who don’t know much about modern architecture.  What a fabulous education you will get with this movie through Schulman’s stunning photography!

Steve Weiss, photographer, cinema aficionado and community activist, is bringing this movie to us as part of his No Festival Required monthly screenings.  It’s playing this Sunday March 28th at 1pm at the Phoenix Art Museum.  This screening is also the kick-off event for The 6th Annual Modern Phoenix Home Tour + Expo which will be a week-long series of events celebrating modern architecture here in Phoenix.  Don’t miss it!