Why We Are Surrounded by Crappy Buildings

This weekend a client was driving me to a house to show me the style she’d like for some renovations at her house.  I half expected to be shown a run-of-the mill stucco cookie-cutter home with little personality but that somehow seems luxurious to people.  This isn’t a reflection on my client but on most people I’ve run into who aren’t designers themselves.

I was shocked and relieved that she showed me this beautiful ultra-modern renovation of a mid-century modern home: 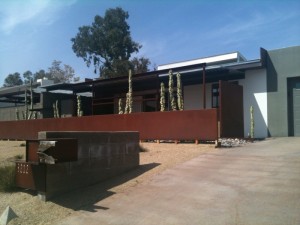 The owner of this house directed us a few blocks north of him telling us that there was a whole neighborhood of mid-century modern homes renovated by local architects and designers.  Both my client and I were intrigued and it turns out that he had directed us to Paradise Gardens, a housing development in Phoenix originally designed by the mid-century modern architect extraordinaire Al Beadle.   In fact, Modern Phoenix is doing a tour of this neighborhood for their Modern Phoenix Home Tour + Expo on April 11.

Needless to say, both my client and I were extremely impressed not only by the fabulous renovations of the homes, but the original 1960’s design underneath the renovations: 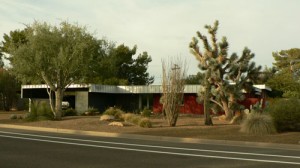 I looked up the Paradise Gardens neighborhood on the Modern Phoenix website and found this wonderful article by David Tyda talking about its dappled design history.  It intrigued me that these homes were originally an attempt to bring good design to the masses.  Al Beadle worked with developer Robert Altherr to bring desert-appropriate modern architecture to tract housing.  If you read the article, you’ll find this was a somewhat failed attempt as Al Beadle ended up leaving the project and the homes got built anyway, not necessarily as he designed them.  But even with this snafoo, the homes are sited well on their lots, have wonderful front and back yards and have that indelible mid-century modern Beadle composition.

What’s become of these homes 50 years after they were built?  The good news is that some of the Valley’s premier architects and designers have bought and/or renovated many of these homes using them as fantastic canvases on which to express their craft.  So the Modern Phoenix tour of this neighborhood will definitely be a delicious treat.

But the question still remains, has the goal of bringing good design to the masses been achieved?  Sadly the answer is a resounding no.  Two things point to this conclusion.  Many of the homes are now owned by designers and architects, which means that most non-designers didn’t see the value of these homes.  Another more obvious reason is that this kind of design didn’t really catch on with tract housing.  What we see for the most part around the valley is the stuccoed mediocrity that I expected my client to show me.  In fact, those homes in Paradise Gardens that were not renovated by architects or designers were stuccoed over to look more like the “normal” houses in the neighborhood.

What this tells me is that we’ve failed as architects and designers to educate the masses about good design.  What we do is talk amongst ourselves about design while real-estate developers continue to build crappy buildings that they think the masses will like.  And let’s face it, the masses DO like the ugly stuff otherwise it wouldn’t be built over and over again all around us.  We have no one to blame but ourselves for this in the design profession.

Let’s stop admiring our own work and start spreading our expertise and talent with the world before everything looks like this:

Tags: a return to paradise, al beadle, mid-century modern, modern phoenix, modern phoenix home tour and expo, paradise garderns, tract housing
« Shade the Rocks to Cool the House  |  If You Have Good Taste in Design, You Won’t Want to Miss This Film »