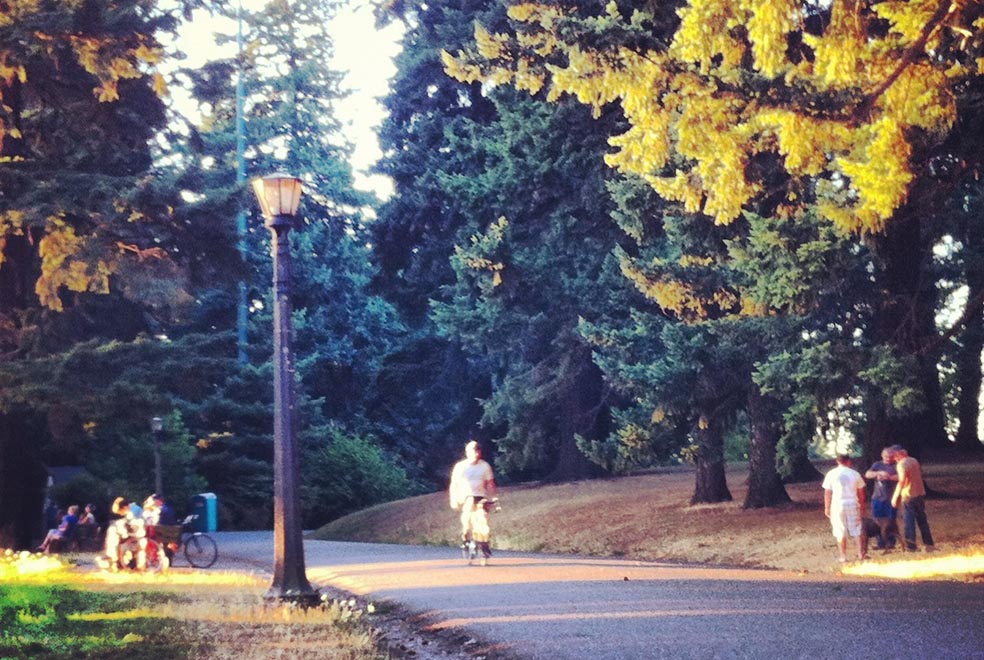 When you hear the name Olmsted, you typically think of Frederick Law Olmsted, who designed Central Park in New York City. But another set of Olmsteds played a big part in the open space planning of Portland in the turn of the century – Frederick’s sons, John and Charles Olmsted.

Between 1885 and 1915, Portland’s population grew by 300%. Due to concerns over this astronomic growth, and also because of the City Beautiful Movement of the time, the Olmsted brothers were commissioned to come up with a long range open space plan in the early 1900s. The City Beautiful Movement was about introducing natural beauty through city parks to urban environments in the hope of inducing “civic virtue” among the urban population. The Olmsted brothers came up with the Olmsted Plan of 1903 in that vein, and much of their plan was implemented over the next 100 years.

The Olmsted Plan provided a vision for parks connected by parkways and boulevards. Mount Tabor Park, Willamette Park, Terwilliger Boulevard and Leif Erikson Drive were all called for in the Olmsted Plan. Today’s “40-Mile Loop,” 160 miles of bicycle/pedestrian trails connecting many of Portland’s parks, was named after the approximately 40-mile-long system of boulevards and parkways that the Olmsteds proposed. [Source: VisionPDX] 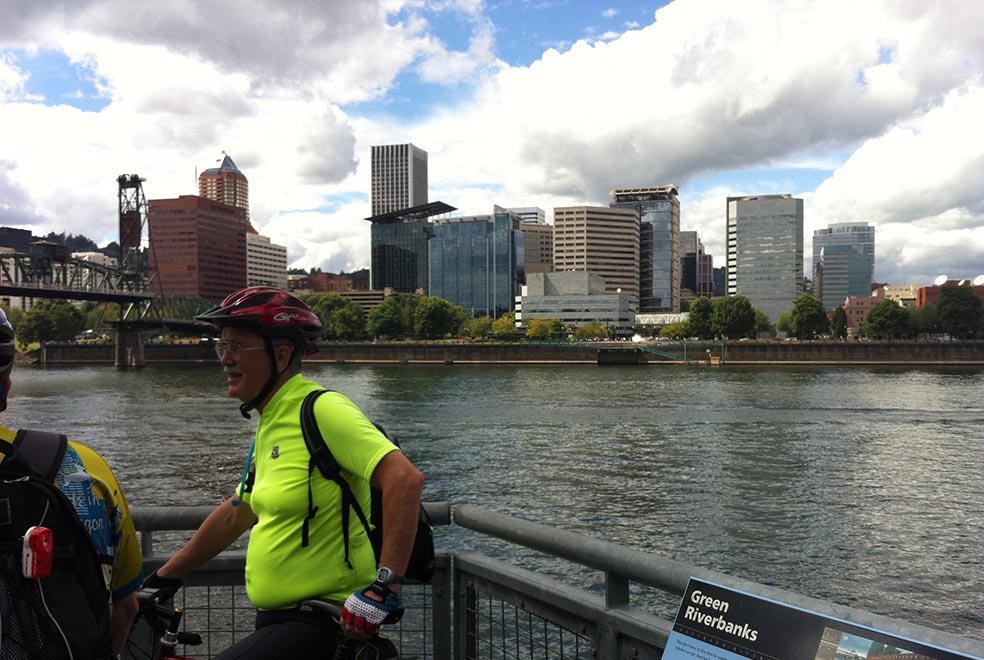 It turns out the Olmsteds did not envision a east bank waterfront park. The waterfront at the turn of the century was a highly industrial place with factories and ships and was considered dirty and utilitarian. It wasn’t until the Bartholomew Report of 1932 created by Harland Bartholomew that a east-bank river park in downtown Portland was envisioned.

A little further south along the Willamette, the Olmsteds did envision park spaces, on the east bank and in the Tryon area, which are now both green spaces. They also planned for Ross Island to become a park space. 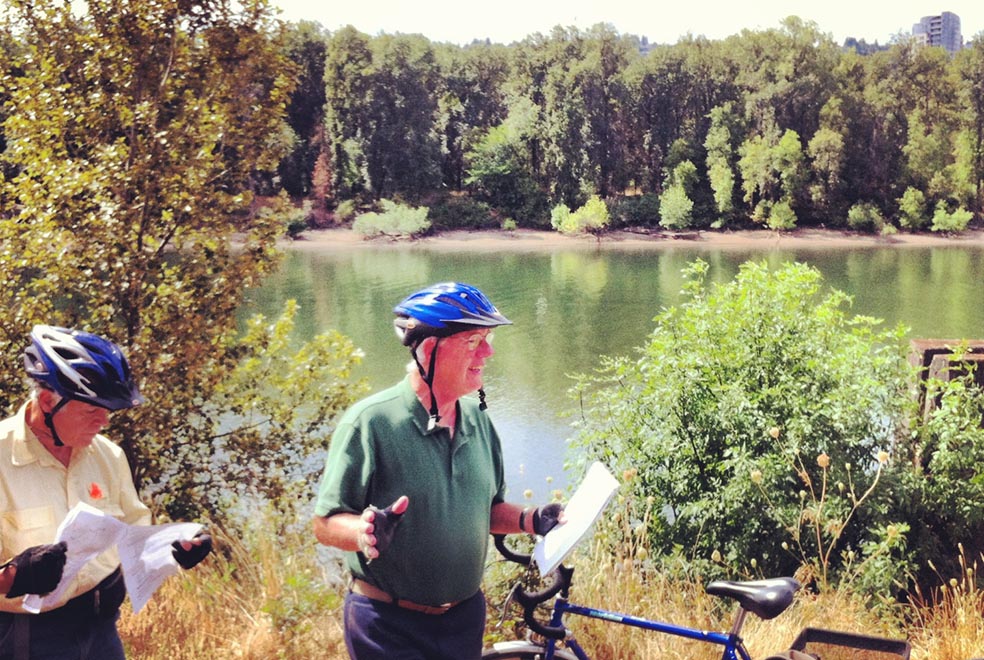 Until now, Ross Island has been privately owned by a sand and gravel company, but the City is planning to acquire it and turn it into a park once it’s been remediated.

We continued down the Springwater Corridor and stopped at Oaks Amusement Park, which is an early, turn of the century example of an amusement park and is still in operation today.

Further along the way, we stopped at the fantastic Sellwood park, which was designed by Emanuel Mische. Mische was handpicked by the Olmsted brothers to become the Parks Commissioner in 1909 so that he would implement their plan. The Olmsted brothers, like their father, did not design parks for people to play in them, with playgrounds and other recreational amenities. They designed parks as visual green respites from harsh city life. 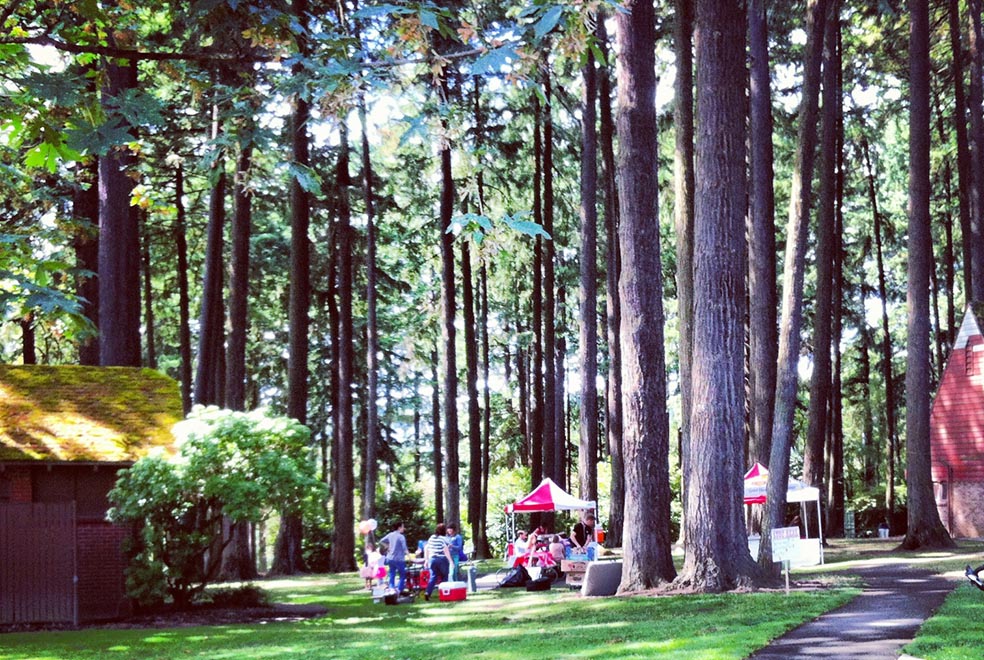 So originally, Sellwood Park did not include a playground, but one was soon added and it is one of the original playgrounds in Portland.

From Sellwood Park, we biked on the Sellwood Bluff, which was planned to be a parkway by the Olmsteds. It never became the full parkway the brothers intended, but it does afford stunning views of Downtown and the West Hills. 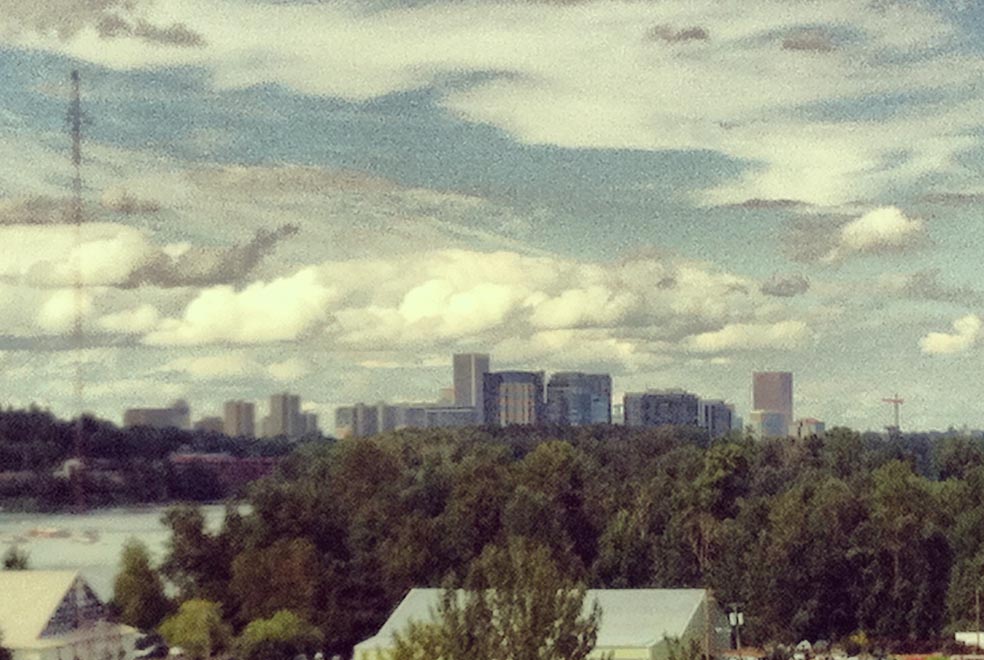 We continued from the bluff all the way to the Eastmoreland Neighborhood, which was purportedly designed by the Olmsteds, though this is not confirmed. What is confirmed is that they designed an informal residence park which is a gorgeous central green space that cuts right through the middle of the neighborhood. 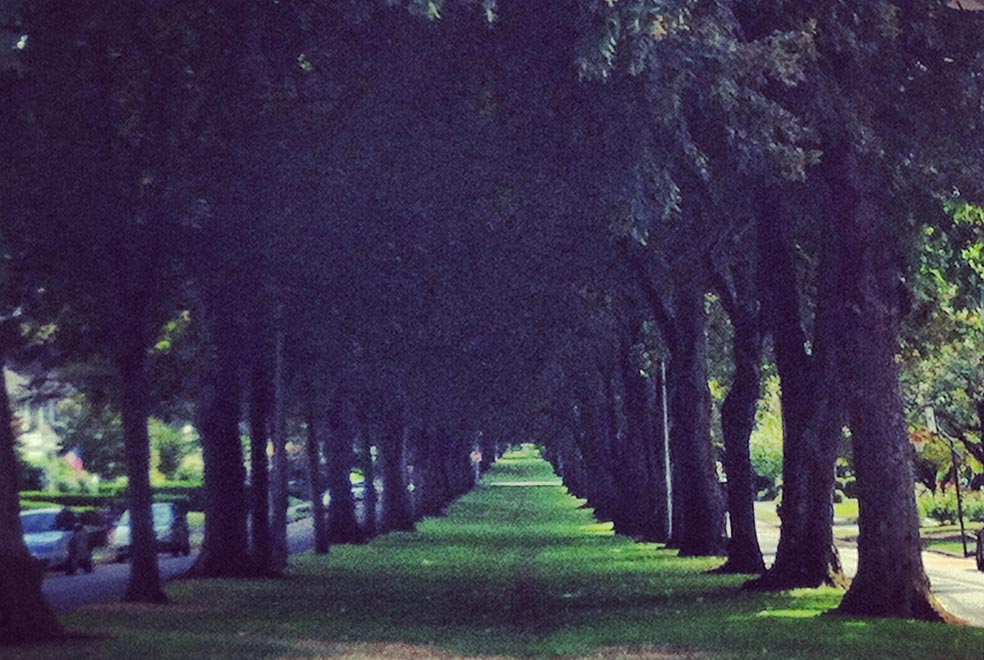 This green space was the centerpiece of the street and the homes were designed around it. Too bad the luxurious green space is not fitted with benches, but the Olmsteds intended for people to move through it, not hang around in it, perhaps to maintain a pristine and upscale environment.

After visiting the quite Eastmoreland neighborhood, we biked over to the Reed College campus, which was also designed by the Olmsteds. The Great Lawn facing Woodstock Road is gorgeous, but not a product of the Olmsted vision. That space, in their original plan, was slated for some formal diamond gardens and some additional buildings, but the college ran out of money before they could complete those. 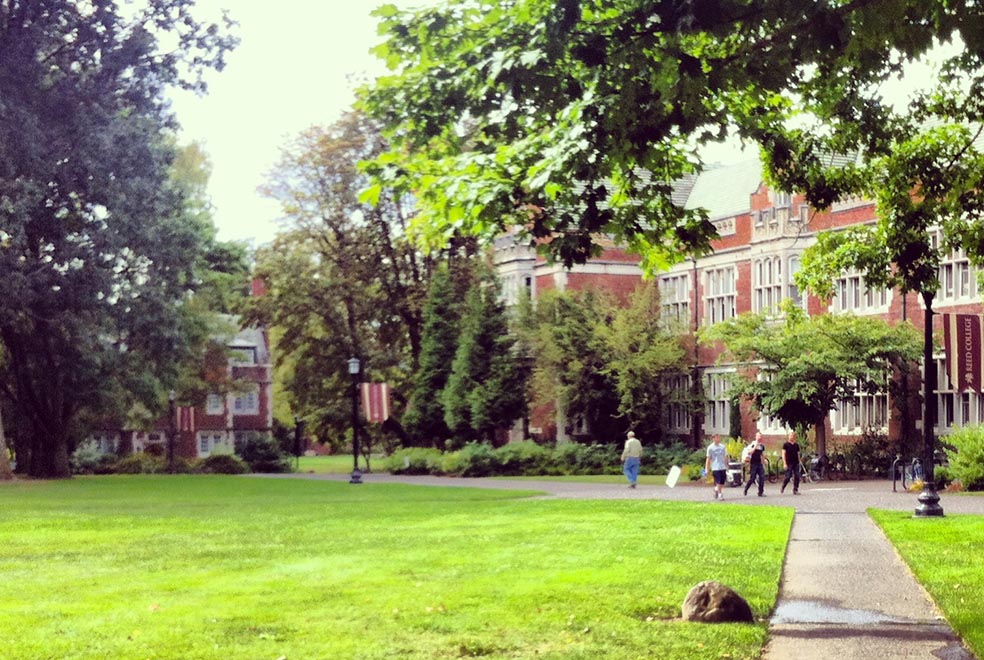 So a vast green space was left, which has become beloved by generations of Reed students and staff. Additional open green space on the Reed College Campus is a beautiful canyon, which is open to the public, and which we experienced on the tour via a great pedestrian bridge that spans it.

From Reed College, we headed to Kenilworth Park, designed in the Olmsted tradition by Mische. It is a mini version of Sellwood Park in many ways. This park is home to a great historic bathroom structure designed by Ellis Lawrence in 1915.

Park bathrooms are generally under-appreciated, but are often great works of architecture.

Laurelhurst Park is one of my favorite parks in Portland, and that says a lot because Portland has some fantastic parks. Laurelhurst was designed by Mische in close keeping with the Olmsted vision for parks. John Olmsted designed the surrounding Laurelhurst neighborhood. 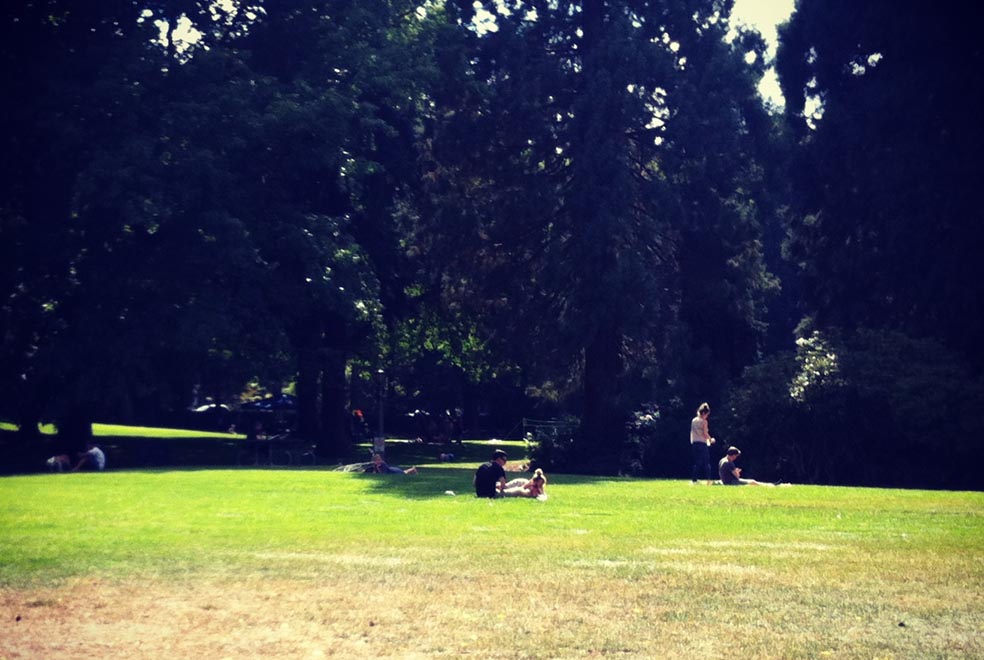 Laurelhurst is a combination of intimate spaces created by winding paths that follow the terrain, and large open spaces which provide long vistas, a central theme in Olmsted parks.

From Laurelhurst, we headed towards Ladd’s Addition.  We biked through the beautiful Lone Fir cemetery on Belmont and SE 20th on the way. It turns out that this cemetery is planning to take on a more park like setting and be open to the public and host events. Cemeteries turning into parks is a national trend as open green space becomes more and more scarce in urban environments.

After passing through the Lone Fir Cemetery, we arrived at Ladd’s Addition neighborhood, which was developed by William S. Ladd, a merchant and mid-19th-century Portland mayor. Ladd eventually became the richest man in the Pacific Northwest, thanks to his real-estate development ventures. Ladd’s Addition was platted in the 1890s but it wasn’t built out until around 1909. The development includes some very formal park elements, such as Ladd’s Circle and the diamond gardens. Ladd’s Circle was one of the original traffic calming devices and was meant to be a visual organizing element, and not really a park to be inhabited. But in the 1980s, the City of Portland opened the center of Ladd’s Circle as it had become home to nefarious activities. 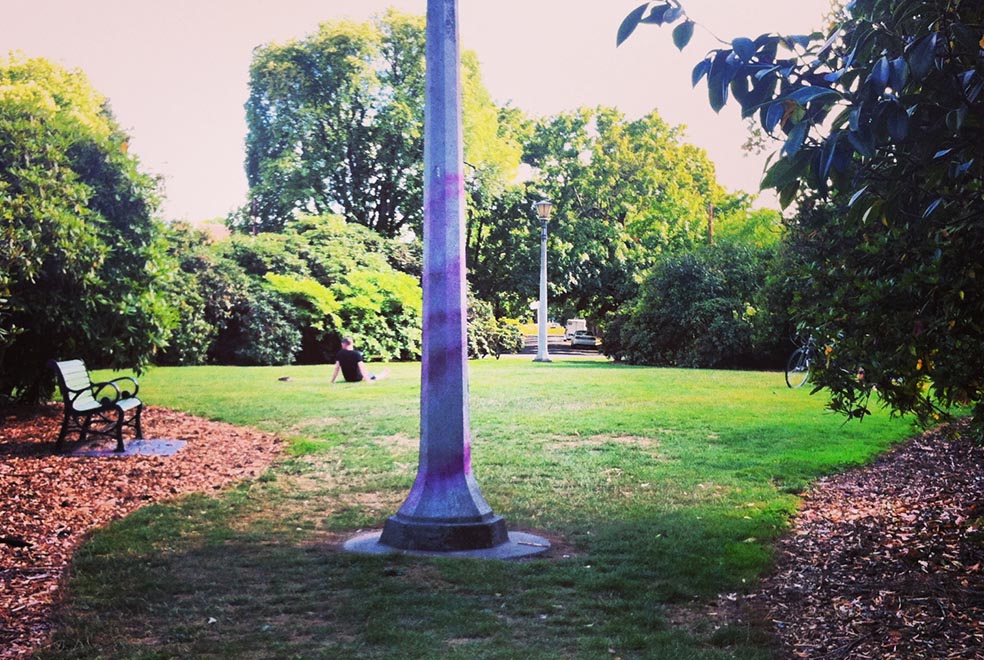 Today, the Circle has a beautiful park inside of it, which is a lovely place to get away and get some respite from the hustle and bustle of life. And in terms of the traffic calming purpose of Ladd’s Circle, it is very much in play today as the area is a haven for bicycle commuters, seeing upwards of 4,000 bicyclists a day!

It’s impressive that Portland had the insight not only to commission the Olmsted brothers to come up with a long-range open space plan, but to implement many parts of the plan over the years. The Olmsteds put forth a great blueprint of open spaces and connective car-free greenways which continue to evolve to serve changing needs, but remain true to the original vision. It’s wonderful to reap the benefit of their vision some 110 years later!