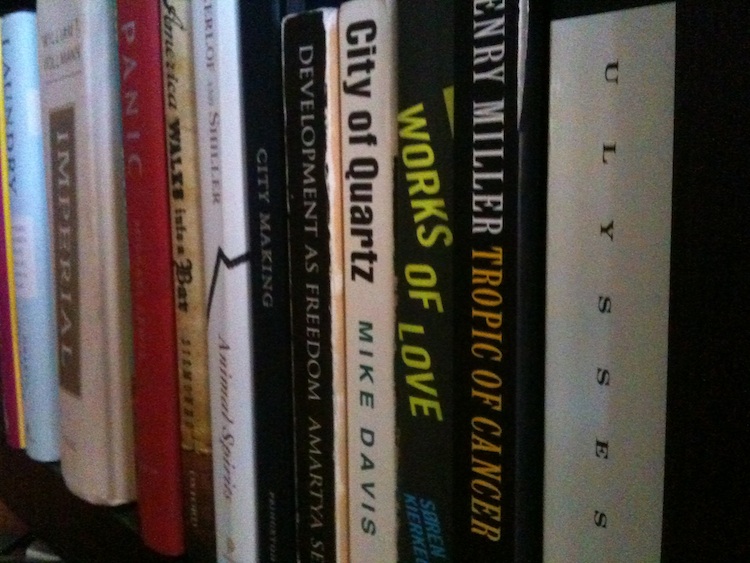 I did not notice her when she boarded the bus. She was nondescriptly dressed, as was her friend.  Not quite hipster casual, nor professional. I still have no idea what she looked like. Cute, I imagine. In all likelihood she worked at either Pixar or Novartis or one of the myriad number of companies that call Emeryville, California home. Maybe it was my old-fashioned commuter etiquette – wherein one keeps to oneself – but she could easily have been one of a thousand other women that were taking the train or bus that afternoon. Chattering away with her friend, the only thing I remember about her was that she had a copy of Herman Hesse’s Siddhartha open, and divided her attention between the book and her friend. I imagined asking her about Schopenhauer’s influence on Hesse, but as our bus neared the BART station, the impulse quickly faded.

Hesse, and the anonymous woman on the bus for that matter, was less on my mind that day than another reader – one whose enigmatic tastes ran more towards Hunter S. Thompson and José Saramago. At the time, she was engrossed in Hemingway’s Nick Adams Stories. With a few hours to kill after heading to a brunch that day, I decided to wander through a number of bookstores with no particular purpose in mind other than to browse for an appropriate gift. We were slowly developing a friendship that was based on a patchwork quilt of shared musical tastes, dissections of cinematography, and random conversations about topics that ranged from art to her occasional misanthropic tendencies. I had no choice but to browse, and to dive deep into past conversations in order to figure out what she might enjoy.

It was a task that would be tough to accomplish in Central Phoenix these days. With no bookstores worthy of the appellation, I would never be able to dedicate the amount of time necessary to finding the right book without decamping to Changing Hands in South Tempe.  Hell, even the last of the corporate bricks-and-mortar bookstores, Barnes and Noble, doesn’t have any locations near Central Phoenix.

Or are there? The most literate Phoenicians I come across outside of the academy have aggregated in and around its core, or at least have an affinity for the place-making project that downtown Phoenix has become. For them, intellectualism is neither anathema nor something to be disparaged; it does not consist of idle spectatorship, but rather engagement with the messy realities of the world as it is. Their literacy recognizes the limitations of their own knowledge and experience, consciously seeking to expand that knowledge and experience of the world through the act of reading. Their literacy is neither content to accept a statement at face value, nor unwilling to adapt as circumstances change.

I am not suggesting that the balance of our fair city (and state) is comprised of illiterate naïfs. I’ll leave that presumption to the rest of the country, especially given the damage done to our collective reputation by a few of our elected officials.

I am, however, going to go out on a limb and suggest that being literate is a hell of a lot sexier than having a great spray on tan. Our bodies will age, despite what your favorite Scottsdale plastic surgeon/witch doctor may tell you. But feeding those synapses with a good book on a regular basis will keep your brain supple long after your bits sag.

I eventually accomplished my goal of finding the right book, only to eventually find that my reader friend already had her own copy of Bolaño’s 2666. But as I was browsing that morning I knew that the gravitational pull of her character was less about her physical characteristics (she remains devastatingly beautiful) and more about her curiosity, intelligence, and entrepreneurial drive. Of equal importance, I realized how deep a void one could be left with absent literacy.

All of which is to say that I have been in a rather despondent mood lately, as I impatiently wait for the Venue Projects guys to start working on the Beefeaters building. I may even start a collection for Changing Hands Bookstore so they can finish their tenant improvements without compromising the breadth of their book selection.  Anything so we can get a bookstore back to Central Phoenix.

After all, I still have some browsing to do.