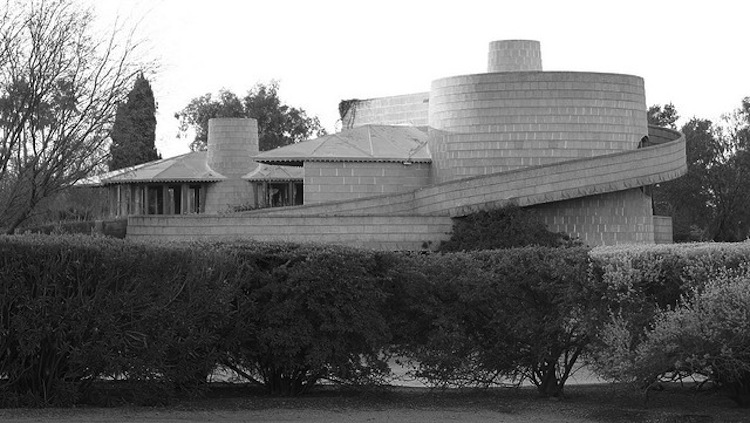 A Preservation Victory: Frank Lloyd Wright House No Longer Under Threat of Demolition

The decision to initiate a historic overlay and landmark designation process for the David Wright House at the Planning Commission meeting on Tuesday June 12 came surprisingly quickly. Only Zoning Attorney and former Phoenix Historic Preservation Commissioner Grady Gammage spoke, though many others had prepared remarks in support of the motion to help save the historic landmark from possible demolition. Among the attendees and those who had prepared to speak were some heavy hitters on the local architecture scene including Eddie Jones, Wendell Burnette, Phil Weddle, Jack Black, and Matthew Salenger.

Gammage spoke eloquently, emphasizing that the Commission wasn’t deciding anything with their vote other than just initiating a process that would allow further examination about whether or not the David Wright House should be protected by a historic overlay and designation. He then succinctly summed up the reasons why this house should be protected, or at the very least, be considered for protection including the fact that it’s a Frank Lloyd Wright-designed home, a very personal example of his work as it was for his son, and the only example of his residential work that follows the circular partii found in the Guggenheim Museum in New York. Gammage’s remarks as well as the overwhelming support from the community on this matter led to a unanimous vote from the Commission to initate the historic overlay and landmark designation process, so a small victory was achieved on Tuesday.

A bigger victory came later when some influential figures, in particular Mayor Greg Stanton, spoke to the new owners of the house and educated them about the significance of this building and why it should be saved. While initially the owners planned to split the lot and redevelop the land for profit, which very likely would have meant the destruction of the David Wright House, they have thankfully had a change of heart.

“In a nutshell, not only do we desire to maintain the integrity of the property, but also make sure that the neighborhood and the Conservancy are happy,” said new owner Steve Sells of 8081 Meridian as reported by the Arizona Republic. Sells and his partner John Hoffman have agreed to work closely with the Historic Preservation Office at the City of Phoenix as they proceed with their plans.

Since many of the people who attended were not able to present their remarks, I am including some of them in this post at the behest of Louise Roman and Jim McPherson. These letters of support show that the local community is finally engaged and will not hesitate to speak up on behalf of preserving the architectural and historic landmarks in Arizona for future generations.
The Gladys and David Wright House is located at Exeter and Rubicon in Phoenix, Arizona. I ask you: What man-made mark could be better on this land, in this time, than this house?  A house designed by a genius, long lived in and loved by a family, a house built to catch the cool breezes and views across the Valley’s skyline, over the tops of the orange groves to the south, or toward Camelback Mountain to the north. Consider its location, a short distance from the life sustaining canals, first engineered by the Hohokam. Consider the nearby, now protected, prehistoric mound structures of the Pueblo Grande site. Consider the thread of optimism and the celebration of the horizon that stitch these extraordinary works together.Forty-five years ago on my first pilgrimage to this house I realized this was not just another FLLW house, but a fully mature master-work, a vibrantly original invention of space, filled with inspiring lessons for all who might be fortunate enough to experience it. Today we are reminded that architecture is, paradoxically, a fragile art form.  Mega-houses press in on the Gladys and David Wright house. But the power of its architecture endures and we know that its erasure would be a shameful act. So we resist the erasure of its particular excellence. We resist the erasure of its boldly experimental ideas. It is a house of this place and of its time, but timeless in its significance. I call for private and public efforts, indeed leadership, to bring this house into its rightful company, the great house museums of our time: the Gamble House, the Farnsworth House, Fallingwater.  Indeed, I ask you to honor and preserve this house because of its singular place in the built legacy of FLLW. This house is our evidence of Mr. Wright’s love affair with our Valley, a love affair that we desperately need and want to learn from and be inspired by. The preservation of the Gladys and David Wright house will be our touch-stone, our acknowledgement that our history informs our future, our celebration of, and call for, excellence in our community. – Will Bruder, architect and president at Will Bruder + Partners
As an architect with 40 years invested in making our community better, I was very proud to see the prominent turnout of top leadership, representing the best of art and architecture, attending the commission meeting on June 12th. It is clear there is a majority of professional support backing your decision to begin the process guaranteeing protection of the David and Gladys Wright House. It can be said its significance is now tied to your significance. Admittedly, I do not understand the legal ramifications or financial implications your efforts will encounter but I am sure they will, at times, seem insurmountable. Nevertheless, know your commission can count on continued, focused, and assertive support from the professional and academic community. My office, Jones Studio, Inc. is in unanimous agreement there can be no outcome other than full Historic Preservation overlay and Landmark Status. A city unable to prevent the destruction of such an important architectural masterpiece is unthinkable. Therefore, we will depend on one another to do the hard work securing the treasures which make our community unique. – Eddie Jones, architect and principal at Jones Studio
Debra Stark, I believe strongly that our cities gain value as its citizens value the natural and built environments within them. It is with this passion that I strongly urge you to carefully consider the rare and few built legacies we have within the City of Phoenix. The 1952 Gladys and David Wright House is one of the most significant Frank Lloyd Wright houses within Phoenix and I strongly suggest that the City do everything within its power to insure its protection. It is most unfortunate that this structure is being threatened with demolition and redevelopment of the land, therefore, I am happy to hear that last night the Planning Commission initiated the Historical Preservation Overlay & Landmark designation for the property. I am in complete support for this house to be granted Landmark designation and hope we will soon learn of plans for its restoration and preservation. – Jack DeBartolo 3, architect and president at DeBartolo Architects

Phoenix and Arizona are very fortunate to have had a history that includes the work and presence of one of the few true geniuses produced by American culture, Frank Lloyd Wright. In the field of architecture he is, undoubtedly, of giant stature, and the pilgrimages made by multitudes to Taliesin West attest to his cultural importance. The destruction of one of his other major works in Arizona would be an act of careless ignorance that would confirm, in the world’s eyes, that economic gain is the sole standard against which we judge the appropriateness of our actions. As this community continues its rise as a culturally significant metropolis to acquiesce to such a destructive action would be a reversal that would stigmatize us, whereas finding a way to obviate it would be another very positive step that would confirm our optimistic vision. – John Meunier, professor and former Dean of the School of Architecture at ASU

Mr. Chairman and Members of the Commission, my name is Jim McPherson. I reside at 914 East Osborn Road, and I serve as board president of the Arizona Preservation Foundation, our statewide not-for-profit historic preservation organization. The Foundation of course supports historic preservation designation for this landmark property… after all “preservation” is our middle name. But I’d like to put this day and the decision you are about to make in the context of other recent developments. The growth of the Modern Phoenix movement has been phenomenal, with more and more homeowners and potential homeowners understanding the likes of Haver and Beadle and renovating their midcentury homes and improving our post-World War II neighborhoods, such as Pierson Place and Marion Estates.  Annual home tours and expos showcasing midcentury architecture are extremely popular, especially, we’re seeing, with the millennial population that is embracing a more urban sensibility in where they chose to live and work. The City Historic Preservation Office published a brochure and partnered with the Office of Arts and Culture to commission a photo exhibit of important “Midcentury Marvels.”  These proved so popular that the City Historic Preservation Office and local architect Don Ryden published the impressive coffee table book, also titled “Midcentury Marvels,” now in its second printing. Prior to his election as Mayor, candidate Stanton included in his 100 Day Plan the following plank, and I quote: “Midcentury architecture exists all across our city, and protecting these assets is an important part of preserving our heritage and telling our story. The Historic Preservation Commission must identify our midcentury marvels in every part of Phoenix and generate creative ways to protect these buildings.” After his election, Mayor Stanton took time out of his busy schedule to speak before the Historic Preservation Commission and reiterate his request. The Commission followed up and appointed Alison King, founder and principal of Modern Phoenix, and Taz Loomans, a local architect and member of the Commission, to chair a subcommittee. They have begun their work. Partnering with several City departments, Liz Wilson in the Historic Preservation Office is undertaking a comprehensive study of Post World War II residential neighborhoods. It is also important to recognize the efforts of the City’s Adaptive Reuse Task Force in helping to facilitate the renovation of numerous vintage and historic buildings, already and yet to occur. Thanks to everyone who showed up on such short notice to attend and speak out on behalf of our city and its heritage. I’m proud to call many of you friends. And thank you members of the Commission for your service to our City. May your decision today be another important catalyst to moving our city forward in protecting our unique recent past and situating our place in the realm of great American cities. – Jim McPherson, President of the Arizona Preservation Foundation