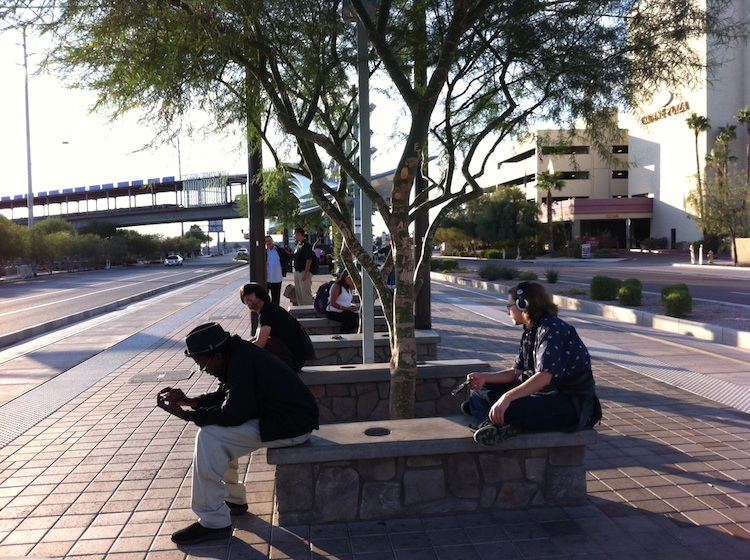 What I Learned from Living Without a Car for a Week in Phoenix: Part II

Last week, Paul and I made a commitment to go car-free for a week, to test out what it would be like to get around the city without a car. On Monday, I posted Part I of the What I Learned from Living Without a Car for a Week in Phoenix series which reports on our experiences.

Today I’m going to talk about the nitty gritty reality of going car-free.

Paul normally takes the car to work. Last week he rode his bike to the bus stop and rode the bus to and from work. (He will be writing a guest post about his experiences for this series, look for his article next week!)

Our nights and weekend were the times that were most impacted by our car-freedom, as that is when we most use our car. We found that we had to change some of our nighttime and weekend habits to make car-freedom possible. See what I mean below.

Two things became abundantly clear on car-free week: one, there are lots of unexpected benefits, and two, it’s not easy!

Let me tell you about the benefits first:

1. We ate out a lot less: Paul and I are notorious for eating out all the time, which you may have noticed if you follow me on Facebook or Twitter, with my daily Foursquare check-ins at a variety of local restaurants. Our normal routine is to go out to dinner after wrapping up the work day.

But without the use of a car, we became a lot more mindful of going out at night. Since I don’t even have lights on my bike, the only options left to us were to walk, take a bus, or walk to the Light Rail to get to a restaurant. This level of difficulty made is preferable to eat at home, especially since we live within a 10-minute walk to a grocery store.

So instead of hopping in the car to go to a restaurant, we found ourselves walking to Fresh & Easy instead to buy ingredients for that night’s dinner. 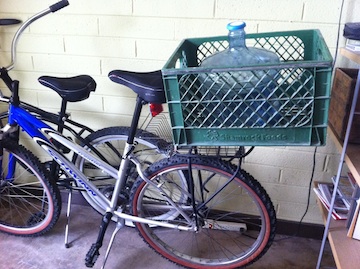 2. I got a lot more exercise: Even though I normally ride my bike all day even when we are car-lite, I always have a bail-out plan. If I am a little bit far from home, say I am in Downtown, and it is nearing the end of the day and I feel too tired to ride home, I call Paul to pick me up and toss my bike in the back of the car.

But during car-free week, this wasn’t an option. So I rode my bike back from where ever I was, even if I was tired. Also, since the sun has been setting earlier nowadays, there were a couple of occassions that it got dark before I made it home. As I don’t have any lights on my bike, I then found myself walking my bike home in the interest of safety.

Also due to my light situation and my inability to ride at night, I find that I walk a lot more in the evenings. Once Paul and I walked to Lux Coffeebar from our house to have a nice celebratory dinner. And just yesterday I walked to three different gas stations in search for my favorite chocolate bar, which I did not ultimately find, but I did get in a two-mile walk instead. 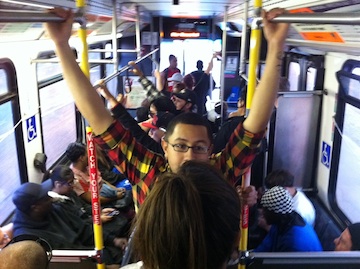 3. We saved some good mula! We estimated that we saved approximately $35 in gas during car-free week. But since Paul took the bus to and from work, and I occassionally took the Light Rail, we probably spent around $15 for transit, netting us a savings of $20. But the bigger financial impact was the fact that going car-free made us eat at home more. We estimate we saved about $60 in one week alone by dining at home. So it’s safe to say, we saved $80 last week because we didn’t use our car.

4. I connected with others more. I wanted to attend Greg Stanton’s election night party, but it was all the way in the warehouse district which seemed quite a distance during car-free week. The warehouse district is a little bit of a walk from the Light Rail, especially at night.

So I called on my community to see if someone would carpool with me, and my friend Chrissy Plante ended up giving me a ride. We also picked up my friend Doreen Pollack on the way so she didn’t have to deal with parking. Going car-free set up an opportunity for community support.

Another way car-freedom is better for connecting with others is because by walking and biking, I get a chance to make eye-contact and say hello to my fellow street users who aren’t in cars themselves. And of course, being on a bus or on a Light Rail car sets up all sorts of opportunities for propinquity as well. 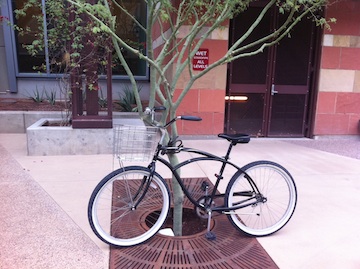 1. Lack of bike/ped infrastructure. It’s not easy to bike around the city mostly because of the lack of bike lanes and also the lack of bike parking. The reason it isn’t easy to walk in Phoenix is mostly because things are way too spread out to walk from destination to destination. I’m lucky to live in a neighborhood where I can easily walk to a grocery store, but in most places in Phoenix, this isn’t the case. 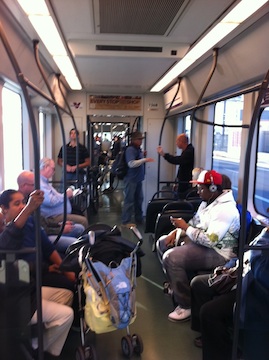 2. Lack of awareness. We are fortunate that there are lots and lots of community events that go on in Phoenix. But I found it hard to make many of them during car-free week because they were after dark (when I generally don’t ride my bike) and they were not near the Light Rail. We need our community event-planners arrange for transportation for car-free folks if their event is not near a transit stop!

3. Car-scale city. It’s not easy to be a cyclist, pedestrian or transit-user in a car-scale city. Things are too far apart, cars move too fast, and it feels too unsafe to navigate the city outside of a car.

This means that if you do make a commitment to go car-free you really have to plan out your life to make it work smoothly. You have to give yourself more time to get to work, to make meetings, to get to events, and even go grocery shopping.

And it also means that you have to be willing to sweat it out while you walk, cycle or take transit in the grueling heat of our summer. While we can’t do much about our climate, we can do something about our urban planning. We need more mixed-use zoning, neighborhood-embeddeness, and bike/ped connectivity and shade to give car-freedom a chance to get out of the freak exception category and get into the mainstream category in Phoenix.

Even though it’s not easy to go car-free in Phoenix, it was worthwhile for us to do so, not only as an urban experiment, but on a  personal level as well and so we have extended car-free week indefinitely. I’ll let you know how it goes, more to come on this series…stay tuned!

Don’t forget, tonight is the Travel Our Sustainable Corridors lecture about the canals, the second in the Sustainable Communities Lecture Series. It’s tonight at 6pm at the Public Market! Register here or pay at the door!

Tags: going car-free in Phoenix
« What I Learned from Living Without a Car for a Week in Phoenix: Part I  |  6 Things Cities Around the Country are Doing to Become Sustainable »