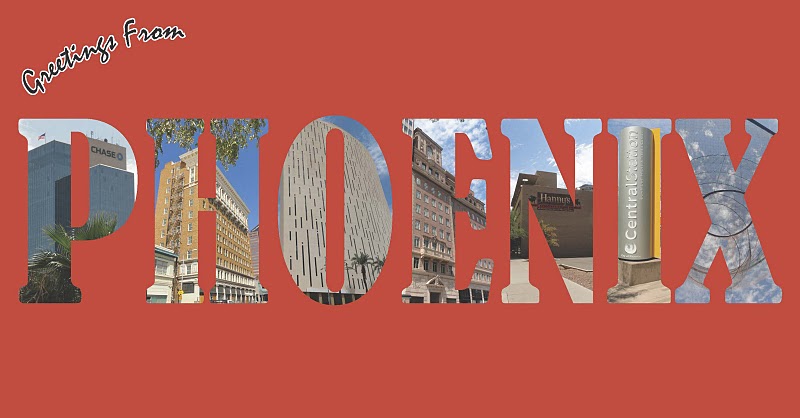 In August I wrote about “what is Phoenix’s landmark building”, and my questioning what it was that people would think of a snapshot-worthy sites in our fair city.

The response that you guys gave was fantastic and particularly thoughtful. From agreeing about the Security Building to lauding the Luhr’s tower and even trying to buy my friendship by complimenting my favorite topic, Metro Lightrail, I enjoyed reading all your comments so much, that I actually decided to do something about it.

Before I get there, though, do me a favor.  Go ahead and Google “Phoenix postcard” and take a look at the results. (I haven’t linked any directly because I’m not really sure who owns the image). The first or second one you get should say “Greetings from Phoenix” and look like it was drafted in the Leave it to Beaver era.  What have we got there, the Security Building with the Hotel San Carlos in the distance, Wrigley Mansion, the Capitol building, and oh yes, a cluster of Native Americans, a saguaro cactus with more arms than I’ve ever seen, and a whole bunch of palm trees.  Of course, there’s a cowboy thrown in at the bottom, just for good measure.

Now, I know that this may be the “iconic” image Phoenix was trading on back then, and I admit that it’s probably better to sell tourists on the idea of seeing cowboys than on the thriving Tuberculosis Retreat business we were doing, but still, it’s time we updated this bit.

It’s hard to fight, as much as that building flies “under the radar” in my mind, it is one of the few that I see and immediately identify as Phoenix.  If my childhood imagination hadn’t done it already (I used to think the windows were so narrow because they were arrow slits), I think the Jason Hill images mentioned in the comments forever etched this structure in my mind’s eye.  I’d have to say that the only thing which diminishes this building is the role it’s been stuck playing in the surrounding area.  Taller buildings across the street from it, a lack-luster rail stop nearby and nothing of note to the east make this guy seem like a foothill.

I have shared some of the same support for the jellyfish sculpture over Civic Space Park, but that’s mostly because I love public art, and thought it got a bad rap from folks who wouldn’t give it a chance. Then I heard a similar work was going into SFO airport, and whoa, that looks a lot like ours!  Why you gotta steal our thunder San Fran?

Actually, I suppose this is a possibility with any public art.  If the artist is successful and not particularly forced/inspired to deviate greatly, what you think of as a unique piece could end up looking like work in another city, and the whole experience is cheapened.  That’s not to say that I don’t think Echelman did a great job here, but with similar works in a dozen cities, isn’t this sort of a really flexible version of a Dale Chihuly?

As for the Chase Tower…. man, don’t we all wish the naming rights for this building weren’t tied to a banking enterprise? In comparison, we’d never imagine calling it the DaimlerChrysler Building (or the Fiat Building now).  A structure that commands as much of the vertical skyline as that surely should command it’s own name, too. 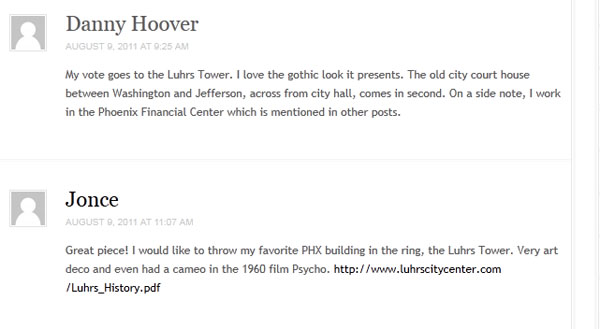 Now these buildings, the Luhrs Tower and the Luhrs Building, these ones really speak to my love for the urban aesthetic.  Not particularly new, and not exactly timeless, these structures still make me look up and check out all great lines, the materials, the symmetrical set-backs, the brown brick and cornice work…these seem like buildings with a story to tell.  As you can tell, I have trouble separating these two in my mind, and actually, I’m still not sure which of the buildings on that block is more relevant than the others, as even some of the smaller ones to the south seem packed full of character.

Swing and a Miss

Recently, we had an opportunity to do something that could really frame our future here in the city, and act as a statement that we really are looking toward a rich, urban experience over the next century, instead of a continued dedication to sprawl and build-it & forget-it styling.

The opportunity I’m talking about is the re-done Central Station for our bus & lightrail system, a shining example of short-sighted design and economics. Instead of building a grand structure that can make a statement about where/how we live today, we’ve got a bunch of gravel and a few new awnings.

Seriously, it’s Phoenix in the summer, with a 12 minute wait for the Light Rail and we can’t build our Central Station as an indoor platform? In other cities they have snow and other pervasive elements to deal with, and we can’t even figure out how to build proper shade taller than 12 feet?

Nestled between many of the great attractions mentioned above, and the appealing fascade of the Cronkite School, we had a chance to build something grand, something that was meant to last, and instead put up the architectural equivalent of a pop-up canopy.
I can only hope that in the coming years, we can no longer use the economy as an excuse and execute a plan for a real hub of transit and a stepping off point for welcoming folks to our urban environment.

Until then, here’s some super-cheesy tourist photos for you to chuckle at…