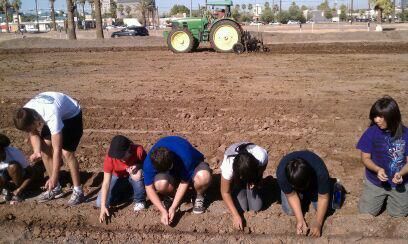 Valley of the Sunflowers – Enlivening an Empty Lot in Phoenix

It’s one thing to complain about the empty lots that plague our city, but it’s a very different thing to actually DO something about it. That’s why I’m so impressed by the A.R.T.S. (Adaptive Reuse of Temporary Space) initiative which aims to activate vacant lots. A.R.T.S. is a project that was spearheaded last April by the Roosevelt CDC and its visionary leaders Cindy Dach and Kenny Barrett.

The latest installation of A.R.T.S. is the Valley of the Sunflowers, a field of sunflowers on a 2-acre vacant lot in Downtown Phoenix. Not only will this field be startlingly beautiful in the middle of Downtown, it will also be harvested to make biofuel for the bio-diesel car being built by the Bioscience High School next door.

The Valley of the Sunflowers is more than just a story about a vacant lot. It’s a story about how great things can happen when a neighborhood goes from being just a group of houses and businesses to being a real community. The idea of planting a sunflower field came out of people working together, getting together and running into each other in the Roosevelt neighborhood. And the actual implementation of the idea also was made possible because of the community that came together and grew around this project.

The lot in question is owned by the City of Phoenix and the A.R.T.S. initiative approached them about leasing it. After some initial resistance, the City was convinced about the benefits of this idea and now they are one of its biggest advocates. They were generous enough to lease the land for free and to fast-track the project through the permitting process.

What made it easier for the City to come on board is that they didn’t have to front any money for this project. Due to the efforts of Sean Sweat, a Roosevelt neighborhood resident and community advocate who also happens to work for Intel, the Valley of the Sunflowers project was a recipient of some grant money that was distributed by the Intel corporation.

From individual neighborhood residents, the Roosevelt CDC, the City of Phoenix, the Bioscience High School and the Intel Corporation, various groups rallied around taking charge of the place where we live instead of leaving it to wither in the shadow of speculative development.

The A.R.T.S. initative is planning a third project, one that is still under wraps, but one that I’m sure will be extraordinary. With every project, the A.R.T.S. initiative is breaking new ground (no pun intended), forming new coalitions and opening formerly unresponsive hearts and minds to new possibilities for our city. They are showing us that we don’t have to stand for things like the empty lots that prevent our neighborhoods from thriving and that if we work together, we can create the city that we want.

Part of the A.R.T.S. initiative is to document each project to make sure that these experiments can be learned from, repeated, tweaked, and improved upon on other vacant lots by other groups of people. The intention is that temporary uses that activate empty lots will become a norm in Phoenix, creating an ever-changing tapestry of vibrancy and ultimately a new economic engine for our central core.