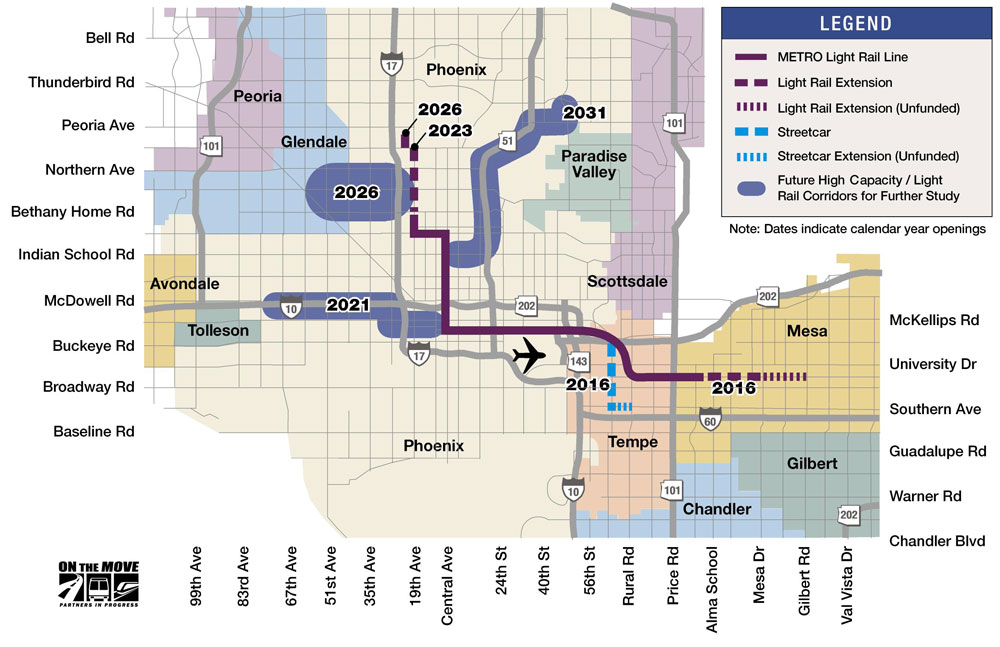 Today’s post is by Will Novak, a regular commentor on Blooming Rock full of good ideas and a deep knowledge of our city.  Even though Will has moved away, it seems his heart is still in Phoenix.  We hope to lure him back here some day as his vision for Phoenix is a great one.

Will Novak is an urbanist & Stand-up Comedian from Central Phoenix. He moved to Boston to chase his comedy dreams (and a girl). You can follow him on Twitter at @RealWillNovak, or watch video of him telling jokes at WillNovak.com.

With the success of the initial 20-mile Light Rail (LRT) line Valley Metro has wisely turned its eye to expanding the line into a full-fledged system. While all true urbanists are supporters of Light Rail and its expansion, some of the routes Valley Metro has chosen for future lines ought to be called into serious question.

The planned LRT extension in Mesa, the Northwest extension in Phoenix and Modern Streetcar line in Tempe all follow the same set up as the current line; running trains down arterial streets in separated right-of-ways. However, the first major westward expansion of the system (opening: 2021) randomly seems to abandon this successful formula for a plan that calls for running the majority of the LRT down the I-10 West. This plan is hugely short sighted and would be a major blow to urbanism, walkability and sustainability in the West Valley.

To understand why Valley Metro has fixated on the I-10 corridor for the Light Rail expansion, a bit of context is needed. When the I-10 West was built A.D.O.T. planners made the freeway wide enough for future mass transit use down the center median of the highway. Additionally, Metro planners feel they have a higher chance of receiving Federal Transportation dollars if they propose a plan with fewer stops and a higher average rate of speed. That line of thinking seems strange considering the rest of the upcoming extensions continue to operate on arterial streets and not freeways. Finally, one only needs to look at the study areas on Metro’s extension map (below) to see that their internal studies would land on a route along the I-10 corridor. The majority of Metro’s ‘study’ areas are so narrow that the ‘study’ is really only lip service to justify a predetermined route.

The question remains: is running Light Rail down the I-10 corridor the best plan for the Valley? Light Rail is a transportation solution that is something of a ‘middle way’ between modern streetcars and heavier and faster commuter rail. Light Rail isn’t suited or designed for moving huge amounts of riders over large distances, rather it’s more of a point-to-point service. Commuter Rail is used in most large cities to ease rush hour traffic for those traveling from the inner city business districts to the residential ‘burbs. Metro’s Light Rail trains travel at a maximum speed of 55 MPH (10 MPH slower than the speed limit on the I-10) whereas Commuter Rail travels at 75 MPH+.

Especially in Phoenix, it’s unwise to pursue a Light Rail system that has the primary function of moving people from the suburbs to downtown and back. Downtown Phoenix is a much smaller hub for employment than the Downtowns of most large cities. Employment is much more spread out in the Valley with multiple hubs; Downtown, Midtown, Biltmore, Scottsdale Airpark, etc.

A big part of the reason the current Light Rail line is a success is because it chains together a series of destinations that people want to go to, it doesn’t just go Downtown. The starter line connects a major shopping mall, two business districts (Downtown and Midtown), libraries, schools, arenas, stadiums, the airport and the major university. Future LRT extensions should continue to string together destinations people want to reach instead of focusing primarily on being a mover of Downtown office workers.

One of Light Rails greatest strengths, when operated down the middle of an arterial street (like the existing line), is that it helps create Transit Oriented Development. (T.O.D.). Even in a historically weak economy we’ve seen a fair amount of T.O.D. along the starter line in Phoenix and especially Tempe.

By placing the Light Rail line along the I-10 the possibility for millions of new dollars in T.O.D. is destroyed. Only “transit proximate development” would likely occur if the LRT followed the I-10 corridor plan. That is to say, while some new buildings would be built, they wouldn’t be urban in nature and certainly there won’t be any residential built. After all, do you want to live adjacent to a noisy, polluted, loud and hot freeway? Residential T.O.D. is what the Valley needs since it increases population density, which in turn helps promote walkability and sustainability. Furthermore, empty or underdeveloped lots adjacent to the I-10 where Metro plans to run the trains are few and far between, further limiting development opportunities.

So, if Metro’s LRT plan is redundant with the coming of Commuter Rail and will move slower than surrounding freeway traffic for large parts of the day, limits the possibility of T.O.D. and doesn’t string together major destinations, what would be a better route for the near West Valley? In my opinion the best solution for LRT in the West Valley is a corridor centered around Thomas Road.

The most sensible plan is to run LRT West on Jefferson from the current line, past the Capitol to 19th Ave. At 19th Avenue the line should turn north to Thomas Road at which point it would head west. The line would travel on Thomas Rd west for 7.5 miles before turning south at 79th Avenue and terminating at the Park and Ride at 79th Avenue and McDowell Rd (see map below). A future second phase could continue west on McDowell connecting Tolleson, Avondale, Litchfield Park and Goodyear to the rest of the Valley.

This route would successfully string together many established neighborhoods as well as attractive destinations. The neighborhoods of the Capitol Mall, Lower Grand, Roosevelt, F.Q. Story, Encanto, Maryvale and Desert Sky would all be linked and travel between them would become walkable. Major destinations like the State Fair Grounds (which attracts over one million visitors annually), the Coliseum, Encanto Park, Phoenix College, the Desert West Sports Complex, Desert Sky Mall & the Concert Pavilion would become easily accessible by LRT.

An alignment along Thomas Rd. would also connect the LRT line to Transit Centers, bus transfers as well as City Parks. The Transit Center near Desert Sky Mall (off Thomas Rd) is actually the busiest in the City (yes, even busier than Central Station) and that alone should be reason enough for Light Rail to connect there. The Thomas Rd. alignment would also run within a half mile (considered walking distance) of over 400 acres of City parks, Metro’s I-10 alignment runs near only 33 acres of parks.

The Thomas Road alignment would also help connect many Phoenix Union High Schools and reduce their transportation costs. Franklin Police & Fire High, Metro Tech H.S., Maryvale H.S., Trevor Browne H.S. and Bostrom H.S. would all be within the half-mile walking distance to the LRT line. The only current High School adjacent to Light Rail is Central H.S., where over 1,000 students daily use the Light Rail according to school officials. The Thomas Rd alignment would open up Light Rail usage to over 7,600 more High School students as well as the 12,000 students at Phoenix College. If only 20% of those students used the Rail (a conservative figure since over 50% use LRT at Central HS) that would result in about 4,000 new LRT riders per day.

Other than during the busiest rush hour, Valley Metro’s LRT alignment is unlikely to see much use. The idea that people will drive their cars to a Park and Ride and then travel on trains that are moving 10 to 20 MPH slower than freeway traffic (in addition to making stops) to attend a Downtown event is silly. However, the Thomas Road plan would allow residents along the current line to go to concerts at the Pavilion more easily, connect residents of the near West-side to the Fair Grounds, et cetera. Those living in the far West Valley (west of the 101) would eventually be able to use Commuter Rail to connect the Central Core.

All of this begs the question, what then should be done with the space on the I-10 set aside for transit use? One solution would be Bus Rapid Transit (BRT) as a bridge until Commuter Rail is in place. BRT travels in its own lane and is far less costly than any rail solution (though it also has lower capacity). If, once both LRT and Commuter Rail are up and running it turns out that the BRT is redundant, it could be removed in favor of additional traffic lanes and Metro could use the Buses elsewhere. That idea is probably too expensive for our conservative transportation planners though and the excess space on the I-10 could easily be paved and used for extra lanes, somewhat easing congestion.

Valley Metro’s plan to run the Light Rail extension down the I-10 will often move slower than surrounding traffic, it doesn’t connect neighborhoods or destinations, won’t spur much new development and would soon be redundant with the coming of Commuter Rail. Conversely running the Light Rail down Thomas Road connects schools and colleges, historic neighborhoods and developing suburbs, shopping destinations and concert venues and would help spur development in struggling areas like Maryvale. We’re never going to get a chance to invest billions of dollars in the near West-side again and for Valley Metro to so bullishly push for a LRT route that circumvents the City is foolish and short-sighted.

Finally, it is important to note that Valley Metro’s alignment is within walking distance to the huge Greenwood Memorial Lawn cemetery. So if the zombie apocalypse does come, at least the walking dead will have convenient access to public transportation.

If you agree that the I-10 West Light Rail plan is flawed please let the appropriate parties know your thoughts:

« Recent Articles  |  The Words and Forms of Paolo Soleri »