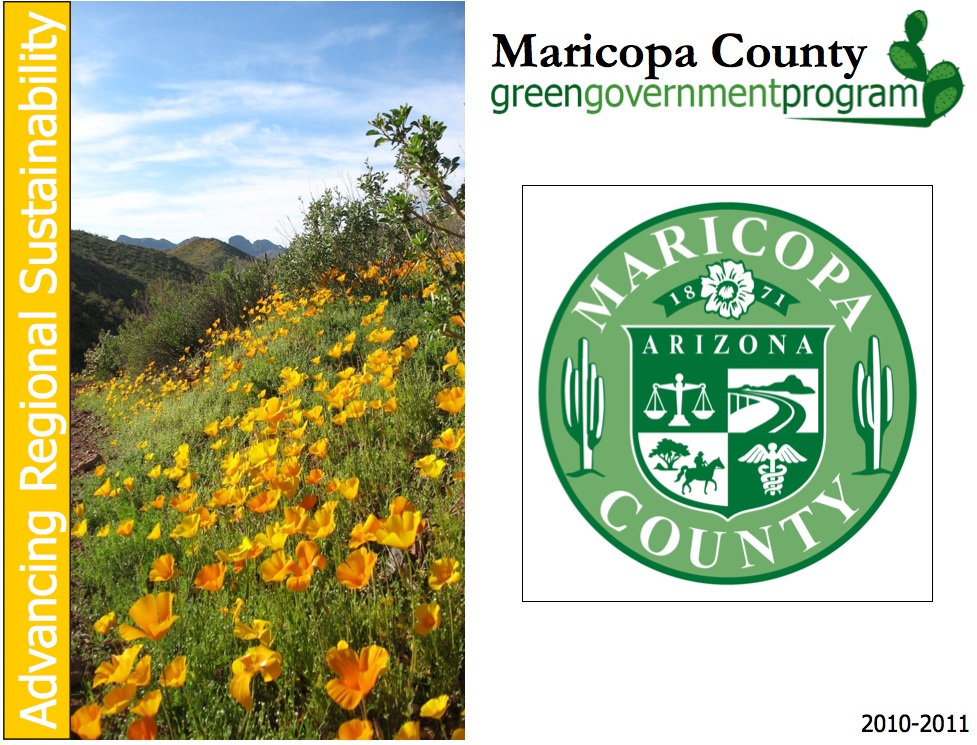 Tomorrow I’ll be posting part II of the interview that will cover coordination with other municipalities and internal departments, transportation initiatives and what other governments can learn from the County’s sustainability efforts.

Blooming Rock: What do you do as the Sustainability Manager at the County?

Jonce Walker: I write and manage sustainability policy internally for all the departments.  That takes up about half to three quarters of my time and then the rest of the time I spend working with outside groups like the US Green Building Council, Phoenix Green Chamber of Commerce, GPEC (Greater Phoenix Economic Council) and different external stakeholders who are interested in regional sustainability.  So my job is to advance regional sustainability.  That doesn’t necessarily end at any geographical boundary.  I work internally to write policy that makes sense from a triple bottom line standpoint not just from an environmental standpoint.  It has to make sense economically and socially (as well).

Blooming Rock: Can you tell me a little bit about the Green Government program?

Jonce Walker: The County is made up of a Board of Supervisors. There’s five of them and back in 2008, one of the Board of Supervisors, Chairman (Don) Stapley, wanted to advance green government and sustainability so I was charged to write the first document, I cowrote it with another colleague of mine.  And it was adopted in 2008 and that was version 1.  Just recently, in December of 2010, we adopted version 2.  We did a lot of research, even globally, and what we were finding was that a lot of plans that were similar to ours, were very vague.  They would say things like we’re going to add some hybrids to our fleet.  They wouldn’t say how many, they wouldn’t say by when.  So we wanted to NOT do that.  We wanted to be very measurement driven and that’s what we did.  We came up with a bunch of different measures for each department recognizing that every department does certain things.  Every department uses paper and every department drives.  So we wrote measures to speak to business (operations) and we also wrote measures to speak to what the service of the department is, as in what do they do for the public, and how do we make that more sustainable?  You have measures for animal care control that are not the same as measures for facilities management or public health.

So it (the Green Government Program) tries to do two things, but we think it works because everyone shares the common thread of business and then we try to get personal and ask, what does your department do?  We meet regularly with all these department leaders and we talk about the common threads, how we can help each other and how we can improve communication.  So far it’s going really successfully.  We’ve saved millions of dollars on energy, we’ve reduced trips, we’ve recycled tons and tons of material, and like I said, it’s the triple bottom line, not just environmental (benefits).  If something is a good idea but it doesn’t make sense economically, even with a five year return on investment, we probably won’t do it.  It has to make sense economically too.

Blooming Rock: Have you published the measurable benefits that have occurred since the program has been adopted?

Jonce Walker: We have a couple of snapshots.  I’ve been wanting to do that.  I think what you’re asking is, on each measure, have we added the savings as well the environmental and social benefits?  That will probably be in version 3.  I tried to do that for version 2, but it just got too big.  So right now what we’re showing is whether it (the measure) has been accomplished, if it’s ongoing, if it’s launched or if it’s not started.  The time lines will vary so some have already been accomplished, some are due in July of this year, some are due in July of next year, it just depends.  Measures that are due in 2015 most likely have not started yet, but most of them are launched or ongoing or are already accomplished.  But that’s a good point, I would love to do that.  Because at the end of the day I want to break it up by department and say this department saved this amount of money and these were the social and environmental benefits, and I also want to show collectively what the program has done.

Blooming Rock: You’ve been talking about the triple bottom line a lot, what are the specific ways that it drives the Green Government program?

Jonce Walker: With version 1, there was no filter.  So we went to all the departments and said, this is the vision/mission/scope, and we want you to submit your ideas and we’ll refine them.  We got a lot of different things.  Some departments were saying we’re going to reduce energy consumption by 5% and some were saying we’re going to switch out our light bulbs.  Both of them save energy, but one’s very broad and one’s very specific.  So, for the sake of letting these departments claim ownership, we went with it.  We said we’ll take everything, we’ll fine tune some stuff, but there was no filter.

What I did going into version 2 is what I call a “glance assessment”.  I didn’t want to overburden these departments with this work because they have another job to do so I just created a simple glance assessment and put in 6 questions on it.

1.  How will this measure impact residents of Maricopa County?

2.  How will it impact the employees of Maricopa County?  (so that’s the social aspect)

3.  How does it impact the regional environment?

4.  How will it collectively impact common space, i.e. air quality and land use. (that’s environmental)

(It’s about) getting them to think of things not just in terms of just the capital expense, but how it can also help these other aspects that have to do with sustainability.  Now there’s talk of a 4th tier of sustainability, the private sector has been talking about it, and it’s cultural vitality.  I haven’t yet really addressed that because I don’t want to overwhelm them (the departments).  But that’s what we’ve done to get these guys to think not only on a dollar basis, but also how these decisions can also help the two other sectors of what we really need to be thinking about anyway, which are the environmental and social (impacts).  Now when they develop a measure, they have to think about those 6 questions.  And that helps to filter out some stuff that doesn’t really make sense.

Blooming Rock: What are some of the things you’re doing to encourage sustainability in the community in addition to greening your operations?

Jonce Walker: We do a lot of neighborhood clean ups, one of the Supervisors, Fulton Brock, he’s very big on San Tan (Mountain Regional Park) cleanups and Mary Rose Wilcox is big on cleaning up Tres Rios (Wetlands).  Our Solid Waste department has 6 recycling locations throughout the County. If you live in unincorporated Maricopa County, if you don’t have curbside recycling service, it was always a problem of what do you do?  You had to go to the dump.  Solid Waste has been working very hard to take all kinds of recyclables even (things like) fluorescents, refrigerators and microwaves.  And we’re doing some pretty big solar projects that are in the works. Then there’s outreach, trying to get residents more educated about sustainability and trying to create a culture shift.

We’re also involved with ASU’s Sustainable Cities Network, which (comprises of) all the cities and towns plus some Native American communities and we meet regularly.  We share best management practices and ideas and “did this work for you and why not?”  So you get these cities working together with the County.  It’s good because the Cities go back to their residents and say Maricopa County’s doing this and so on.  We try to stay connected.  I go to speak at schools a lot and we have earth day events so as far as the community goes, we concentrate on outreach and education.

Stay tuned for part II of this interview to be published tomorrow!

Image credit: The title page of the version 2 of the Green Government Program.