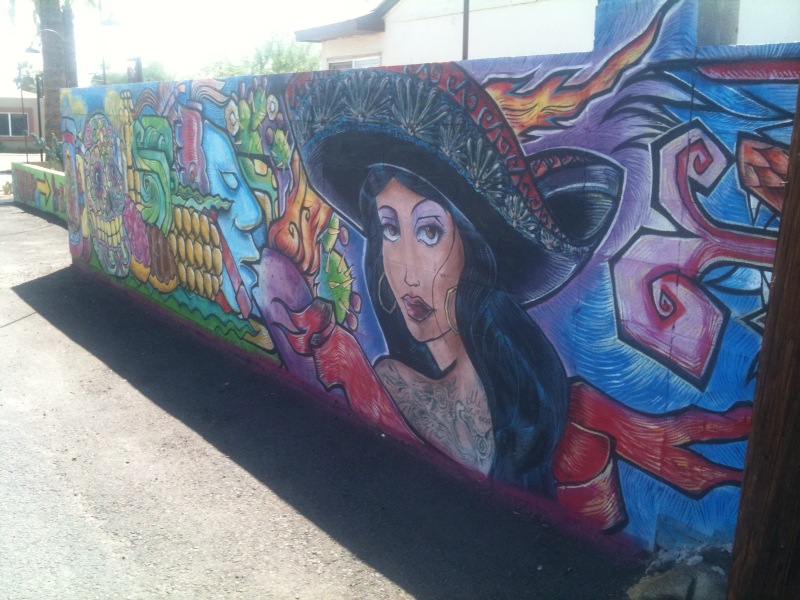 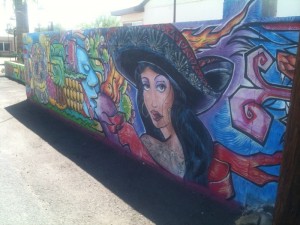 When I heard about the Calle 16 (Calle Diez Y Seis) project, I just about jumped out of my seat.  You may know that 16th St., aka Calle 16, is my street.  I live in the neighborhood, between Thomas and Osborn, just east of 16th, in the barrio!  Speaking of barrio, the tour de force behind Calle 16 is Silvana Salcido Esparza, the chef and owner of the fabulous Barrio Cafe.  The very presence of Barrio Cafe on 16th St., a highly-regarded restaurant in the Valley, has done wonders for the neighborhood.  Now Ms. Esparza is taking her contributions and involvement to a new level using art to create community and a sense of pride in the area.

I had a chance to talk with Ms. Esparza a few weeks ago about Calle 16.  Below is our conversation:

Blooming Rock: Could you tell me a little bit about what the Calle 16 project is about?

Silvana Salcido Esparza: It’s something I’ve had in my head for the last eight years since we (Barrio Cafe) have been here.  I always thought it was a crying shame that other cities have Little Tokyo, Chinatown, Greek Town, Polish communities and Little Italy.  And I’m not even talking about New York City or LA, I’m talking about other communities, for example in Detroit, there’s Mexican Village.  The name sucks, but the concept is there.  And here we have one of the largest Mexican communities in the country (and we don’t have a district). We’re complacent, we vacillate to become active.  I know I was one of them.  And with the whole SB 1070 stuff, I just got pissed off.

We finished a mural back here (at Barrio Cafe), and I was thinking, well what could I possibly do to celebrate the mural?  We started talking about doing a party, maybe we should do a fundraiser, maybe we should do a block party to raise funds.  What are we going to do with those funds?  Give them back to the community…and blah blah blah. The next day I woke up and it just hit me. Murals.  We’ll do murals.  We’ll create community through murals.

But the big picture of the Calle 16 is to designate an area as a cultural district, to identify the area as the heart of the Mexicano/Hispanic art community.  And what’s beautiful is that I just did it on Facebook.  We had 289 (fans) last night and today we have 350.  We have so many artists here, we have to get crackin’ and find some walls.  They key will be raising funds.

Blooming Rock: What do you imagine Calle 16 being, what’s your dream for it?

Silvana Salcido Esparza: The whole big big dream is to have (the district) from Thomas to Roosevelt. It could grow, but that’s the heart of it right there and to designate it.  We could have the city designate it and put up signs that say Calle 16 Arts, Cuisine, Cultural District.  Yeah, this is a little Mexico. It doesn’t have to say (that because) it’s going to encompass much more than that.  But it would give us a sense of pride.  Maybe do some street sculptures, change the dynamics and the face of it.  There’s so many buildings available right now.  (We need to) encourage people to come and open up businesses here.  It is a Hispanic community, there’s a lot of foot traffic, which makes it beautiful. 7th St. and 7th Ave. and 24th St., none of those major thoroughways have major foot traffic like 16th St.  This is a neighborhood street.  People live on that side, they live on this side (of the street).  They actually shop where they live.  And we just want to have a sense of pride.  Fortunately there’s a lot of people that agree with me so we’re going to get crackin’ and do something.

It was embarrassing with SB 1070, I mean here you have the eyes of the world, practically, looking at Arizona, especially Phoenix being what they were calling Ground Zero, and basically we had nothing to prove, no sense of community, no pride, nothing.  We’re all sporadic, we all have good intentions, we all have good thoughts, we all have good ideas.  But we need to bundle them and do something.

What are we going to do?  We have to be responsible for our own actions.  They can think however they want to think, but we have to be responsible for ourselves.  And it starts out with fixing up what you have.  I might be on the wrong side of the tracks for a restaurant, on the wrong street, but I’m still one of the top chefs in f*ckin’ Phoenix.  And how did I do that?  It’s because I cleaned up my sidewalks, I put my best foot forward, and I really don’t care what people think of me.  This is what it is and people can come and join in.  People come from all over.  And if they come to the Barrio (Café) from all over, why can’t they come to the street (Calle 16) from all over?

Imagine tourists coming in and intermingling with the foot traffic, with the residents, and shopping at the little shops.  It’s already started.  Next to the Barrio (Café) there’s a big empty 99 cent store.  And somebody I shared the vision with is already trying to negotiate a lease so they can open up a store there to sell furniture, art, and things of that nature.  That’s what we want to do.  We want to put our best foot forward and encourage our fellow residents of the 16th Street area to create a community.

Blooming Rock: Why was it important for you to locate Barrio Cafe on 16th St.?

Silvana Salcido Esparza: That was a no brainer.  First of all, I used to eat here when it was Tony Marie’s for years.  It had good energy.  I believe in karma.  It had really good energy, it wasn’t on a strip mall and I had no money.  I wanted to open up a restaurant and I had no money.  It was just (a matter of) the right place at the right time.  I never thought, ‘I’m going to open up a restaurant and call it Barrio.’  No.  I secured the lease and when I started to pull the windows back to clean them, to start construction, I looked out and I saw hookers in the front and drunks in the back.  And I knew, ‘oh, we’re so in the barrio’.  And I saw the paletero over here and the balloon vendor over there and the lady knocking on the window trying to sell me tamales, and I went, ‘oh this is so called the Barrio Café’.  Then that was it, it was that fast, that easy.  I think it chose me.

Blooming Rock: Can you tell me a little bit about how the idea of Calle 16 is an answer to SB 1070?

Silvana Salcido Esparza: It’s a positive answer.  The message we’re going to convey is, paint whatever you want.  We cannot tell you what to paint as an artist.  However, remember this, we’re putting our best foot forward.  So the message we’re sending is one of recovery, one of peace, one of love, one of unity, one of reaching over and loving everybody, even when they don’t love us.

It is a message of those who have gone before us, from Gandhi to Mother Teresa, to Dolores Huerta,.  Everybody needs to take a mirror, look into that mirror and say what am I doing, what can I do to better myself and what am I doing for my community?  Because voting is not enough.  Sticking my hands in my pocket and giving my max contributions to the politicians of my party, that’s not enough.  So what can I do, how can I roll up my sleeves and do something?  That is the vision I got and that’s the vision I’m going to go with.  Fortunately, there’s quite a few people who share that vision.  It takes a village.

Blooming Rock: I see that you have beautiful art everywhere.  Why do you think murals are important, how do think art creates community?

Silvana Salcido Esparza: It just does.  I know what I know. I spent a lot of time in Mexico and one of the things I always did were the churches, the mercados, and the pyramids.  When you climb up that pyramid, and you’re able to go up in Palenque, and look at what the Mayans did, and it’s still there.  It just captures your heart and it’s something that goes into your memory and you don’t forget.  It’s part of our culture.  They used food to paint those murals, like in northern Mexico, they use nopales.

In the same fashion, the other masters, Rufino Tamayo, Diego Rivera, they painted in the same fashion with a modern take.  And it always has been a voice.  Think about the Mexican Revolution, and the post-Revolution and all the murals that came out of it. Think about SB 1070, that is our revolution here today and the murals that’ll come out of it, we’ll have to see what message they’re conveying.  But this is not just a bunch of Mexicano artists, this is about community artists, they’re all coming together.  From Los Angeles today I just got word that George Yepes is going to collaborate with Gennaro Garcia, he’s world-class.  He is a muralist, he has a school for muralists in Los Angeles, and he’s going to come and paint with Gennaro Garcia on a mural. And as a project, that’s going to be our first mural. I don’t care if I have to dig in my own pocket to pay for this mural, it will happen.  Kind of like if you build it, will  they come.  Do you have the idea and go out and ask for permission?  Do you hope you can get some money?  No.  I’m going to dig in my pockets, ask others to do the same thing, and we’re going to start doing it disorganized.  You don’t need to get all your ducks in a row to get into action.  You just roll up your sleeves and do it.  It is easier to ask for forgiveness than for permission.

When I opened the Barrio Café, I had no money. I had been traveling in Mexico for almost three years. I had no money when I got here.  I wasn’t worried about it.  That happens.  When it’s meant to be, it happens.  The heart of the community is ready to go.  We’re all angry, we’re all frustrated, and it’s not over.  It’s far from over.  We’re in the middle of it.  The press, the media, eyes will be on us (the Latino community) especially in 2 years when we have the major elections going on again, we’re a hot topic.  We’re going to be back, but this time, we’ll have some walls.  We’ll have a sense of community and pride.

There will be a Calle 16 Mural Project Kick off & Silent AND live Art Auction on October 11, 7-9pm at Barrio Cafe.  Please come out and support this fantastic community project!  You can RSVP here.

Photo Credit:  The mural behind Barrio Cafe.  Photo by the author.