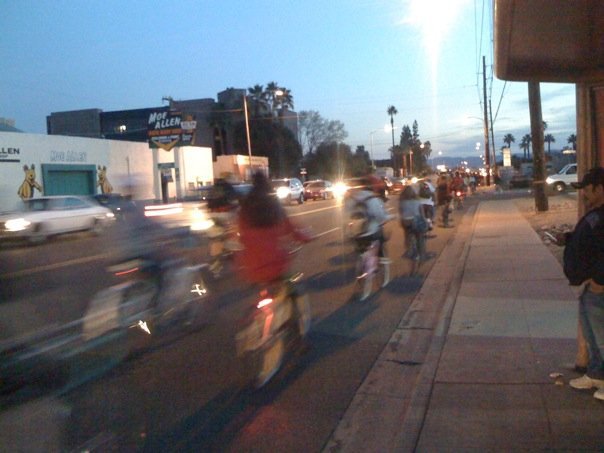 Critical Mass Phoenix Makes Room for Bikes on the Street

When I asked Mayor Phil Gordon at a community breakfast a year ago about the lack of bike lanes in Phoenix, he told me bikers should use the canals.  Really Mayor?  That’s your answer to why we have almost no infrastructure in place for bikes in this city?  What if bikers want to use the roads, like everyone else?  What if the canals don’t take people where they need to go?

Biking has been flagrantly dismissed as a viable mode of transportation by our city ever since its modernization.  Finally there’s an event in town that takes a stand against this dismissal, that gives voice to the struggling city cyclists of Phoenix and coalesces them into a group that says: we’re here to stay and we demand your acknowledgment!

This event is Critical Mass Phoenix and it’s held on the last Friday of every month, rain or shine, sweltering or cool, starting at Steele Indian School Park at 6 or 7pm.  Critical Mass is a world-wide event held in hundreds of cities.  The first Critical Mass bike ride was held in San Francisco in September of 1992.  The event happens in each city on the last Friday of every month in the evening, creating a deeper sense of connection to the rest of the world, at least once you realize that people all over the planet are riding their bikes in support of cycling in their city.

1.  There aren’t sufficient bike lanes in our city.  And in the streets that do have them, few are contiguous.  Most bike lanes stop a few yards in front of an intersection and start up some yards after.  This makes for unclear, unmarked territory for bikes, thereby increasing the chances for accidents around intersections.

But those are the few streets that even have bike lanes.  Most major streets in Phoenix DO NOT have one.  This is the city’s way of saying to bikers: you don’t exist, get a car, and then we’ll talk.  A few brave cyclists still ride on the streets alongside cars, even when there is no bike lane, but I fear for their safety.  For the most part, I ride on the sidewalks.  Sadly, even the sidewalks are a poor haven for bikers, because even sidewalks end abruptly at times, and at others, were never put in in the first place.

2.  Most drivers are unaware of bikes, they don’t stop at intersections to look for them, usually rolling around the corner, looking for oncoming traffic to the left, completely unaware of bikers or pedestrians just inches from them to their right.  This is a symptom of the fact that bikes are essentially not wanted on the streets, as established by point no. 1, so people aren’t used to sharing the road with them.

3.  There are pitifully few bike racks around town, both a symptom and a cause of low bike ridership.

As you can see, there are some basic amenities for bikers that are conspicuously missing on our streets, and that’s probably the number one reason to come out and participate in Critical Mass Phoenix.  Another is that it’s a great way to get together with other people, to spend a couple of hours with them, out on the open road.  The group looks out for each other’s safety, comes together to form an entity making its way through the city, negotiating with traffic lights, waiving to people on the patios of restaurants and bars and gladly receiving the honks of supportive drivers.  For a city biker who usually feels like an exposed slow-moving speck in a world of fast-moving giants, this event is a place where she can feel as if she’s not alone, as if she belongs on the streets as much as cars do.

So if you’re a frustrated cyclist in Phoenix, or you know of one and you sympathize with her, please come out and join the Mass in support of biking on the streets of Phoenix.  You can find details about the next event here.