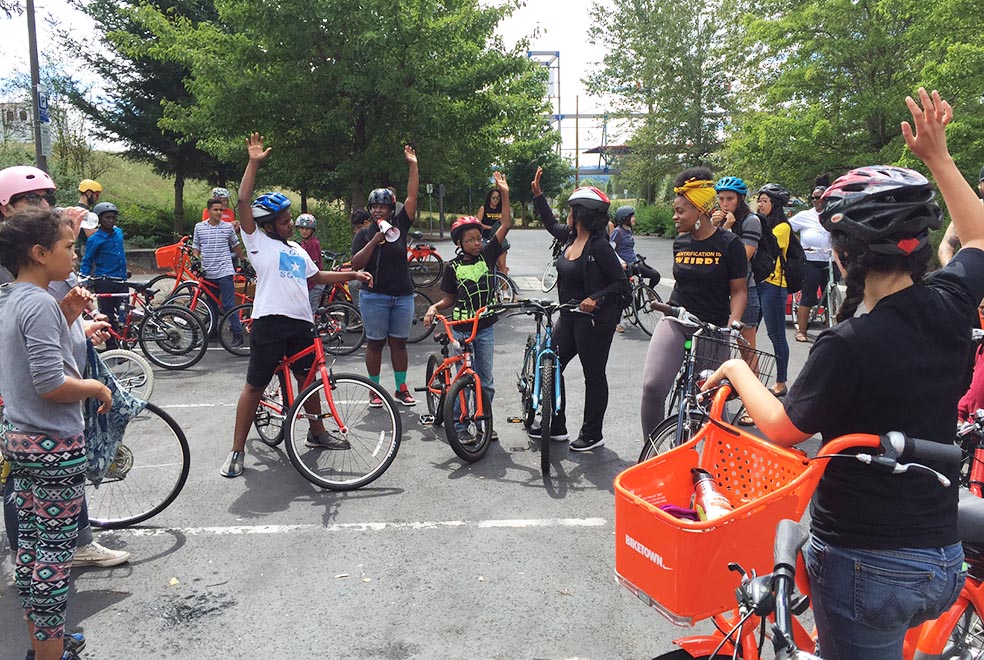 A Letter to the People of Color in Portland

Dear people of color in Portland,

When I moved here in 2013 I did notice how white it was but I didn’t mind it too much. All of the other things that I loved about Portland overshadowed this. I loved being able to be car free, I loved being surrounded by people who are committed to environmental responsibility, and I loved the anti-establishment culture. I was coming from Phoenix, Arizona, where all of this was a huge breath of fresh air.

A few years into my stay in Portland, the lack of people of color in my world started to wear me down. I was a part of the biking community and the urban planning community and both are very white. I noticed that I was often the only person of color in my professional and social circles and it started to gnaw at me. In those circles I either felt like like an outsider or like I had to morph myself and my preferences to accommodate white culture so I could fit in. For example, I often hid that I don’t drink, cause drinking is a big part of the biking community in Portland. And though I’m politically progressive, things like smoking pot everyday, polyamourous relationships, and even something as ubiquitous as camping are foreign to my cultural background of being an Indian Muslim.

This past year, I came to feel isolated and lonely because an important part of me – my non-white identity – had atrophied because of my experience in Portland and this made me ache. I had connected with a couple of urban South Asian groups, which felt like water that slaked my thirst, but we seldom got together. Other than that, I had cultivated a very white community in my everyday life. Most of my Facebook friends were white, friends I hung out with were white, the professional and social communities I was a part of were white, and all of this in the whitest city in America.

I felt alone, especially when I raised the issue of race. My white friends, no matter how well-intentioned, just weren’t able to empathize with my POC experience of living in overwhelmingly white spaces. Whenever I spoke of my struggles in this arena, my white friends often shut down or shut the conversation down because they thought I was attacking them personally and because it threatened the rosie picture of their progressive city. So the much needed conversation went nowhere and I felt ever more stymied and alone.

I continued to try to abate my loneliness by trying to convince white people that Portland has a very big race problem. I even wrote an article on BikePortland about adding more diversity to group bike events, because currently the biking culture in Portland is extremely white. It felt good to write this article and to include the voices of people of color in it, but I wonder if it even made a dent in the mindset of the mostly white bicycling community. Convincing white people in Portland that there is a race problem in this city turns out to be a big monster to slay, much less convincing them to be more inclusive.

So I started to make a concerted effort to connect with communities of color. The first thing I did was attend my friend Amy Keo’s event, Radical Meditation for People of Color, in North Portland. It was the first time I had been around so many people of color in Portland. The meeting happened shortly after the Orlando shooting earlier this year and everyone in the room was hurting because of it. We went around the circle of attendies and spoke about what our struggles and experiences have been as people of color. And for the first time I felt completely seen and heard. No one tried to shut down my conversation about race. In fact, it was sought out and heard and empathized with. It was an empowering experience.

Along my journey to connect with other people of color in Portland, I joined the Environmental Professionals of Color. I joined Facebook groups of communities of color. I went on the Gentrification is Weird ride, which was organized by Laquida Landford, Donovan Smith and his clothing brand Ignorant/Reflections and the Community Cycling Center. I attended the Invisible Spectrum Storytelling, Stories of People of Color in the Whitest City in America event put on by Elina Lim. And I registered for the Portland Underground Graduate School’s class Navigating White Spaces as a Person of Color taught by Sam Baraso and Taylor Steele.

All of this helped me understand that the struggle of people of color in this city is real. And that to survive and thrive in this city as a person of color, it is extremely important to connect with other people of color. This is the only way that Portland will become more diverse and inclusive, when communites of color organize collectively to make a change.

I became so empowered by connecting with communities of color that I organized two bicycle rides I’m proud of – the Immigration Ride and the Cycling Against Hate Ride, which was inspired by a hate crime against a couple of black children in northeast Portland. My intention was to inject diversity, inclusion and equity in an otherwise white Portland institution – group bike rides.

I know I’ve only scratched the surface of connecting with the POC voice in Portland. But it’s been enough to let me know that the struggle as a POC in a very white city is real, not imagined. In the POC community, I found people who look like me and who experience the same struggles as me. They understood what I was saying, validated it and supported me. They made room for my voice and my full identity in ways I wasn’t able to find with my all-white circles in Portland. The POC community in Portland may be small, but it is strong!

Unfortunately, when you are a person of color in inner Portland, you can’t just live your life and be expected to be connected to other people of color. You have to put some work into it. You have to actively seek out and connect with communities of color. Here are a few resources for POC who are into the things Portland is known and loved for, like environmentalism, sustainable food, the creative culture, and bicycling :

Radical Meditation for People of Color

Contact me directly at bloomingrock@gmail.com for a safe space to connect with people of color that does not want to be listed publicly.

My experience in Portland catalyzed my own personal journey with reclaiming my Indian/African heritage and making it a loud and proud part of who I am. And it showed me how important multiculturalism and diversity is in my everyday life. This is a big part of why I am moving away from Portland to live in San Francisco.