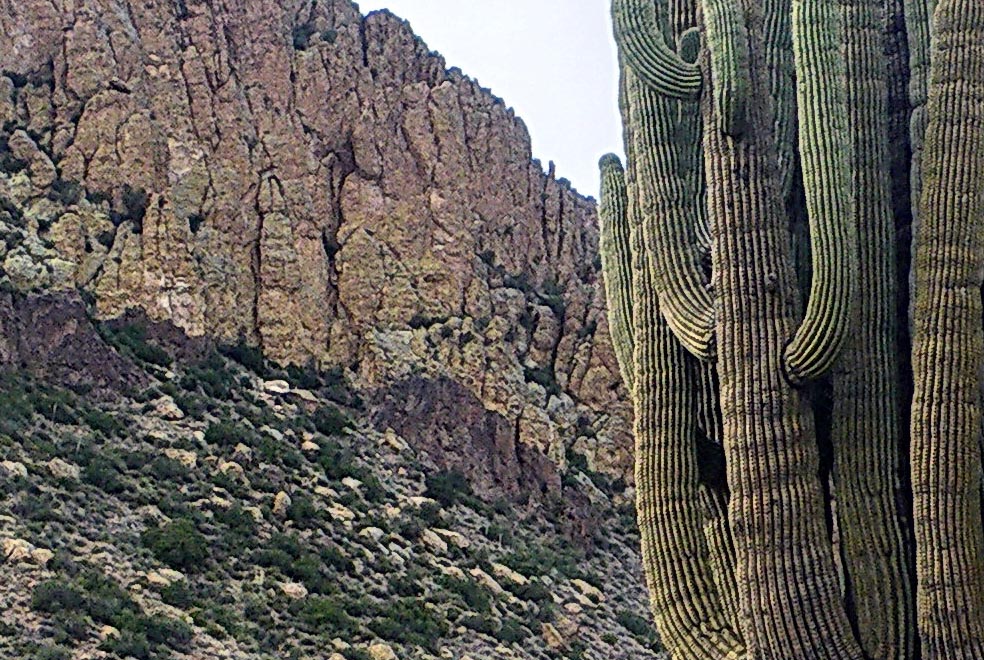 Today’s article is by guest contributor Jonce Walker. Jonce is a LEED Accredited Professional, a Certified Sustainable Building Advisor and a Sustainability Consultant for Terrapin Bright Green in NYC.

In the 1950’s, the arid climate of Phoenix, AZ created a haven to recover from the respiratory challenges associated with colder, wetter places in the United States. Coupled with warm winters and the chance to retire in inexpensive housing, the Valley of the Sun became a powerful draw for many Americans starting new lives after the war. However, after 60 years of breakneck development, several climate change-related challenges are beginning to emerge and threaten the survivability of the city.

There are numerous climate change-vulnerable areas in the U.S., but some of the most fragile ones include the cities of the arid southwest desert that have been developed with a manifest destiny ethic, turning a blind eye to geographical context. Unfortunately, this lack of regional mindfulness has begun to work against the resiliency of these cities as climate change tightens its grip.

Phoenix boasts thousands of miles of asphalt, several residential water-ski lake communities, and enough sprawl to fit Manhattan, San Francisco, Paris, and Rome combined inside its boundaries with room to spare. As a place named after the mythological bird that rises from the ashes of its predecessor, Phoenix’s infrastructure is anything but regenerative. Cheap land and development-friendly regulations have enabled this part of the Sonoran Desert to transform from pristine wilderness into a city of subdivisions. The livability challenges of Phoenix are beginning to multiply as climate change presses in. Pervasive urban heat island, poor stormwater management and lousy air quality are a few of the current problems in need of swift correction.

“The photosynthetic veneer, the vegetal world, must not be overlaid by a man-caused opaque veneer.” – Paolo Soleri

No longer a place for people seeking respiratory health improvements, the Phoenix area has grappled with serious air quality problems since the 1980’s. Air-borne particulates, low level ozone and thousand foot tall dust storms called “haboobs” have created year round poor air quality. Previously considered rare events, haboobs are becoming increasingly frequent due to prolonged excessive heat compounded by the effects of climate change. Tiny particles of dust are becoming so common in the air that research is finding an increase in asthma attacks and symptoms in children and increased asthma related hospital visits.

It’s no mystery that the desert gets hot, but the increased likelihood of 110+ degree summer days in Phoenix is becoming a concerning trend. Between June and October a possibility exists that temperatures will peak between 114 and 122 degrees. On June 26, 1990 Phoenix experienced a day with the mercury topping at 122 degrees Fahrenheit, grounding planes at Phoenix Sky Harbor and killing three people. 2013 was the hottest summer on record for Phoenix since the U.S. record-keeping began in 1895, with an average daily temperature of 95.1 degrees. This trend proves that climate change mixed with the urban heat island will continue to exacerbate this dilemma.

Another climate change-related issue is the increasing severity of rainstorms. The 2014 Phoenix monsoon season has been record breaking, shattering the previous single-day rainfall record set in 1939 of 2.91 inches. The National Weather Service recorded 3.29 inches of rain on September 8, 2014, by far the most precipitation ever received in one day in the city, closing freeways and inundating homes. Rainfall is good for the desert if it has the ability to penetrate the soil, but in cities like Phoenix, the urban landscape has become impermeable. The construction of roads, parking lots, and buildings have created a landscape prone to expensive and dangerous flooding. Climate change-related storms will become more frequent and unpredictable, and without an effective design strategy to handle this, Phoenix will continue to suffer dangerous and costly damages. 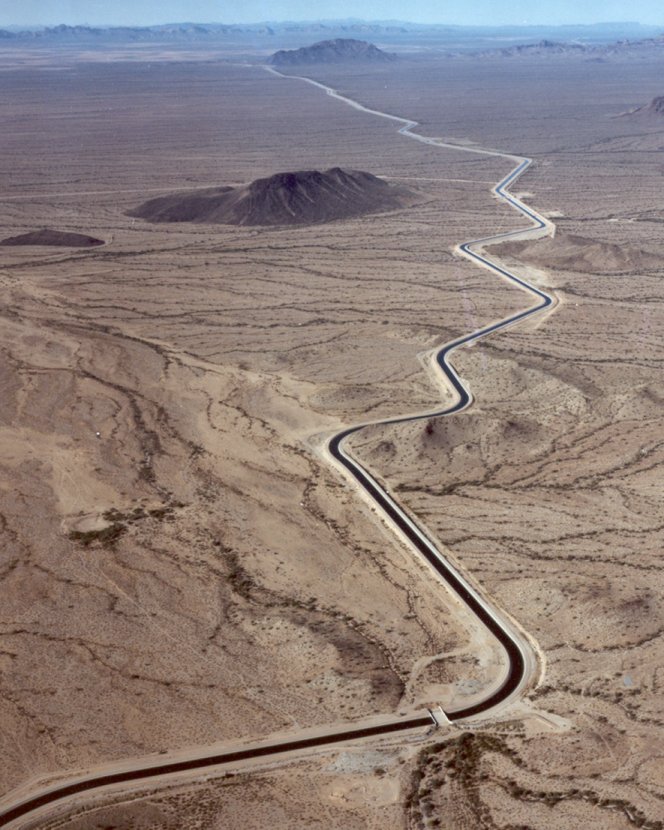 In order to build a place in the desert you must create an oasis. Water is the essential ingredient to building a city in the desert and Phoenix is no exception. The Central Arizona Project, a 300 mile open air water conveyance channel connecting the Colorado river to Arizona communities, is the most expensive Bureau of Reclamation project in existence and is one example of the human will to move water around to create a place in the desert. Phoenix’s heavy reliance on this fragile, constructed waterway is another unsustainable strategy for grappling with the increasingly dry and severe climate.

Phoenicians understand the importance of water,  but many aren’t aware of its nexus with energy. The largest generation of power in Arizona, nuclear energy, is a thirsty endeavor.  When a nuclear generating station is built in the middle of the desert, you have to find a way to import water to keep the system functioning. The 3.3 GW Palo Verde nuclear generating station, the largest in the United States, consumes more than 20 billion gallons of water each year, requiring an agreement with neighboring cities to send water effluent from sinks, washing machines, and toilets to cool the towers. Unfortunately, this undermines the very water conservation ethic that is needed for a large desert city to survive, because in order to keep the generating station running, waste water must be created. During a water shortage, waste water decreases, threatening to shut down power generation. The system was designed to rely on inputs that may be compromised if extreme drought becomes more pervasive and climate change impacts increase.

Looking to Nature for Solutions 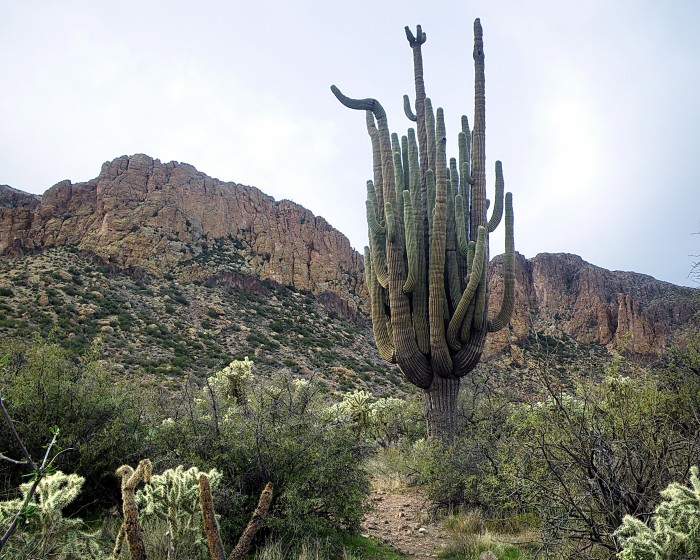 Phoenix exists in one of the most biologically diverse places in the world, the Sonoran Desert. Rather than plowing it under to make way for development, Phoenix could look to the desert for biomimetic clues on how to design like nature does. The Sonoran Desert is teeming with life that has evolved to thrive in one of the harshest environments on the planet. Take the iconic saguaro cactus for example: a dynamic plant that stores water during the rainy season to be used year round and has spines to shade its surface. Phoenix could apply these design principles to buildings — integrating water storage and smart shading systems.

Another strategy that Phoenix could utilize now to help prepare for future climate change impacts is to apply ecosystem services strategies to enhance/protect existing sites before development. The development of a rating system merging the fields of sustainable design, environmental planning and restoration ecology would be able to determine how the existing natural system functions on the site. Planners, designers, and regulatory agencies in Phoenix could apply this tool to understand the ecological value of a site and then work to enhance it.

Phoenix has imported architecture and design strategies from all over the United States instead of developing its own desert-responsive design. Implementing design regulations that persuade developers to work in harmony with nature instead of attempting to defeat it would be a very impactful resiliency strategy. Building orientation that shades a space in the summer but lets in the lower winter sun to warm the space is just one example.

Trying to sustain over two dozen cities spread across 2,400 square miles of unforgiving desert is hard work. Let’s hope there is time to make the overdue corrections before a large climate change event like Hurricane Katrina’s deadly inundation of New Orleans or Superstorm Sandy’s blackout punch to NYC occurs. There has been some action, albeit slow. The last few years have brought improvements in transit, small gains in energy efficiency and solar integration, and a Mayor that understands the importance of sustainability. But real change requires a comprehensive shift in mindset: away from short-term solutions and toward strategies derived from the natural systems that have thrived in this challenging environment for thousands of years. This coupled with swift action is a necessity: the survivability of Phoenix depends on it.