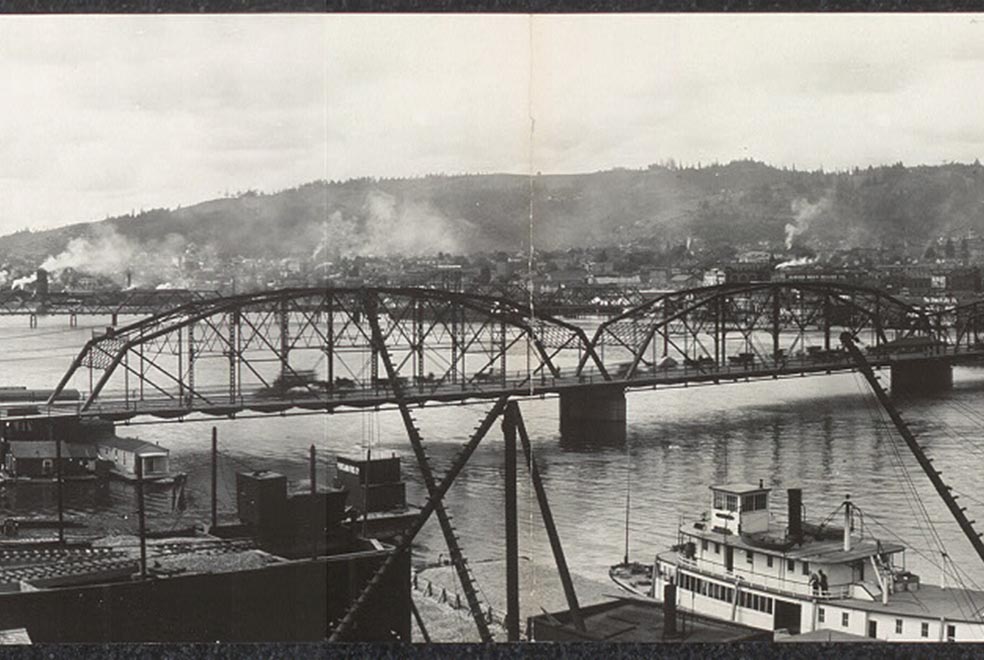 On this Independence Day, let’s take a look at the early days of Portland, how it got settled and how it consolidated three small cities into one large one to compete with arch nemesis Seattle.

In 1880, Portland was still a small railroad town with only 17,000 residents on the west side of the Willamette and a few hundred more scattered on the east side. It was more of a country town than a bustling city. The population was a mix of Europeans and Chinese. But by the turn of the 20th century, Portland made a place for itself on the Pacific Northwest map and became a metropolis thanks to transcontinental railroad links, the construction of the bridges, streetcars and real estate development.

Nothing changed the face of Portland like the construction of the bridges. The Morrisson Bridge was the first, built in 1887, and it paved the way for the wider settlement of East Portland. The Steel Bridge came later in 1888, the Madison Bridge was constructed next in 1891 and the Burnside Bridge came about in 1894. These bridges replaced the Stark Street and Albina ferries. But the Sellwood ferry continued to operate long after the construction of the bridges.

Between 1885 and 1895 the city council granted dozens of franchises allowing private companies to build and operate street railways on public rights-of-way. Small steam engines on the first east side line on Hawthorne Boulevard took passengers across the Morrison Bridge to the new neighborhoods of Sunnyside and Mount Tabor. The first electrified trolley crossed the Steel Bridge to Williams Avenue in 1889. By 1990, 128 miles of trolley track ran throughout the west and east sides of the Willamette. Streetcar service was especially good from the Steel Bridge along Albina, Williams, and Martin Luther King Jr. Boulevard (then called Union) and east from the other bridges along Glisan, Belmont, Hawthorne, Clinton and Gladstone. On the west side, where trolleys has a difficult time along the steep slopes, a cable car ran up an inclined plane that rose southward from Jefferson Street to Portland Heights in 1889.

East Portland and Albina were originally their own towns separate from Portland proper on the west side of the river. They began as secondary industrial centers built around docks, sawmills, flour mills, and railroad yards. East Portland was incorporated in 1870 and stretched from present day Northeast Halsey to Southeast Holgate. Albina was incorporated in 1887 and was run by the Oregon Railroad and Navigation Company, whose riverfront shops had hundreds of workers.

The east side boom erupted with the construction of the Morrison Bridge. Thanks to the easier transportation to and from the city, speculators began laying out middle-class subdivisions on higher land further away from the dirty and rowdy Willamette. The Irvington neighborhood emerged in 1887; Sunnyside and Central Albina came about in 1888; and Woodlawn, Kenilworth, Woodstock and Tabor Heights date back to 1889. In the 1890s, the boom continued and Ladd’s Addition, Brooklyn, Richmond, Arbor Lodge, University Park, and Piedmont were added.

Sellwood was a “steamboat suburb” before the streetcar arrived. The community had 500 residents in 1885 served by a ferry across the Willamette and by steam launch service into the city. The addition of the streetcars in 1892 helped the population boom to 1,800 by the next year, when Sellwood was annexed into Portland. Many of these neighborhoods were segregated and had deed restrictions against African Americans and Asians. These deed restrictions were under effect until the US Supreme Court declared them unenforceable, but even well after that, real estate professionals continued discriminatory redlining practices.

The Unification of Portland

The consolidation of Portland, East Portland and Albina was brought about by the railroad. An 1890 census reported a disappointing population total for the west side city. Worried that Seattle may surpass them in population, the Portland Chamber of Commerce began to push for a merger with East Portland and Albina. East-siders would benefit from the removal of bridge and ferry tolls, while businessmen would be able to impress outside investors with a higher population count. Consolidation was passed easily in all three cities in a general referendum in 1891, instantly boosting the size of the city and keeping it well ahead of Seattle and Tacoma into the 20th century.

The land area within Portland city limits jumped from 7 square miles to 26, and 10,000 East Portlanders and more than 5,000 Albinians were added to the population count. Two years later the city grew another 50 percent in size by annexing chunks of the southwest hills, Sellwood and the subdivisions east of 24th Avenue. In 1880, when the east side had only 3,000 residents, it had been a neglected and scruffy fringe. Twenty years later, the east side boasted of 32,000 residents and became an essential part of the city.

[Source: Carl Abbott’s book, Portland in Three Centuries: The Place and the People

Tags: albina, east portland, history, portland, portland history
« My 10 Favorite Things to See and Do When I Visit Phoenix  |  Property vs. Place »