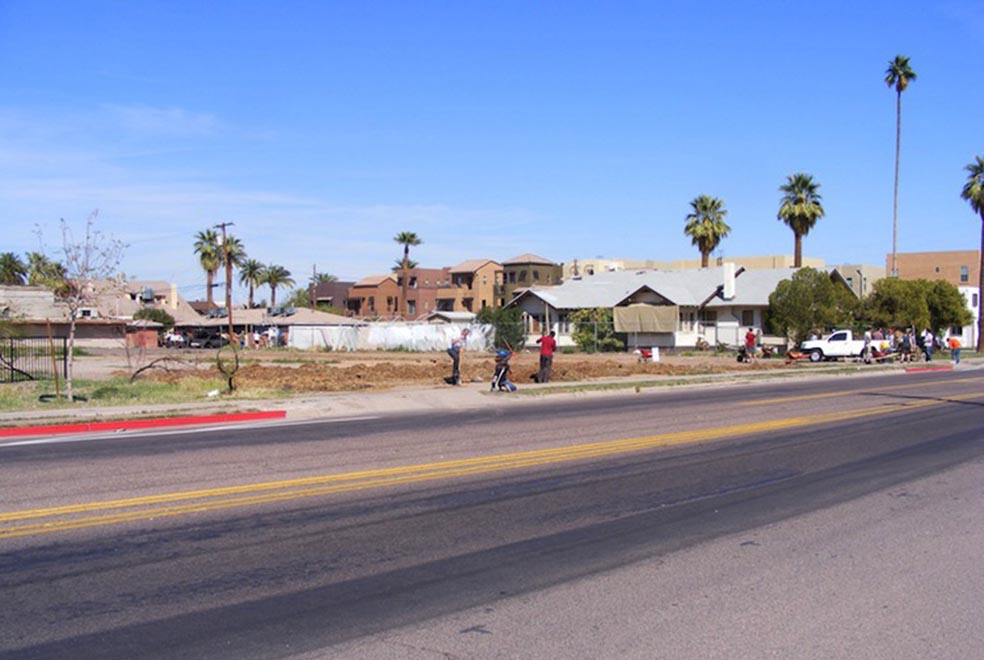 To simplify infill development process, the City of Phoenix reaches out in ‘listening sessions’

Members of the City of Phoenix Planning and Development Department informally met with local developers in the AE England Building in downtown Phoenix Tuesday afternoon to get a feel for what those on the other side of city code think about current regulations and procedures.

Cynthia Stotler, the assistant director of the department, opened the floor of the historic building’s spacious event room to the audience for a “listening session.” She said that in response to growing demand for a more livable urban environment in Phoenix, the City wants to ask different groups of stakeholders where  changes can be made to better encourage infill development. The event was one of several meetings being held this week.

At this meeting, infill development was understood to refer to the use of land within city boundaries that is currently not being used, but has the potential to be. Infill development may encompass development practices such as adaptive reuse and historic preservation in addition to building new developments. Comments, anecdotes and suggestions shared by audience members were recorded by department member Darcy Kober, who is also accepting email messages from those wanting to voice their opinion.

Stotler and audience members discussed how “suburban” building practices such as having high minimum setbacks and high minimum parking requirements for developments were not conducive to creating more urban spaces, especially downtown. According to the audience, interpretation of city code needs to pay more attention to the greater goals of mixed-use and transit-oriented development when updating code or granting relief on a site-by-site basis because these can be frustrated by current parking rules and building ordinances. The mostly unspoken value of the discussion was encouraging greater density.

Mark Davis of Davis Enterprises said predictability in terms of code compliance is what he values most as a developer. He shared his experience with the City’s pre-application process as it relates to his redevelopment of a shopping center on 7th Avenue and Indian School Road.

After reviewing the site, drawing plans and preparing a budget and timeframe for the project, Davis said the City made new comments after everything was submitted for the appropriate permits.

“New items were brought to the table that were not brought before,” he said. “What would be very helpful is having that all put out in front so we have a predictable process for determining cost and expenditure to work around. Surprises are no good.”

Matt Seaman of Metro West Development said the unique context of each site needs to be taken into greater account by the City when inspecting.

“Whether you’re building 200 apartments or 10 or a restaurant, each site is different,” he said. “We get through the permit stage and we start digging in the streets or building something, and it seems like there’s becoming a larger and grayer area of what type of leeway inspection groups have.”

Seaman added that working with older or historic properties is the most challenging because more infrastructure needs to be updated by the developer.

“It seems like some of our project costs move up,” he said. “It’s a burden put on the project.”

Lorenzo Perez of Venue Projects said one economic development strategy the City of Phoenix could take advantage of was the creation of parking nodes. This could be an effective use of city-owned vacant lots. Perez also cited clashes with the neighborhood close to his development The Yard, which is located on 7th Street south of Bethany Home Road.

“I really want the city to question how much power the neighborhoods are given,” he said.

Christina Noble, principal of Contour Design Studio, continuing the theme of parking. She talked about her work on the Creative Center of Scottsdale, a redevelopment of a gun store and shooting range.

“You can effectively buy your way out of parking requirements” in downtown Scottsdale, she said. “The project I’m working on has a tight site. We can only get eight spaces in there, but we’re required to have 27 minimum.”

Noble said the City reconciles its parking issues with infill development by allowing developers to purchase parking spaces from the City, which uses the funds to subsidize parking structures. She added that the City also allows developers to negotiate lease agreements with each other to share parking lots.

Once the department has met with design professionals, developers and property owners, contractors and representatives of neighborhoods and communities, Stotler said it intends to deliver a proposal to city council filled with recommendations for amending city code.

She said the sessions the Planning Department is holding share the spirit of the Reinvent PHX and MyPlanPHX initiatives: input.

“All those things are wonderful tools to help us see what people want and where,” she said. “What we’re trying to do with this forum [for developers] is figure out how to make it all happen, where the rubber hits the road.”

There is two last “listening sessions” on infill development tomorrow, Friday, June 14, 2013. The first’ll be at the AE England Building from 8am to 10am for the neighborhood. The second will be open to the public and will be held at the same location, later that day from 3pm to 5pm.