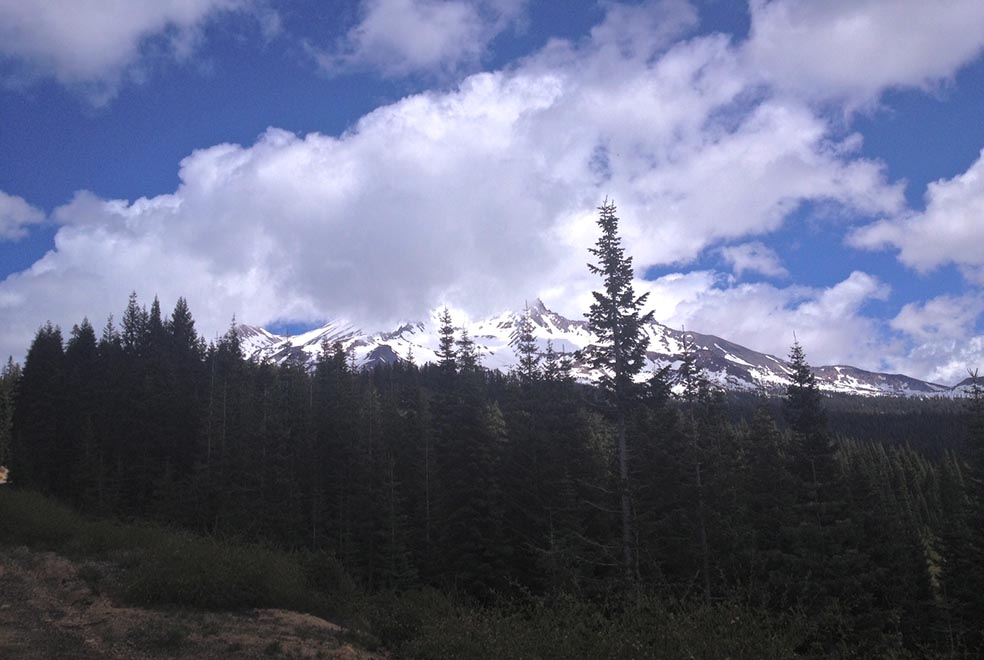 How to Vacation with a Low Carbon Footprint

It was February 4, 2013 and Memorial Day Weekend was coming soon (just four months out). The age old question haunted me – where should I visit next? Planning for the three-day weekend started a little over four months out because I did not want to pay tons of money in airfares and hotels. I thought, “Why plan a vacation that will not only be expensive but will also generate a high carbon footprint?”

So I started thinking about what plan would work for me and also be good for the planet. This question has never had many good answers, which often made me wonder if I am competing with earth for my survival. Why are my choices always bad for the planet? Am I a parasite on earth that will use all its resources to survive and destroy it while in the process of living a vibrant life? This could not possibly be true, there was definitely something I was missing- the balance between what I wanted and the things I needed.

I thought that there had to be a better solution to planning a vacation than drowning myself in a moral dilemma every time I thought of taking a break from work. This meant that I had to follow my heart and do more than just go somewhere. I needed to know why I wanted to go there and plan more intelligently to get there on a low carbon budget.

Since I had heard and seen the pictures of the active volcano in northern California, which rises abruptly and stands nearly 10,000 ft above the surrounding terrain, I had wanted to visit Mount Shasta. Mountains have always inspired me since I was a child especially after knowing that all the major rivers of the world have their headwaters in highlands and that more than half of humanity relies on the freshwater that accumulates in mountain areas.

I could not wait to experience the excitement of being in the midst of the magical company of the large, silent and powerful volcano. The mountain is approximately 280 miles away from San Francisco. Per calculations from Cotap.org, if I decided to drive my new compact car up the mountain valley and back, I would generate 120 kg of CO2 equivalent.

Per the World Bank, this footprint from just one trip would be more than what a person living in a different country might produce over 365 days. I knew that this idea would not work for me. I needed to think out of the box. I figured that if I were to share the car with my friends, my footprint would automatically reduced by one-fourth. The same would also be true for my lodging footprint.

It was starting to dawn on me why more densely populated cities like New York and San Francisco could boast of a lower per capita footprint that their counterparts. Obviously it was more efficient to invest in public spaces like a park in a city like San Francisco than it would be for a city like Phoenix. The only way to keep my goal of a low carbon footprint was to share resources like gas with more people.

Though the idea of inviting my friends to plan a group trip to Mt. Shasta was inspired by my selfish motivation of planning a low carbon vacation, I was excited about the fun a bunch of us would have hiking and biking together. A few email and google hangouts later, the plan was in place.

On Saturday, June 1, the seven of us started together to the small cottage we had rented for two nights from AirBnB, which is a website that allows for multi use of the unused properties by allowing owners to rent their properties to others. The property is available to other people for use when it is not in use by the owner, and the owner also gets to make some money in the process. This is such a fantastic idea.

Now, when I was over worrying about a high carbon footprint vacation, I wanted to focus on my bigger goal – seeing the mountain up close. I had planned hiking a few trails around Dunsmuir, to strand on the snow covered slopes of Mt. Shasta.

We reached our cottage in Dunsmuir in the afternoon. Shortly afterwards we headed out for a small hike to the Hedge Creek Falls. We were all tired from the long drive, and did not want to walk much, but the fresh forest air lined with the smell of pine trees recharged us all.

I spotted a small natural waterfall, so I ran through the unpaved forest trail lit by the sunlight filtering through the dense canopy cover. It was a little hot outside, but inside the forest it was cool and comfortable. I wished cities understood the need for conserving forests to reduce their energy demands.

Fifteen minutes later I was at a clearing where the pure cool water of Hedge Creek rushed through the 30-foot drop to join the Sacramento River. This was a marvelous view. There were a few families with kids and dogs enjoying the view.

“Isn’t this beautiful,” asked an elderly woman, smiling. I nodded as I sat near the waterfall listening to the gushing water as it hit the rock under it. The water sprayed around the waterfall like a light rain. All my thoughts vanished as I sat there and thought of how wonderful it would be to hear this everyday.

When we lose touch with nature and get caught up in our every day urban life, we forget the capacity of nature to de-stress us and bring ourselves back to us. Instead we look for energy intensive options like using an indoor gym or watch television to clear our mind.

I had forgotten how a short hike through a forest could help me forget so many of my trivial daily  problems. To enable happier societies and thriving communities, city planners need to provide people with access to nature. This brings people together as a community and also makes them value nature in its rightful glory.

My friends joined me near the waterfall. After spending an hour sitting by the waterfall laughing and sharing stories we headed back to the cottage.

Dunsmuir is a small town and there are not many vegetarian local restaurants so we decided to add to the local economy by shopping for groceries instead. 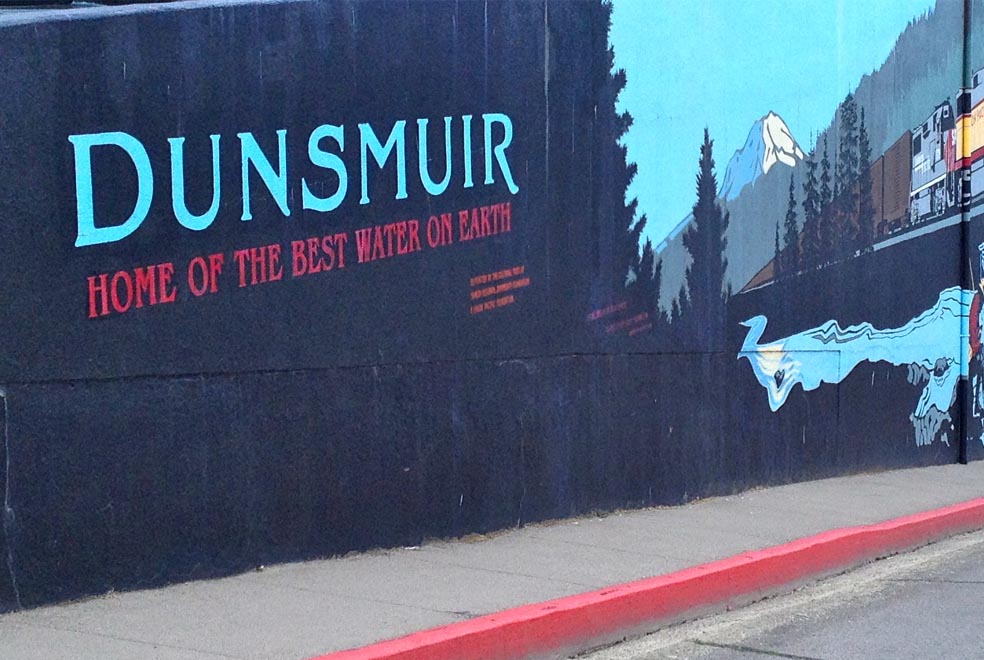 Once home, we all cooked together. I was surprised how cooking dinner did not feel like a chore because we all talked and laughed while we cooked. I wondered if the public spaces in cities need to provide such opportunities for people to interact comfortably while they go about their lives. Farmers market and neighborhood cafes provide such an opportunity. I wondered if governments could support such businesses to bolster sustainable communities. By the time I finished this thought in my head, it was time to eat.

The next morning we were all ready in the morning for our hike to Mt. Shasta. As we drove towards the mountain, its size became more apparent. It stood tall, dominating everything around it. Its summit towers at approximately 14,000  feet above sea level. It had been a beautiful home to many people from different places and faiths since the last 7,000 years.

The pristine beauty of the mountain touches everyone in a different way. I was enamored by its  magnificence as it stood adorned with pine trees and decorated with snow on the top. The air near the base was fresh and pure. Though the air was a bit thinner at Bunny Flats, which is at approx. 7,000 feet, it made up by its high quality. 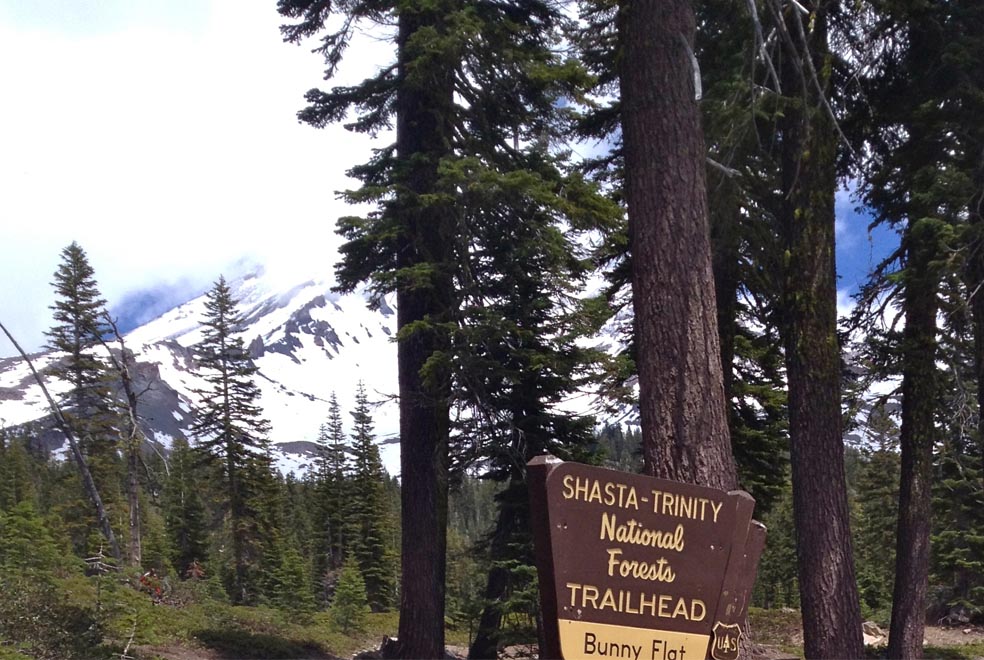 While hiking up the slope we shared smiles and small conversations with our fellow hikers. In less than ten minutes on the trail we could see big patches of snow. It was amazing to touch snow in the middle of summer. The tree cover and the serenity made me feel that I was transported to a different planet. The planet where I lived everyday has tall buildings that I could take an elevator to reach the top of. The planet where I lived everyday did not have mountains, which challenge me everyday to reach the summit. Nature challenges us in more ways than we realize and helps us evolve everyday.

The mountain had nourished me even when I did not know, just like the other 22 million people who depend on the Sacramento river and the other innumerable people who enjoy its ecosystem services every day.

As we hiked back to our car and drove back to our cottage to cook another much needed dinner I pondered about what I had given back to the mountain in return for all what it gave me.

I realized that I could still live a productive life without destroying the lifelines of the planet like its rivers, its forests. These are the lifelines that make life possible for me and mine. I need to know more about how my choices impact the chance of my species to live on this planet. It is my duty to give back to the planet and the mountain that never asked for anything in return.

It is clearer than ever that the planet has given me all that I need, and my choices do not have to compete with its wellbeing. Moreover, it is clear that the wellbeing of earth is the key to my own.