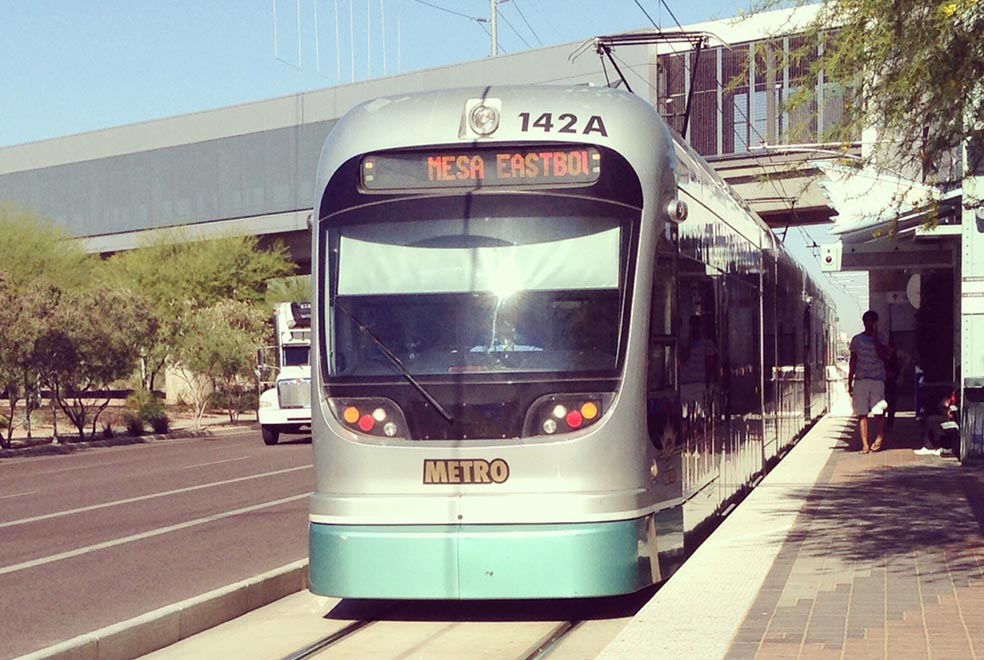 Today’s post is by contributing writer Lucky Sharma and is part of her series talking about her experiences trying to live a sustainable lifestyle in two cities – San Francisco and Tempe.

In 2010 my husband and I moved from the hundred year old Victorian San Francisco apartment to an apartment complex in Tempe, AZ. I had heard horror stories about the heat in the valley, but I did not pay them much heed. My friends told me that I could easily get a house with a yard for real cheap. But I knew I didn’t want to increase my carbon footprint by moving into a bigger house just because I could afford it.

While looking for a home, all I wanted was that it be at a bikeable distance to my school (ASU).  Obviously I was not going to drive to school every day to study Sustainability. Plus, I wanted to get my everyday exercise by commuting on my bike to school.

It was the first day of school and I stepped out of my apartment at 8:15 am and landed in an 88 degree Fahrenheit oven called Tempe. I had just walked a few feet to get to the Light rail station and I was already sweating. “Wow,” I thought “today is a really hot day.” (Little did I know that it was one of the cooler days in August.) The ticket machine for the train ticket was easy to use and I got a full day ticket pass for $3.25. “Cheap,” I thought “especially compared to the Bart in San Francisco. This probably makes students use the light rail more than they would otherwise.”

The station was mostly full of youngsters with their bikes and skateboards, dressed in summer clothes and flip-flops. If it were not for the heat I would have thought I was on a Caribbean vacation. I assumed they were probably students from ASU. The train arrived on time as was mentioned on the light rail website. I never thought so many of us would fit in the almost full train, but we did. The Bart was never this full, I thought, except in peak hours. “Tempe is a college town so of course this is the peak hour,” I thought.

The Light Rail train was much more modern looking, a little narrower and thankfully much cleaner than the Bart. There were hooks on the top near the hand rails to hang bikes up, but many bikers held on tightly to their bikes while supporting themselves on to the hand rails. 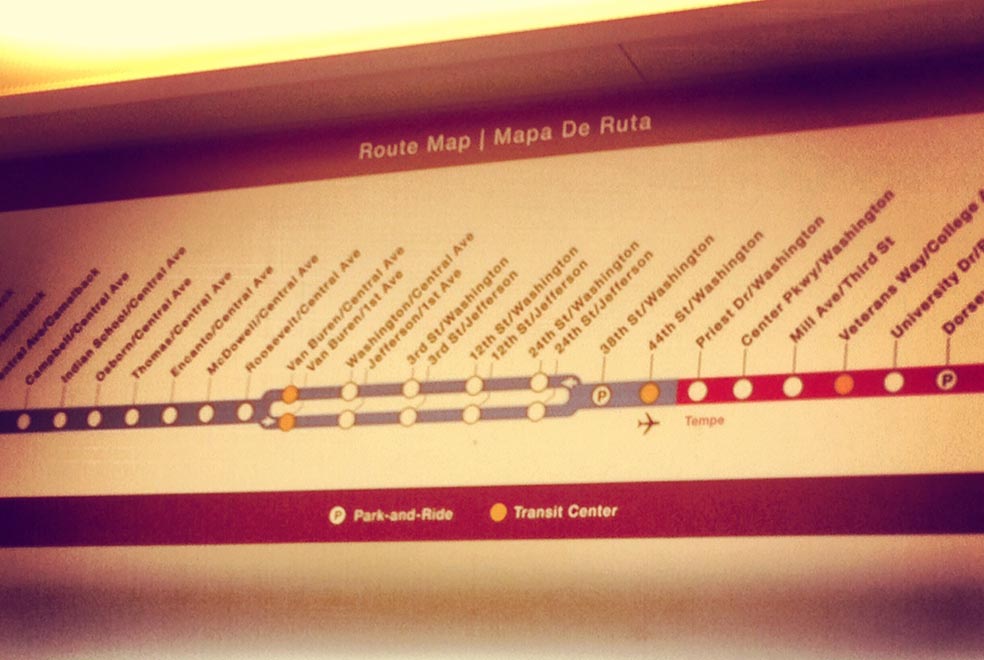 There were a few dogs on the leash as well. I loved the little pug with a bow. “She is so cute,” I said to the pug parent. She smiled and said, “Cindy always get everyone’s attention,” and gave her a kiss. She told me when and where she had adopted Cindy. I always love to have such small conversations with my co-passengers. It makes me feel that we are all connected to each other.

The light rail was brightly lit by the sunlight shining through the big tinted glass windows. It rolled along as part of the street traffic with cars on its both sides. It has a dedicated lane of its own. The rail tracks are engraved into the road like snake tracks on sand, an interesting part of the urban jungle.

The first stop was next to a strip mall with a few restaurants, grocery store, and a ‘Park and Ride’ lot. I think the idea behind choosing the stops was to make the local businesses around the rail corridor more accessible. Also the free parking lots were an incentive to enable more people to use the Light Rail network. People who lived away from stations could park their automobiles and hop on the light rail – good planning.

The stations are secured by low dividers and lead to sidewalks through dedicated pedestrian crossings. I thought this would keep the pedestrians safe, but right then I saw a couple of teenagers  sprinting on the lanes parallel to the stations to catch the train – exciting but not safe. Obviously city planning for safety was good but not fool-proof. 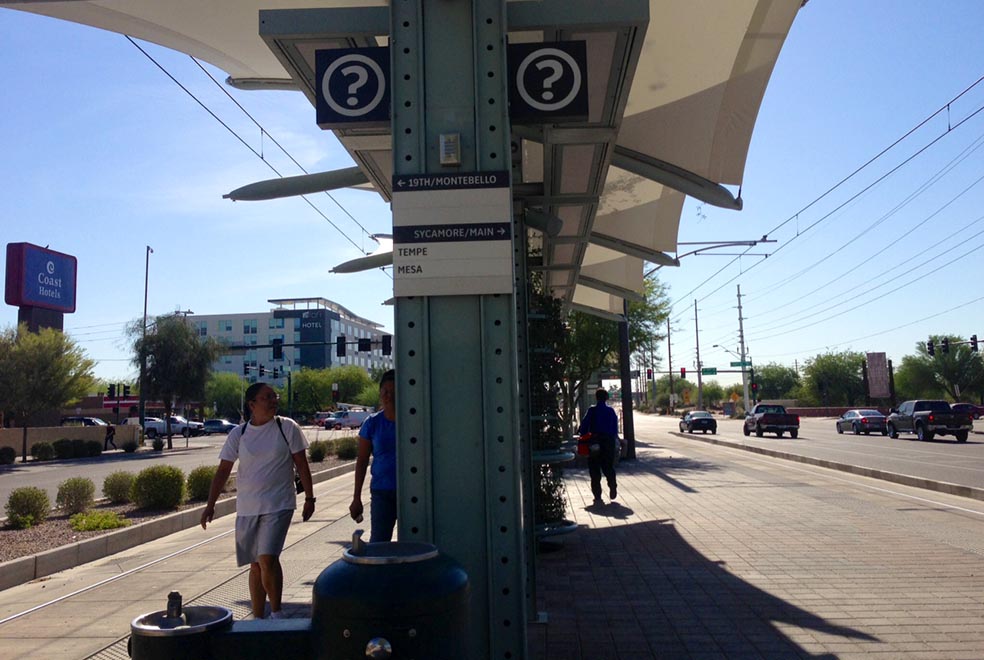 Something outside the train caught my attention – cyclists. I was really excited to see a lot of people biking on their cruisers and hybrids. A fearless few were on the road, with the cars. I think that sharing the road with cyclists keeps the traffic safer for everyone, because it makes drivers pay more attention to the road than to their smart phones.

While waiting for my stop I glanced over the trip map near the sliding glass doors of the train. It clearly marked out the stops. This really helped me confirm my directions from google maps, without bothering my travel mates. Shortly I was on the 3rd street Transit Center, which was my stop. The Tempe Transit Center connects Light Rail commuters to the Orbit network, a free bus transit network that connects the Tempe neighborhoods around ASU to the Light Rail system. It was obvious that the city had planned the public transit system to make it accessible to a lot of people, especially the students.

As the train started to come to a halt, I realized I was trapped in a small crisscross maze of bikes and pet leashes, but I managed to get out in time before the doors closed. Not many people were on the train when I got off. It seemed like most of the commuters were students.

As soon as I stepped out of the train, the hot wind hit me (ouch!) This reminded me why I chose not to bike to school. ASU was just a few yards away so I decided not to take the Orbit bus. I crossed the side walk on the opposite side of the road as a few students (I assumed they were students) scooted past me. I suddenly realized that I need a scooter, and why not, especially now when I am student.

As I almost ran towards my school trying to make it before time for my 9am class, I was on a continuous hunt for the little slivers of shade from the native trees planting near the sidewalk. But the trees were not placed close enough to each other to make an arcade and I was not a fan of that design. I wish I took the Orbit bus, but it was too late, the few yards now seemed like a mile or so. A lot of people were walking but it seemed like I was just a few of the lot who were not used to the heat. The others went about their business not caring about the heat.

There were hardly any cars on the little stretch between the Tempe Transit Center and ASU. As soon as I saw the small strip of shops near the school, I crossed over to the other side to be in the shade. Right then I saw a coffee shop called CupZ. “Ah, a local café.” I whispered to myself in delight. The heat had made me almost run to the shade, which afforded me enough time to order a coffee. Thankfully the line was not long and in a few minutes I got my iced cup of joy.

I emerged out in the heat with a chilled coffee in my hand. Yes! I was ready to take on the AZ heat.

Tags: lucky sharma, public transportation, San Francisco, sustainable cities, tempe
« The Dalai Lama Highlights the Spiritual Dimension of Saving the Planet at the Environmental Summit in Portland  |  A City with a Variety of Modes of Transportation is a City with Better Public Health »