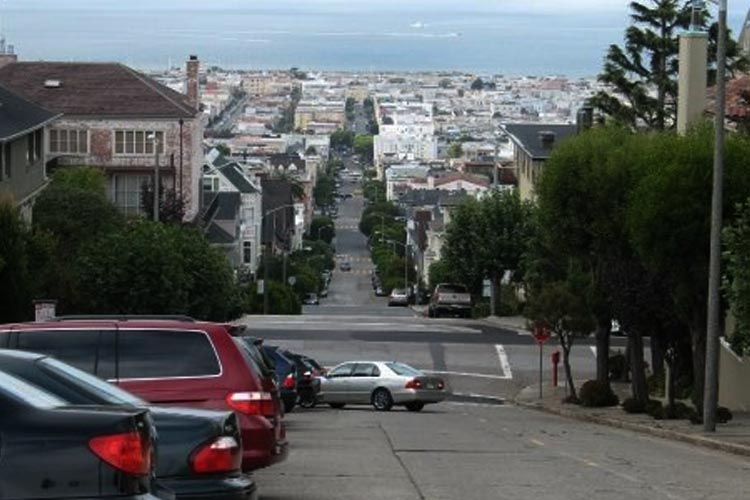 Musings on a Sustainable Urban Lifestyle in San Francisco

Lucky lives in two cities – San Francisco and Tempe. She’ll be sharing her observations of both cities in a series of posts about the sustainable urban lifestyle. This post will be published in two parts. Below is part I:

Coffee is a BIG DEAL in San Francisco. I knew this pretty much as soon as my husband and I moved into our third floor apartment in the Pacific Heights neighborhood in 2009.

The morning after we moved in was bright, sunny and perfect to get out and explore the community we were now a part of. My husband had already discovered Yelp and would not make a decision about any place to drink or eat without it. Me, being a novice, let him do the research from this crowdsourced, free, shared resource that ties the community together.

The big adventure for the day was the pursuit for a ‘perfect’ cup of coffee. I could not wait to get out of the Victorian apartment of the century-old house which was in good condition (umm..we were paying over $2000 a month for it). He seemed to have disappeared into the blue screen- moving his eyes and fingers quickly, scrolling through hundreds of reviews and comparing ratings and processing all this. At last his smiling face appeared above the computer screen. Victory (I thought), he was able to finally choose a place.

I flew down the three flights of stairs and it struck me that running up and down to get to my apartment is enough to keep me fit like the city folk. I came to a sudden halt, almost colliding with the kids who were running up the stairs. I was surprised to see kids in an apartment building, I always thought that suburbs existed because couples with kids needed a front yard, swimming pool and all the extra space.

The mother was a thirty-plus petite female. “Hello,” she said, “I am Debbie, we live on the first floor. You guys moved in yesterday, right? We heard you move in.” I was a little embarrassed and instantly apologized for creating enough commotion to let our neighbors know that we were moving in. She replied, “It is fine, a little noise keeps us informed that we have neighbors, and we don’t feel lonely. It is one of the fun things people living in big houses miss out on .” We smiled and went our way with my husband close behind me.

Outside the small buzzer-controlled door was the sunbathed neighborhood with a bunch of kids enthusiastically biking on their small cycles swooping down the sidewalk as they followed a middle aged man dressed up in his biking gear. I guess this is why the kids don’t need a front yard. They can conveniently use community space to have fun and run around.

While we walked up the hill on our coffee pilgrimage, some runners swept past us, some with strollers and others with dogs. As we approached the Alta Vista park I saw a few groups standing and a few kids dressed up in ballet costumes.

‘Ah’, I thought, “it is a school. It was nice to see that the neighborhood kids could probably just walk to school, and it totally blended in as part of the neighborhood. When I looked closely, I saw that the top floor had netting around it, it was where the tennis and basketball courts were. This really changed my perspective about schools as large open spaces with concrete surfaces that might add to the heat island effect (Spoiler alert: I will talk more about it in my later posts). Why build wide when you can build up!

We were almost inside the park and the view opposite to the park was breathtaking – all green and blue. We could see the Bay, which was like atlas three miles away. It was surreal, I could not believe the air quality. There was no smog and the visibility was high and it was clear why. In the 15 minute walk I had not seen a single car on the street. All the cars (mind you, no trucks or minivans) were neatly parked right next to the sidewalk as far as I could see,

The park was on a little hill. At the highest point the park plateaued and I could see the Bay in the background of these beautiful old Victorian houses, which were like ghosts from a bygone era that stood strong on the slanting slope of the hill. Saving old homes is doable, I thought, as I heard the seagulls, kids, and dogs.

The park seemed to be the perfect community space, where people were playing with their kids and their dogs, playing guitar, having a picnic and also sun bathing. I was starting to understand why open spaces in a  city are so vital for community development. Why have a garden in every house and increase the water footprint per person when you can share a green space? The answer is obvious but not many cities have been able to include this in their zoning laws.

The walk through the park ended with a set of stairs leading to the sidewalk where I saw a couple of bikers resting while the others picked up their bike up the stairs to just rest in the park. A few high school kids were training by taking turns to run up and down another set of stairs. All these people were exercising without any need of electricity, and were breathing in fresh air directly from the trees. What better alternative could there be for a healthy lifestyle without a high carbon footprint. Clearly, indoor work-out spaces could be done away with completely, at least during the day.

By now I was missing my bike, as I was already planning a ride around the neighborhood. I have always been able to experience a place so much better on a bike than in a car because the crux of a bike ride is the journey not the destination. On a bike I notice things that may seem little but are important, like the flowers in bloom, families in the park, and the smell of an awesome corner bakery, rather than speeding on the four wheels completely unaware of anything but the cars around me.

Stay tuned to part II of Lucky’s post on a sustainable urban lifestyle in San Francisco to be published tomorrow!