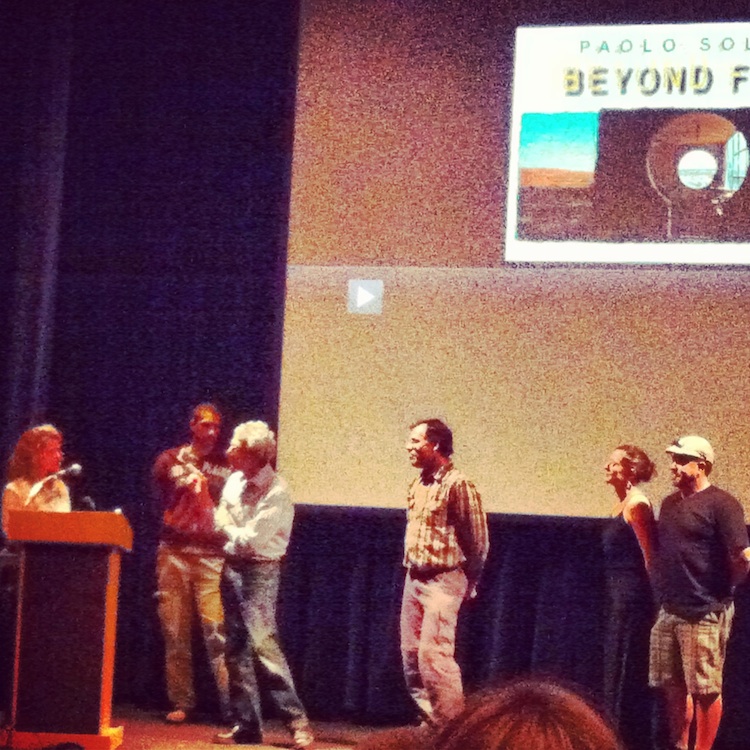 Why You Should Go Watch “Paolo Soleri: Beyond Form” Tomorrow…

When I asked a few of my friends here in Portland if they knew who Paolo Soleri is, they said no. When I tried to jog their memory by mentioning Arcosanti, I was met with a blank stare and still had no luck. Some of these friends were even architects or in the building industry and they didn’t know Paolo Soleri.

I found this to be tragic. I think everyone should know who Paolo Soleri is, not just in Arizona, but all over the world. He was such a visionary and an uncompromising original. Yes, he worked under Frank Lloyd Wright, but his work looked nothing like Wright’s, at least not his mature work. In fact, he left Taliesin after only a year there, because Soleri wasn’t about to become a Wright disciple. He was the kind of leader that was to have his own disciples. He started his own school and his own community based on his own ideas of how people should live in harmony with the planet. In my opinion, Soleri was just as much a visionary as Frank Lloyd Wright, but unfortunately, he enjoys only a fraction of Wright’s notoriety.

So when I watched the movie, “Paolo Soleri: Beyond Form” by Aimee Madsen at the Modern Phoenix Expo, I was really happy that Soleri’s life and work have been memorialized in a beautiful and soulful film. The movie has great footage of Soleri in his youth, building things with his own hands. And it shows the communities he created – Cosanti and Arcosanti – and the profound impact those communities had on various people who have been involved in them. Plus, it shows Soleri in his old age, before he died, a very charming and endearing man who stood fast to his principles for all his life.

If you live in Phoenix – I highly recommend you catch the second screening by No Festival Required of Madsen’s beautiful film, “Paolo Soleri: Beyond Form”, which is playing tomorrow, April 28th, at 1:30 and 3:30pm at the Scottsdale Center for Performing Arts. You can buy tickets through the box office online, for $7, here.

Photo credit: Photo taken at the world premier of the film “Paolo Soleri: Beyond Form” at the 2013 Modern Phoenix Expo with the film’s creator – Aimee Madsen and her crew. Photo by the author.

Tags: aimee madsen, Arcosanti, cosanti, paolo soler i, paolo soler i:byond form movie, tribute to paolo soleri
« In Memoriam: A Timeline of the Amazing Life and Work of Paolo Soleri  |  Why We Should Cultivate Disorder in Cities »