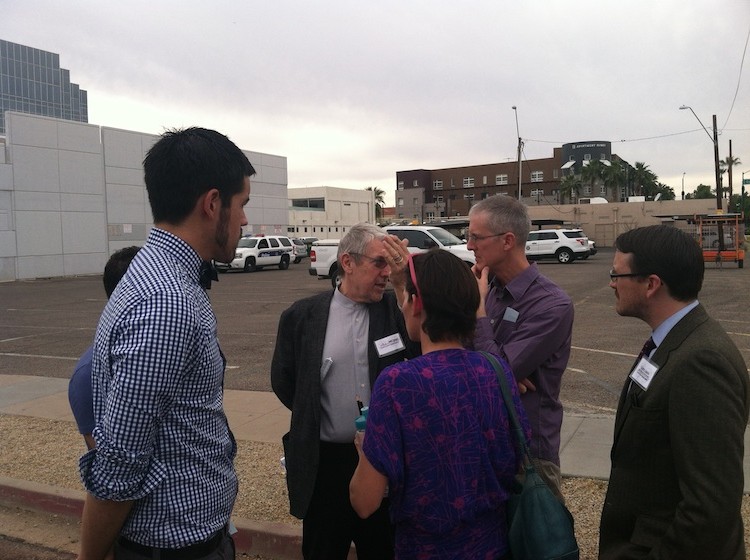 “Well…I am a bit prone to hyperbole.”

Throughout Day 1 of Phoenix Urban Design week, during the Urban Tactics Symposium, Jeff Speck (author, “Walkable City”) kept what could’ve been an overly technical and dry symposium light, fun and interesting with his wry sense of humor. Around 30 people, mostly the usual suspects of architects, preservations and urbanists, gathered in the Burton Barr Library’s Pulliam Auditorium to hear Speck’s talk, “Designing the Walkable City.” Unfortunately, the people who needed Speck’s talk the most, our City Streets Department and City Council, were conspicuously absent. The talk, something of a summary of Speck’s book, encapsulated Speck’s “General Theory of Walkability.” In “Walkable City” achieving walkability is broken into 10 specific steps, but for the symposium Speck focused on four main areas:

A Reason To Walk

Jeff Speck said fairly early in his talk that, “the image people have of your City, is what they see in your Downtown” and he’s certainly correct. Speck also pointed out that in the US 77% of the Millennial generation wants to live in urban cores and that 64% of Millennial choose first where to live, and then look for a job in that City. So if Phoenix wants to attract young, educated people to move here, our post war model of suburban sprawl must shift to a new paradigm that’s focused on downtown and a thriving urban environment.

“If you own a car, it makes sense to drive it all the time,” was a message Speck repeated a few times throughout the day. Speck pointed out that about 4/5ths of the cost of owning a car are fixed costs, so since most Phoenicians own cars already the economically smart decision is for them to drive a lot. So how do we get all of these car-owning people to walk instead? Speck pointed out that automotive congestion is one of the easier ways to entice people of their cars, however congestion is rarely an issue on Downtown Phoenix streets. So if people aren’t being enticed out of their cars due to excessive auto congestion, then walking must be made so much more appealing than driving that people choose it voluntarily. That’s where the next steps of walkability come into play.

“A walk must be safe, but more important than actually being safe is the feeling of Safety,” said Speck. Interestingly throughout the day as the safety of urban places was discussed the subject of crime never came up. The real killer in urban places isn’t crime but rather cars. “I think maybe Departments of Transportation have killed more Americans than all our wars,” Speck joked (or was it a joke?).

Speck outlined how almost all street design standards in post war America have been in favor of the automobile and at the expense of the pedestrian. From overly wide auto lanes, the mass elimination of on-street parking, push-button walk signals that force pedestrians to wait too long, to overly wide mandated turning radii, almost everything that a typical American city streets department does endangers the pedestrian and allows cars to drive faster. Speck outlined how narrower automobile traffic lanes (10’ or so), bike lanes, and street trees all work in conjunction to protect the pedestrians on the sidewalk. Speck also cleverly quoted from Matthew 7: 13-14, “for broad is the road that leads to destruction, and narrow is the road that leads to life.”

Considering Phoenix has 4 months of blistering heat, some people seem convinced that it can never be a walkable city. Of course that ignores pre-1950’s photos of Phoenix that show our Downtown streets packed with people.  Mr. Speck pointed out that in nearly every place he goes, people claim that their City is “too hot”, “too cold”, and “too windy”, “too rainy” to be walkable. However with proper shading, street trees, green space, and plenty of cool buildings to duck in and out of, these issues can generally be overcome.

Mr. Speck did offer a message of hope to Phoenicians when he pointed out that many of our downtown blocks are already adequately sized. Smaller blocks allow pedestrians to take alternate routes; they promote density and do a host of wonderful things. In short, shorter blocks make for a more comfortable walking environment. Speck pointed out that many cities, most notably Salt Lake City contain huge blocks (600’ long) and thankfully Phoenix is blessed with more midsized blocks (350’ long) and thus Downtown Phoenix’s streets have ‘good bones.’

“Humans are social animals and nothing interests us more than other humans,” Speck said. Of course this means that a walk that’s the most interesting is a walk with lots of other people walking too. Speck outlined how buildings with permeable edges (that is places to go in and out of), minimal “gaps” in the urban fabric, and lots of different things to see and do help make a walk interesting. Especially in Phoenix where the cards seem so staked towards driving, it’s critical that our walkable areas are full of visual interest.

Urban Triage and Picking Our Winners

“I wouldn’t be hopeful about Phoenix if I hadn’t learned about urban triage.” ‘Urban Triage’, a phrase coined by Speck’s mentor Andres Duany, refers to the precise reintroduction of good urbanism into a place. Speck aptly points out that not all places are ever going to be walkable. In sun-belt sprawl towns like Phoenix it’s likely the huge majority of places won’t be walkable in the near future. This being the case Speck encourages we “pick our winners.” He pointed out the folly in trying to “sprinkle around the walkability fairy dust everywhere, that will end up in mediocre places.” Rather Phoenix should focus on certain streets that already have urban character and some of the elements of walkability (i.e. Roosevelt Row), and really working to strengthen our strengths. He repeatedly pointed out how when Denver’s LoDo began it wasn’t a simultaneous district-wide renewal. Rather it was one street, and really just one block that got it right. When people saw how well that one block did, they began replicating its success throughout Downtown Denver.

Often times when out of state lecturers come to Phoenix they can be real downers, claiming we’re unsustainable, beyond hope, and the like. It was refreshing to hear the Nation’s foremost expert on walkability have such a hopeful message and a largely positive outlook for Phoenix. Speck lauded Phoenix for being ahead of the game with our 20-mile Light Rail line, for having good bones with our medium sized blocks, and for having the beginnings of walkability in some areas. Even after gazing upon the empty dirt lots South of Hance Park he blithely said, “well…I’ve seen worse!” Speck encouraged Phoenicians to continue to focus our efforts around Light Rail stops, densifying those neighborhoods and applying urban triage to the areas that have a true chance to be walkable. Speck also pointed out that most large sun-belt cities aren’t really doing much to speak of in terms of walkability and to that regard perhaps Phoenix has the exciting opportunity to be a regional leader for a change.