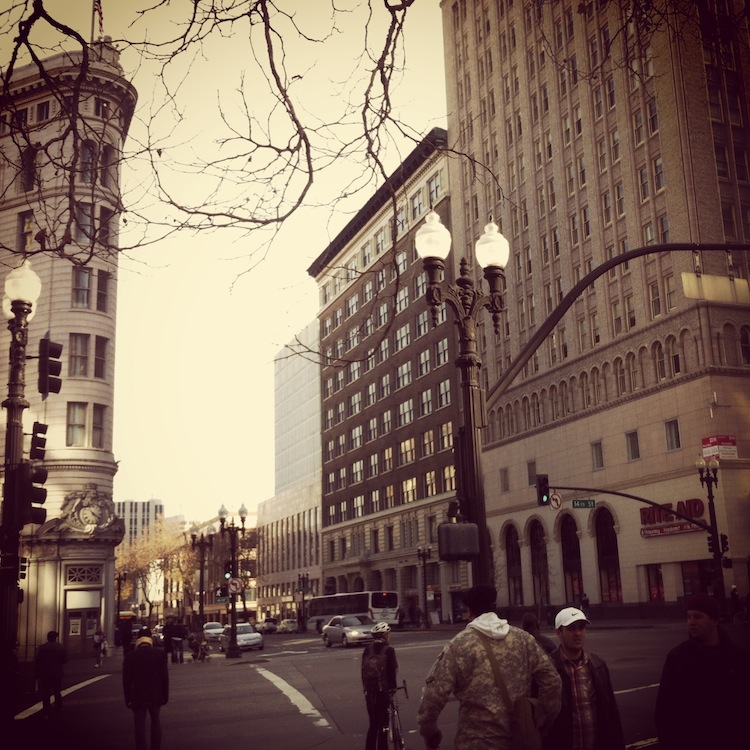 My 5 Favorite Things about Visiting the East Bay

I really enjoyed my New Years trip to the East Bay of the San Francisco Bay area. I had the pleasure of staying in Emeryville, a tiny city that abuts Oakland and Berkeley. In fact, it’s only a few minutes walk to those cities from Emeryville. I spent the majority of my 5-day vacation exploring the East Bay and just briefly visited San Francisco proper because the East Bay has so much to offer.

Below are a few of my favorite things about my trip.

1. It was easy to get around without a car.

As usual, I did not rent a car during this trip to Oakland. My gracious hosts, who were visiting Paris at the time I stayed in their fabulous loft, left a bicycle for me to use. Even though the Easy Bay is extremely bicycle friendly, especially in the area where I’m staying, I didn’t end up using the bike. 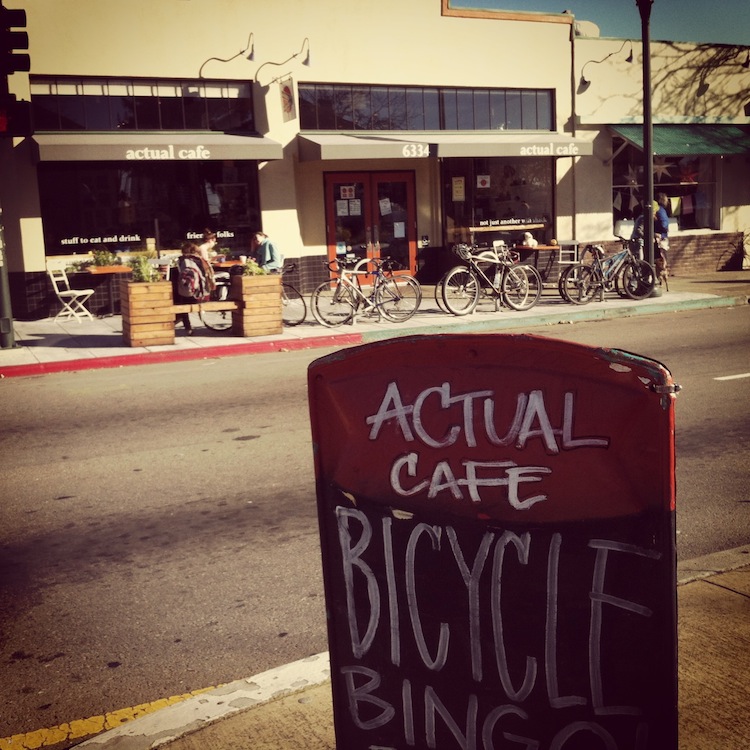 The Actual Cafe in Oakland is all about bicycles and bicyclists. It dons indoor bicycle storage and bicycle paraphernalia all over their walls and offers Bicycle Bingo every Thursday.

I made my way all over the place on foot and on transit. 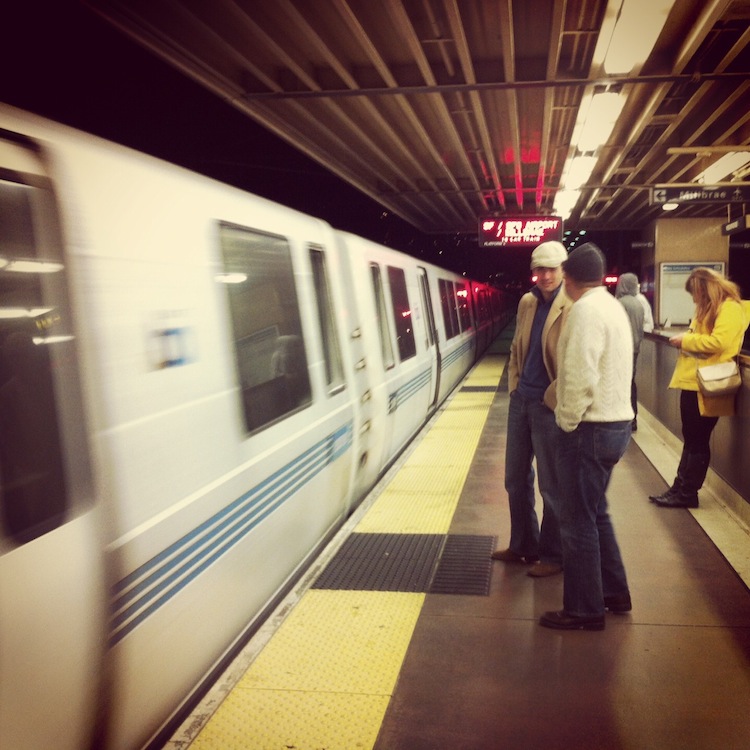 Waiting for the BART at the Rockridge Station.

I used the bus and the BART (Bay Area Rapid Transit) several times a day. Both systems are easy to figure out and use, even for a visitor. I downloaded the BART app (Embark iBART), which is just ok compared to other cities’ transit apps because the trip planner was difficult to make sense of. The most useful thing on the Embark iBART was the map which I referenced frequently to make sure I was going the right direction. For transit trip planning I relied mostly on my trusty iPhone Google Maps transit directions.Fortunately, for much of the time, I could access my 3G network while on the trains and in the stations.

Bus drivers were friendly and didn’t mind if you asked if they stopped at certain places and made sure you were on the right bus. After just a little while, I got comfortable taking the bus and the BART, which isn’t an extensive of a train system as, say, New York’s, so you can get the hang of it pretty quickly.

I heard about 10 different languages being spoken around me along with a multitude of different accents during my trip. Plus I saw people of all sorts of different backgrounds on the buses, restaurants and just walking on the street. The East Bay is a real rainbow region, which is always a welcome sight.

On New Years Eve, I decided to go to a movie. Using the Flixster app I found a Bollywood movie playing in a nearby mainstream theater. I was delighted at the find! It meant to me that there is enough demand for Bollywood movies for them to be playing regularly in the mainstream theater. Of course I had no trouble finding ethnic food, in particular Asian, which happens to be my favorite. Just a short walk from my place I was able to get high quality Vietnamese and Thai food. 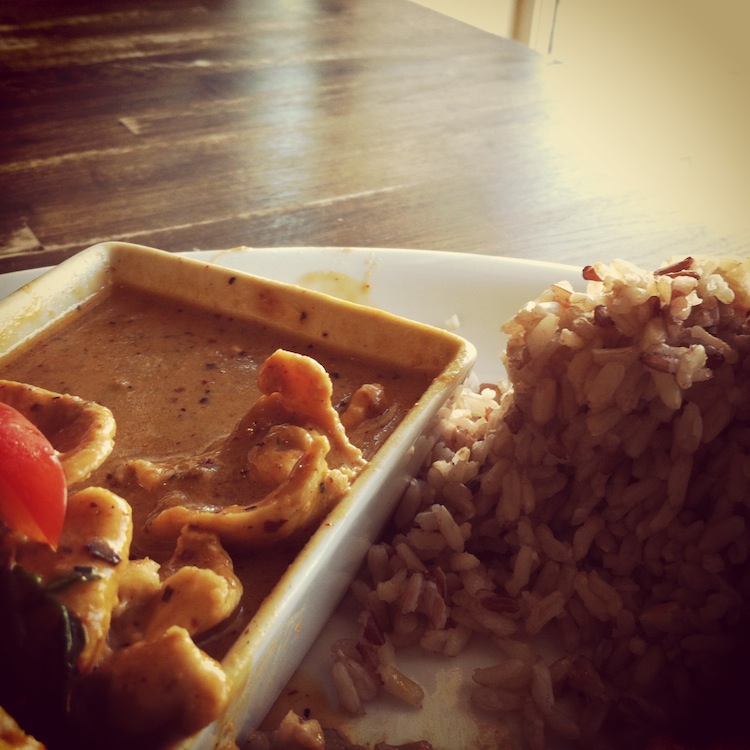 Chicken Panang from Anchalee in Berkeley.

Not only is Oakland ethnically diverse, but it’s also economically diverse. In the area of Emeryville I was staying in, it comprised of high-end industrial lofts right next to older, more affordable homes resulting in a wonderful mix of people.

In Emeryville, I was impressed with the dense mixed-use development I saw everywhere. It was very much in the vein of transit-oriented development – about 5 to 6-story residential buildings with retail on the bottom floor and underground parking. 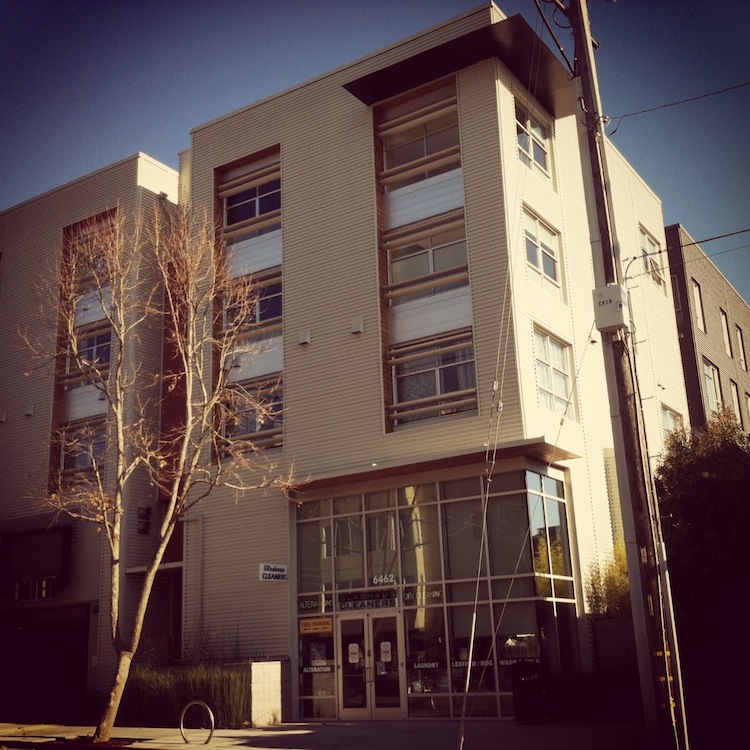 Mixed-use with housing on top and retail and parking on the ground floor in Emeryville.

Also a part of this smart growth were neighborhood parks. There was one just kitty-corner from the loft building where I was staying. It was a well-used park that brought vibrancy to the area. There were some great little restaurants/bars/cafes embedded in the neighborhood making for perfect places to walk to. Also, Emeryville is filled with old warehouses that have been converted into lofts or are used by other businesses. I stayed in such a loft. Adaptive reuse of these old warehouses injects character and history amid the new mixed-use development. 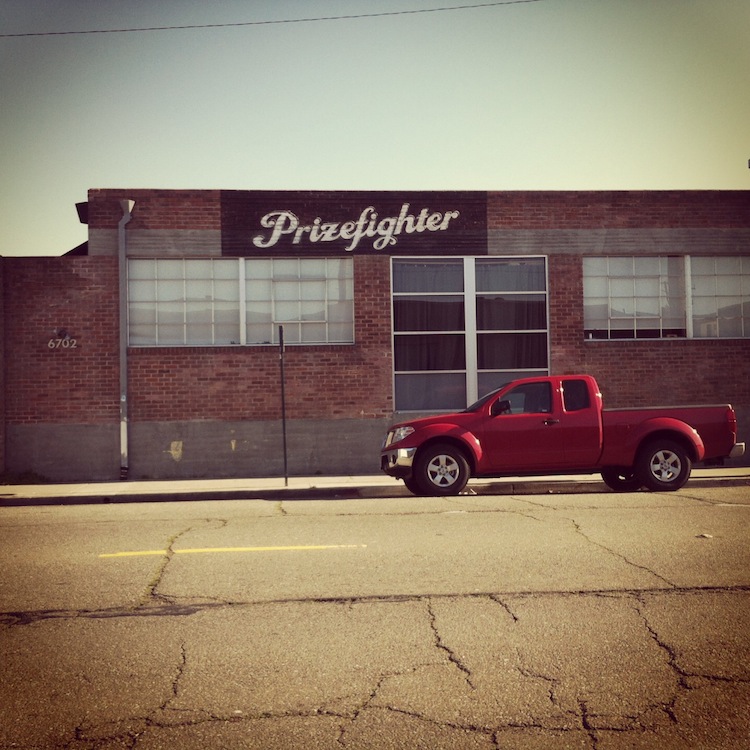 4. There is lots to do and it is all connected.

I liked that there were different scales of things to do that are all connected via walking, biking or transit. If I wanted a neighborhood experience, there were plenty of places right in my neighborhood as I mentioned in no. 3. If I wanted something a little bit more busy, I could walk to the corner coffee shop which was in Oakland, or down a little ways to all the restaurants, shops and parks that Berkeley has to offer. 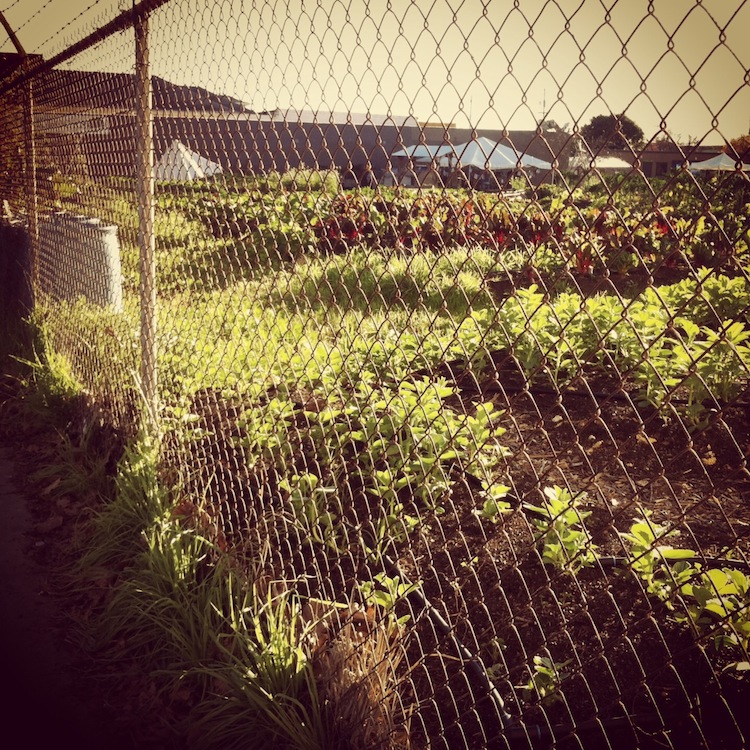 A wonderful community garden I happened upon walking around Berkeley.

If I wanted to experience the city centers of Oakland and Berkeley, they were easily accessible through bus/BART. 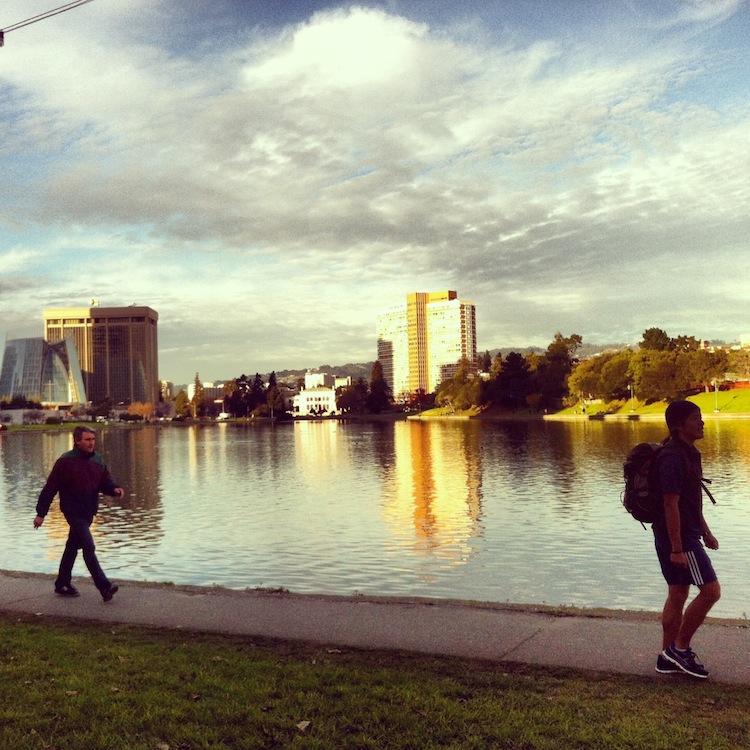 Lake Merritt was just a short bus ride away from where I stayed in Emeryville.

And finally, if I wanted the BIG CITY experience, I could always take the BART across the bay to San Francisco, which only took about half and hour total, including the bus ride to get to the BART station. 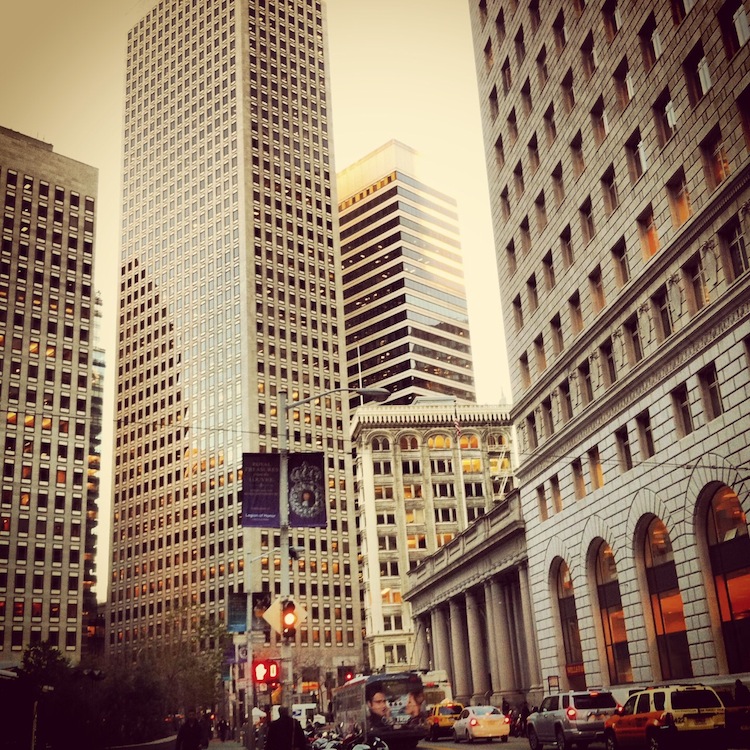 5. People/businesses aren’t afraid to have a personality or take a stand.

On my first day, I noticed that the Actual Cafe had a laptop-free weekends policy. They did this to encourage people to get their heads out of their computer and actually converse with people around them. Does this hurt them financially as it drives away people who want to work in their coffeeshop during the weeekends? Perhaps. But they took a stand, nonetheless, for person to person interaction at the risk of losing some business. 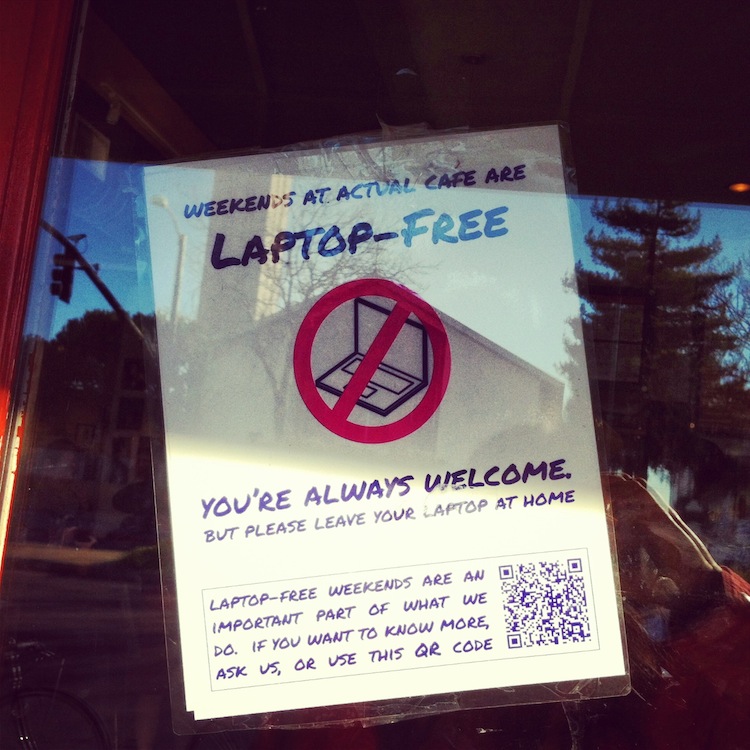 Another instance of people taking a stand is San Francisco’s check-out bag charge. Is this inconvenient for customers, do some feel like the government is interfering in their lives too much? Sure. But the city took a stand, nonetheless, to reduce waste through check-out bags by implementing this new law. The charge is negligible – only $0.10 a bag – but it makes you more mindful of every bag you use.

And lastly, I loved this re-appropriation of a couple of parking spaces into seating for a cafe in Oakland at Farley’s East Cafe. The city of Oakland took a stand for people spaces instead of parking spaces by paving the way for this to take place. 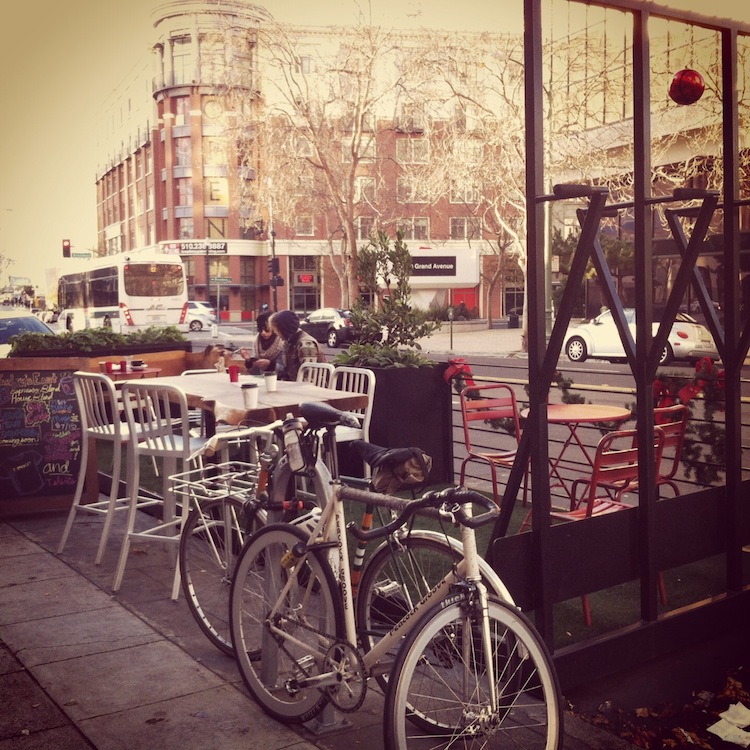