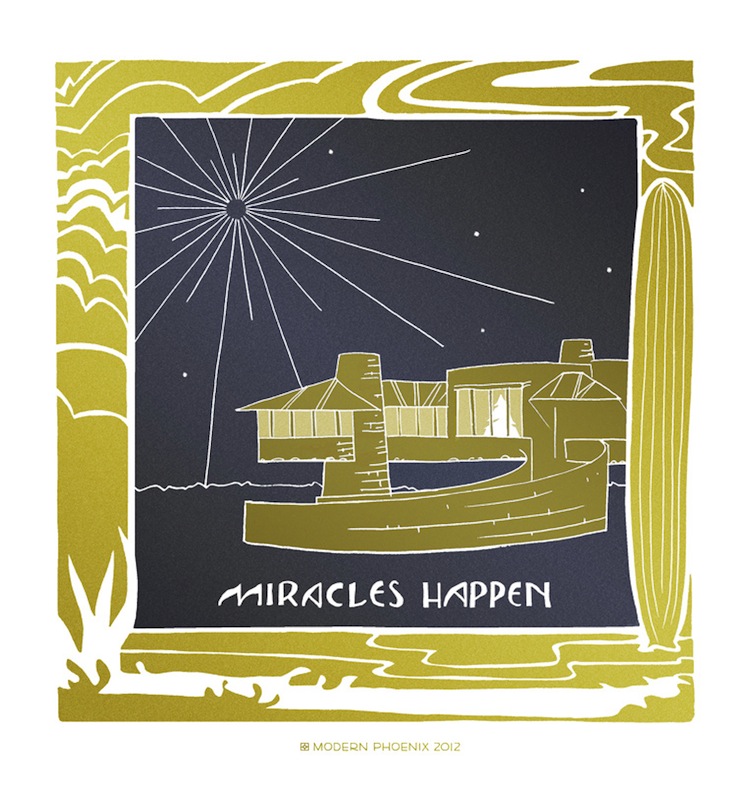 The David Wright House has Been Saved! (For Real this Time)

Tis the season to be jolly! After an epic 6-month long saga that has been nothing short of a roller coaster, the David Wright House is finally in good hands with plans in place to preserve it in perpetuity. The Frank Lloyd Wright Building Conservancy, the organization that first brought the threat of demolition to our attention, has come to the rescue! The preservation organization facilitated the purchase of the property by an anonymous benefactor that will transfer it to an Arizona nonprofit. The new owner will push forward a landmark designation by the City that will protect the house legally for 3 years, but even better, plans for it to be saved in perpetuity through the Arizona nonprofit. The most wonderful part, besides the preservation of the house, is that it will be used for educational purposes. This means that the public will benefit from this iconic piece of architecture in a meaningful way and multitudes will be able to enjoy Wright’s masterpiece instead of just one private owner at a time.

A better outcome could not have been expected other than, perhaps, the precedence set if the City Council were to vote for designation despite not having approval by the owner. But that battle has been saved for another time. Meanwhile, we can celebrate a preservation victory as the fruit of a world-wide community effort.

I would like to thank the Frank Lloyd Wright Building Conservancy for the work they’ve done to preserve Phoenix’s Frank Lloyd Wright heritage. Yes, this victory is for everyone in the world, but it is a special gift for Phoenix. I also appreciate the high level of respect for preservation that the Conservancy has introduced to Phoenix through this battle. Historic preservation will never be the same in Phoenix after the heroic battle to save the David Wright House. This fight has unearthed a huge cadre of regular people turned grassroots activists, professionals and organizations that hold preservation dear to their hearts. The historic saga to save the David Wright House may mark the beginning of a cultural shift in Phoenix towards preservation and away from private property rights at all costs.

I would also like to thank Mayor Greg Stanton for recognizing the importance of saving the David Wright House and for fighting for this outcome with every tool in his toolbox. Much hard work, negotiation, and rallying the troops has gone into saving this house, and the Mayor has been at the helm of these efforts from the get go. Thank you Mayor for your leadership on this critical issue.

I’d also like to take this opportunity to acknowledge the very talented group of professionals assembled by the Mayor to propose alternatives to 8081|Meridian where the developer could realize a profit and not have to demolish the house. It was a real honor and pleasure to be a part of a group led by Brendan Mahoney, the Mayor’s senior policy advisor, that included architects Will Bruder, Frank Henry, Colin Slais, Christina Noble, realtor Scott Jarson, attorney Jennifer Boucek and preservationist Jim McPherson. We put in many hours in sweat equity and discussion to come up with some pretty awesome alternatives. Though none of those alternatives came to fruition (which is just as well because today’s outcome is better than anything we could have possibly convinced a private developer to do) it was still a fantastic experience of how a community of dedicated and caring professionals donated their time and energy towards the common purpose of preserving one of the best buildings ever built in Phoenix. 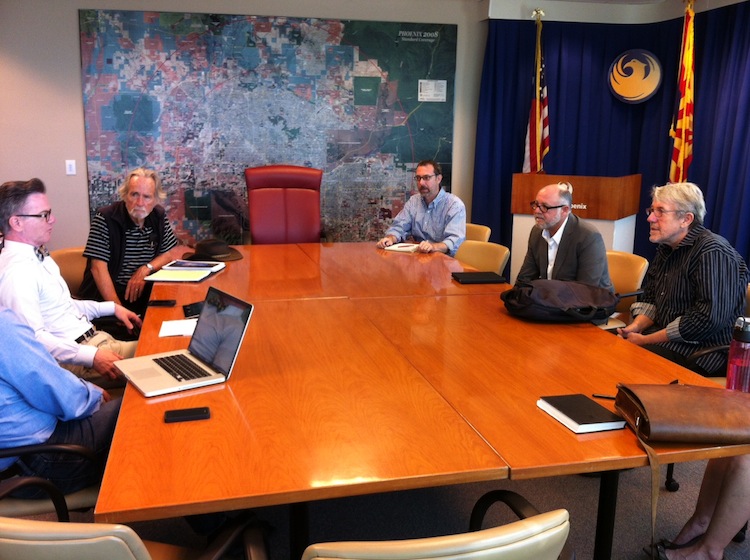 I’d like to also thank Alison King of Modern Phoenix who has worked tirelessly to rally the troops, kept us informed and has vigilantly been following progress to help save this house. Alison’s work thus far towards preserving midcentury modern architecture in Phoenix had raised the general public’s awareness of our architectural heritage enough so that the threat to the David Wright House really resonated.

I would be remiss not to acknowledge Grady Gammage for his pivotal role in this battle. His eloquent speech helped secure the initiation of the landmark designation process at a Planning Commission meeting that has protected the house from demolition so far. And throughout, he’s given freely of his expertise and time to help fight possible Proposition 207 challenges facing the designation of the house. If it weren’t for Grady’s involvement, we would not have such a strong legal background in the fight to save the house.

And lastly I’d like to thank Dan Mitchell for starting the Save the David Wright House Facebook group, which has been invaluable in galvanizing wide-spread support for the house. It has been a great forum to educate, inform and strategize about how to save this much loved house.

Let us celebrate! With the fantastic news of the preservation of the David Wright House I wish you and yours the very happiest of holidays!

Photo Credit: Lead Image is original artwork by Alison King. All other photos by the author.