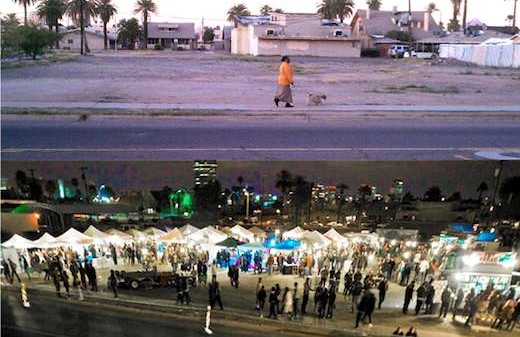 Since I’ve been boasting a great deal about how much I love Portland, some people have rolled their eyes and glibly said it’s not that great, especially in the winter months. It’s rainy and cloudy and people are prone to Seasonal Affective Disorder (SAD) there. According to the National Library of Medicine, “Seasonal affective disorder (SAD) is a kind of depression that occurs at a certain time of the year, usually in the winter.” I have no doubt this is true. I lived in Pittsburgh for a year and it was cloudy there on most days for all the long and numerous winter months and yes, it definitely had a depressive effect on me.

But I’d like to counter that here in Phoenix, we are prone to Propinquity Deprivation Disorder (PDD). Propinquity Deprivation Disorder, a term I just made up, is a type of depression that occurs when the streets are empty and no one is outside hanging out, walking or biking or jogging or conversing. Everyone is either inside a car or inside a building and no living, breathing human being can be spotted on the streets. Propinquity is known in these parts as Kevin Kellogg’s favorite word. He introduced me to this fantastic word when I met him two years ago and it quickly became one of my favorite words too. According to Wikipedia, it is

It’s true, with the advent of the Light Rail, a growing bike culture and a very nascent walkable cluster around the Roosevelt Arts District, that more people can be seen out and about and we are experiencing more propinquity now than we ever have in the past here in Phoenix. But it’s still pretty abysmal and Phoenix streets on the whole are very lonely. If you think this doesn’t have an effect on us, you’re wrong.

A recent study by the University of New Hampshire published in the Applied Research in Quality of Life found that people who live in walkable neighborhoods are happier. According to the study,

“A walkable community provides residents with easy access to post offices, town parks and playgrounds, coffee shops, restaurants, barbershops and club meeting venues. The ability to walk to these important locations in one’s home neighborhood has been linked to a higher quality of life.

Social capital, a measure of an individual’s or group’s networks, personal connections, and community involvement, brings benefits such as reduced isolation, career connections, and neighborhood safety. What Rogers and her team’s work suggests is that it is these benefits — facilitated by living in a walkable community — that enhance an individual’s quality of life.”

I can corroborate this study with my personal experience. When I was in Portland, the simple act of seeing people on the streets awakened a feeling of being nurtured and connected and I didn’t feel lonely there. On the day I flew back to Phoenix, my brother picked me up and took me to my parents house in Chandler where my car was parked. As I drove home to Red Mountain in Central Phoenix, the drive in the car and all the surrounding empty streets felt very lonely, especially since it was in such stark contrast to what I’d just experienced in Portland. Where did all the people go? It’s very hard to feel a part of a community when you don’t see your fellow human beings out and about except at select destinations.

So to those who like to point to Portland’s cloudy weather as a real downer, I’d like to say we have our own condition that incubates depression – PDD. It’s as real as the overcast weather in Portland. But the good news is that whereas Portland can’t change it’s weather, we can change our lack of propinquity. We can create more walk appeal, add more of a human-scale to our streets, and cultivate more usable and attractive public spaces and parks. But we can’t do this incrementally, because it’ll take forever to make Phoenix more walkable that way. We have to be all in, even if it’s in a small area, like the already-burgeoning Roosevelt Arts District. The recent federally-funded street-narrowing project on Roosevelt Road between Central and 4th Street is a perfect opportunity to be all in, though what I saw at the last public meeting on this project, the City is still dipping its toe into walkability and largely still putting the needs of cars first. More on this later..