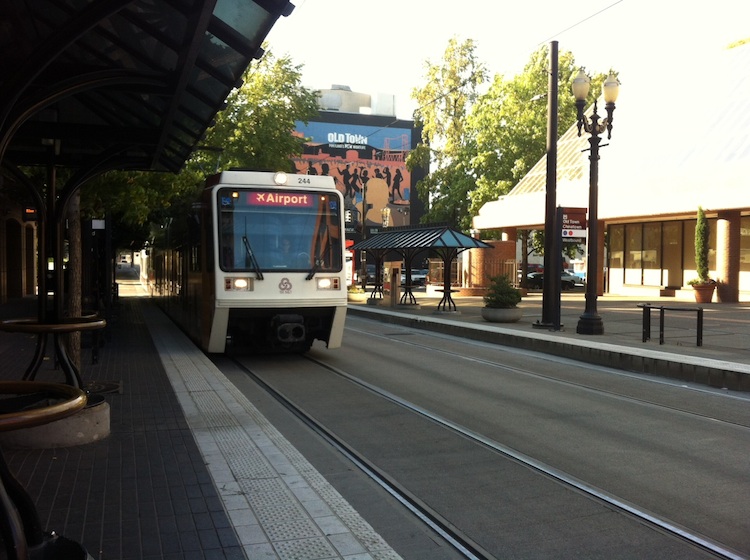 Why I Fell in Love with Portland, Part III

I’ve been telling you the tale of my love affair with Portland. Today I will tell the third and final part of the story. If you missed the first and second part, please go back and check them out.

The third part of my story coincides with my third day in Portland. As you’ve noticed from my constant complaining in the first two posts, I was not up for a third day of walking so I bit the bullet and decided to make my third day transit day. Thank God for Google Map’s transit option! 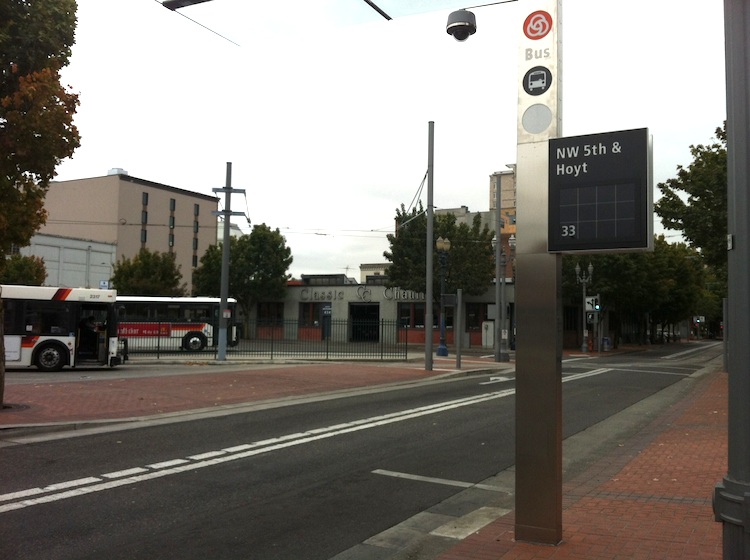 My first bus stop of the day.

So instead of walking to breakfast to Jam on Hawthorne, I took the Max Light Rail and then a bus. Turns out Portland had just changed the rules a week before allowing passengers to get a $5 all day pass allowing them to use any mode of transit all day including bus, light rail, or street car. Pretty sweet deal! 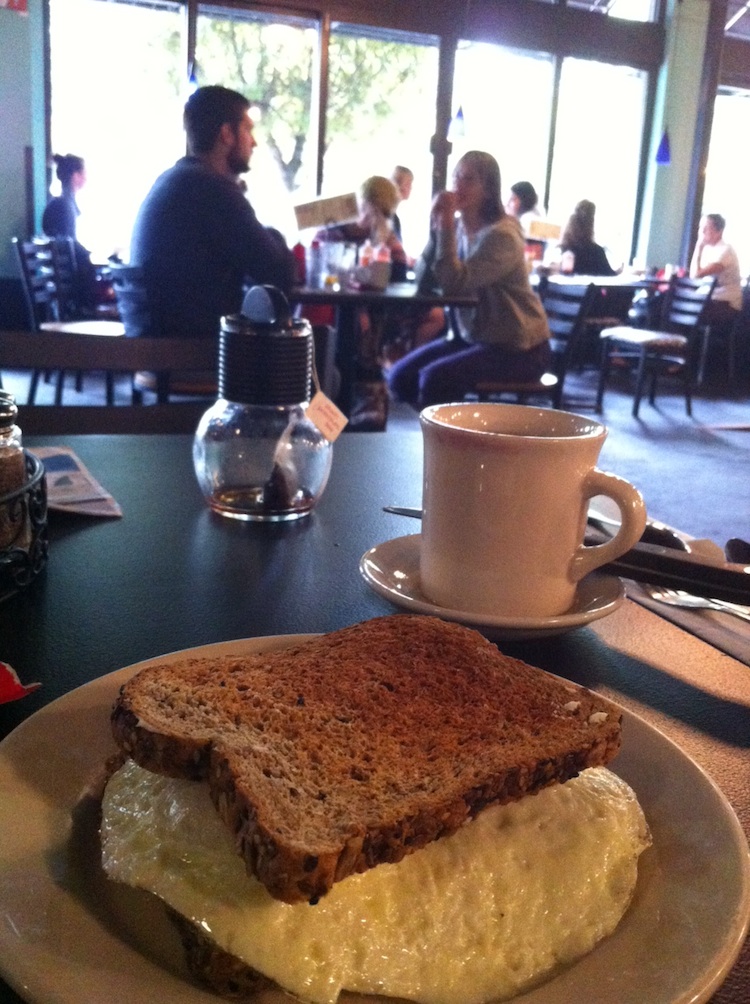 Jam on Hawthorne has delicious food and a delicious vibe.

My fears of using the transit system were unfounded. It was really easy and straightforward and a way better option than walking everywhere!

After breakfast, I walked up and down Hawthorne, then tried to get a seat at Fresh Pot (see Part II) to take a moment and write. I walked in and it was packed. No chance of finding a seat so I browsed the stacks at Powell’s bookstore next door, which whetted my appetite for my experience later that night. Undeterred in my quest to sit in a coffee shop, I walked further to find the next watering hole which I knew wouldn’t be far. Indeed I found the Common Grounds Coffee House which boasted coffee, tea, bakers and artists – all things I love.

After spending most of the morning and early afternoon in the Hawthorne neighborhood, I made my way back to downtown (on the 14 bus!) to meet a colleague who is an urbanist and placemaking expert in Portland. We met at the Starbucks (yes, I was dismayed he suggested a Starbucks, but I saw why later) at the Pioneer’s Courthouse Square. When I got there, I realized why he suggested this place. The square was a real life public space right in the middle of the city, and it was populated and vibrant like a piazza you would find in Europe. It was sunken, had steps, but unlike the Chase Tower Plaza, it was actually being used. That’s because it’s a vast, comfortable plaza actually dedicated as public space, instead of a sliver of sunken space around a skyscraper.  This Starbucks turned out to be the first Starbucks in Portland, and it’s location and siting overlooking the square was perfect. So I forgave my colleague. 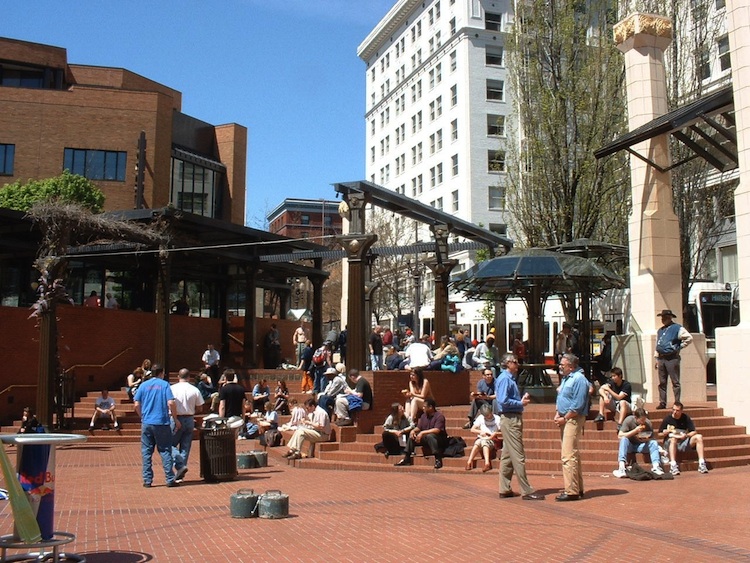 The Living Room Theaters, with its well-designed, modern interior, isn’t a huge multi-plex or anything. That night it was playing a handful of fun independent (but not too independent) movies like Sleepwalk with Me and Beasts of the Southern Wild. The movie I was in the mood to see, Arbitrage, wasn’t playing for another hour – a perfect amount of time for me to peak into Powell’s across the street and then grab a bite to eat at the restaurant portion of the Theater. (The Living Room Theaters is a lot like Filmbar Phoenix, but they serve food as well, which you can take inside the theater with you).

Going into Powell’s City of Books felt like the skies were opening up and the seas were parting. If you don’t know about it, this place is a multi-story bookstore that spans a whole city block. 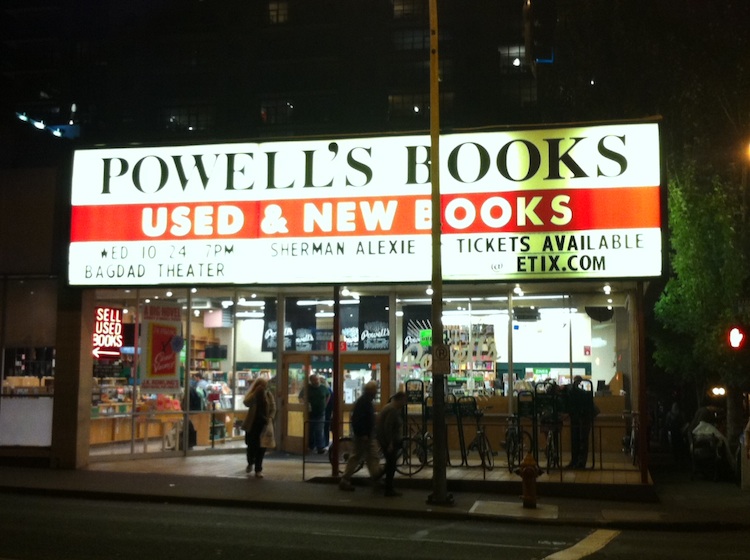 Powell’s looks unassuming from the outside…

I was warned that I might get lost in there and that there was a phone app that I could use to find my way out of the stacks if I did get lost. But Powell’s isn’t extraordinary just because of its size and the sheer number of books it houses. It’s also extraordinary because it still manages to exude the feeling of a small, cozy, independent bookstore with loads of charm and character. And the books! Since I only had less than an hour, I was only able to really browse a small section of the bookstore. I was bowled over by the amazing books that surrounded me. It was a real celebration of erudition, storytelling, storytellers, books, book lovers and everything else related. 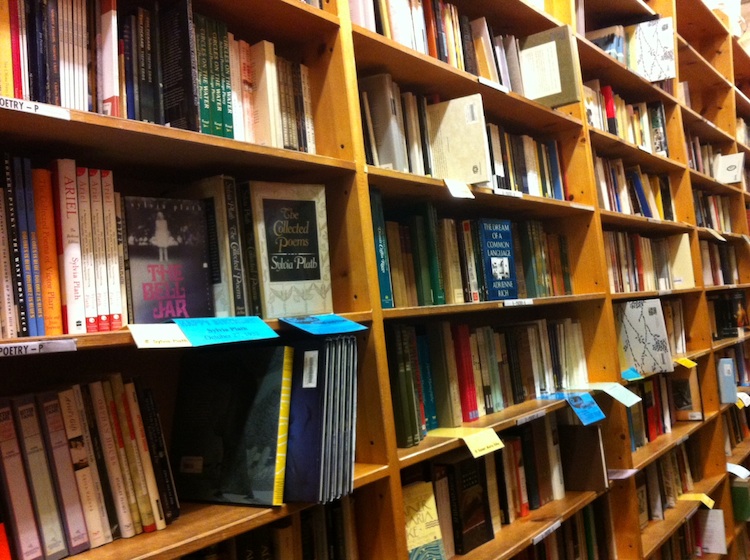 My transcendent experience wandering the stacks in Powell’s.

As it got closer to my movie time, I went over to Living Room and ordered some food. While I sat and ate, I asked the server how I should get home if the movie ran late and it was past midnight, not being sure that how late the buses and trains were running. He suggested I take a cab, but then also suggested I download the PDX Bus app on my iPhone. Too bad I downloaded this great app on my last day in Portland. It’s such an easy-to-use guide to using transit in Portland, with trip planners and devices telling you when the next bus or train is coming to a particular stop. I punched in my trip on the app, planning for a late end to the movie, and saw that the Max and the bus to my house ran well past midnight and I had nothing to worry about. I could still get home on my $5 all day pass!

The next morning I continued my transit trend and took the Max to the airport. It was easy and it dropped me off right at the terminal. My love for Portland was cemented by day three. I love the adjancencies there, where complimentary businesses are clustered together so you can hop from one thing to the other, like I did with the Living Room Theater and Powell’s City of Books. Just next to these two places are several restaurants, another perfect complimentary use to make people stick around and have fun without having to get back into their cars. I also love how things are open late in Portland to encourage people to be out and have things to do besides bar hopping. On this trip, I missed the happening music scene, which is also another cool element of Portland’s vibrant nightlife.

Portland is a city that most resembles some of my favorite European cities like London, Paris, and Barcelona. It has the same density and vibrancy as those cities. What it has that those cities don’t, however, is that it is an American city, one that is easily accessible to us Americans. It is one where everyone speaks my language, literally and figuratively. It is one where people share my American culture and my tree-hugging, book-loving, tea house-going, establishment-questioning, creative subculture. In a lot of ways I found my soul mate city on my trip to Portland. And just like other soul mates, I’m sure all its warts and imperfections will be revealed after the sheen of infatuation wears off and the reality of several visits sets in. But like with all other love affairs, I don’t care. I’m smitten and I want to find out more!

Photo Credit: All photos by the author unless noted otherwise in the caption.