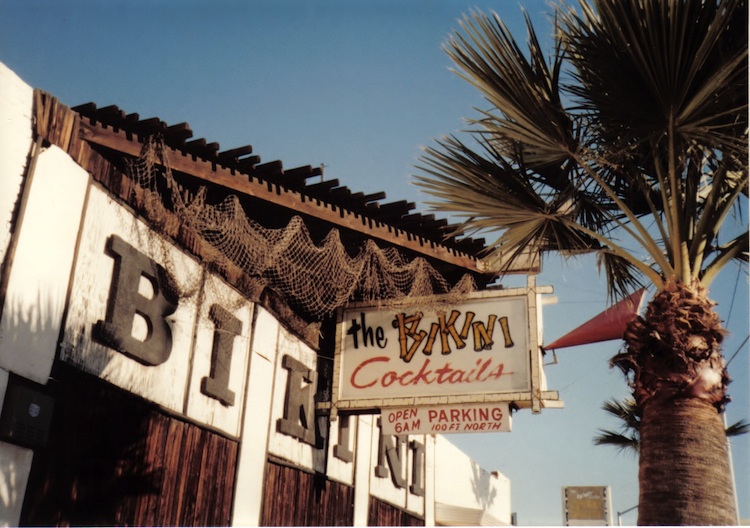 Today’s post is by Doug Towne as previously published in the Society for Commercial Archeology Journal. Doug is one of my favorite writers in town and when he wrote me an email that started with “I’ve decided you’re a nobody in this town until you’ve guest blogged on Blooming Rock,” I knew I had to publish one of Doug’s wonderful pieces.

An idyllic evening spent at the former Ward’s Motel on East Van Buren Street was, fittingly, the setting for Doug’s first overnight stay in Phoenix in 1986. Captivated by the dichotomy of the strip’s neon splendor and its challenging street environment, Doug began to study commercial archeology although he had no idea at the time that such a field existed. Doug is editor of the Society for Commercial Archeology Journal and Arizona Contractor and Community magazine. A former contributor to Phoenix New Times, Doug writes for Modern Phoenix, the Journal of Arizona History, and Phoenix Magazine, including the recent cover stories, “Phoenix in the 1920s” and “the Arizona Centennial.” Doug also enjoys creating works which incorporate roadside imagery; the resulting pieces are as much social commentary as they are homage to the past. His art has been featured at Modified Arts, Tempe Public Library, the Trunk Space, Tohono Chul Park, the Downtown YMCA, @ Central Gallery, and Braggs Pie Factory. A badminton enthusiast, Doug has won competitions in seven states and one national title.  He is honored to serve on the boards of the Rosson House, the Society for Commercial Archeology, the Arizona Badminton Club, Phoenix Fellowship for the Developing Arts, and the Phoenix Postwar Architecture Task Force. He lives in mid-town Phoenix with his lovely wife, Maureen, and two cats.

Phoenix is a city founded in a shroud of mystery—just what happened to that advanced Hohokam civilization that mysteriously disappeared from here around 1450 AD?  Named after the mythical Phoenix bird that sprang forth from its own pyre ashes, the city excels at impermanence, reconstructing itself—unfortunately—along ever more banal architectural styles.  In examining these different phases, it’s easier to tour prehistoric Hohokam ruins than to locate noteworthy remnants of the city’s 20th century commercial landscape. Ancient is cool, valued and—most importantly—marketable; simply being old is reason enough to call in the bulldozers.

This hotel is the ultimate conundrum. I call for reservations and the lady at the front desk hangs up. I appear in person and she ignores my requests for overnight accommodations. Yet strangely, I’m not offended—in her brusque way I suspect she’s doing me a favor. The New Windsor Hotel caters to the homeless and she probably doesn’t want the hassle of renting rooms to wanna-be hipsters who would only demand refunds once they saw the room’s condition.

Now comes the odd part—despite its targeted clientele, those down on their luck can hold their heads high. Their temporary home has the most evocative neon sign in town, which the owners spare no expense in maintaining. Approaching the hotel’s façade at dusk, you can’t help but be whisked back to the 1930s—imagine yourself clutching a valise containing all your worldly possessions, having just debarked from a steam-powered, streamlined Southern Pacific train for a new life in Phoenix. 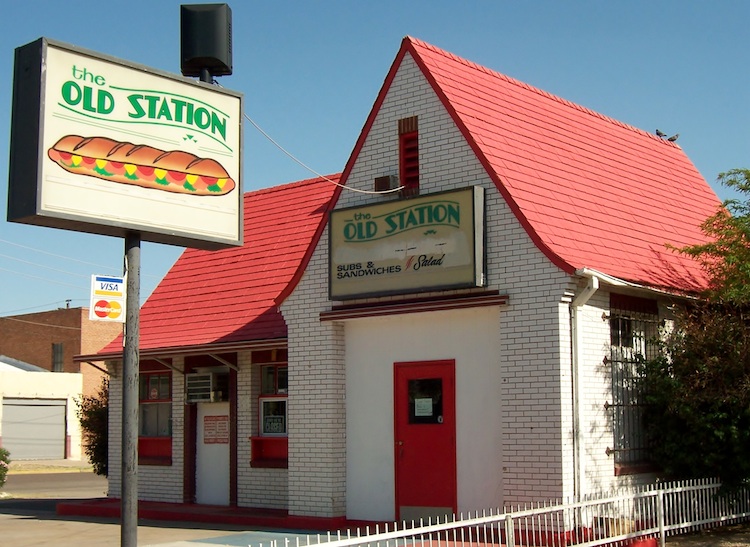 Ecological principles that govern nature also have their application in the business world. In a restaurant industry dominated by generalists (i.e. Subway), the Old Station Sub Shop is a specialist, cleverly locating its niche in a former Mobil gas station built in 1926 that is sandwiched between Phoenix’s Pioneer Cemetery and the Arizona State Government complex. During the day, its bays are filled with daring bureaucrats adventuring beyond the comfort of institutional cafeterias. When the offices lock their doors, activity ceases in the neighborhood, creating a habitat that dissuades any sandwich conglomerate from infringing on the Old Station’s turf. Long may they slather on the mustard!

Looking to wedge into a spot at a bar, say, between a filmmaker who has just released the hobo art documentary, Who Is Bozo Texino? (great flick for train buffs!) and a slightly eccentric—change that to crazy—lady missing the majority of her teeth? This Tiki palace, opened in 1947 by a serviceman returning from the South Pacific, is a good bet—at least it worked for me. A dive bar, the Bikini has newfound popularity, as many of the nearby empty storefronts have been transformed into art spaces. This is the best, and perhaps only acceptable form of urban renewal: lots of energetic individuals with passionate dreams readapting historic structures to create a synergistic experience that is more than the sum of its parts…something no planned development has equaled.

This animated, set-on-end, boomerang-on-steroids sign looks as good as the day it rolled out of the factory back in 1957. Driving by this advertisement in the right frame of mind, your compact, fuel-efficient vehicle—however briefly—morphs into a vintage, high-powered machine able to take anything on the strip. Enjoy the ride! 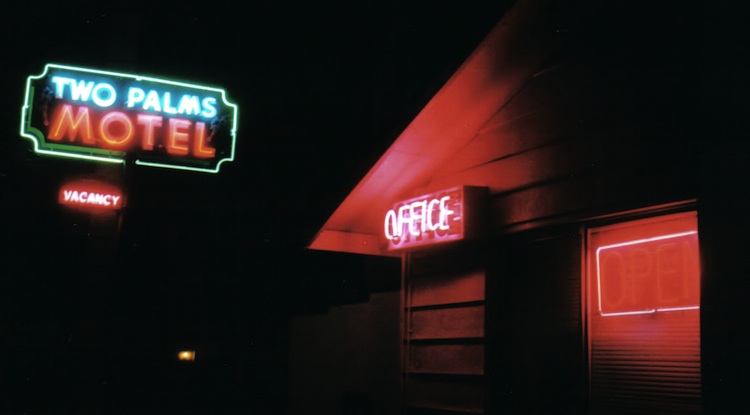 Used to be you couldn’t swing a dead cat in Phoenix without hitting a vintage neon beacon garishly announcing the presence of a roadside motel. Nowadays, the modest advertisement at the Two Palms Motel is the best Phoenix can offer—even though it’s located just beyond the city limits, in Glendale. I pass the sign like clockwork around midnight every Tuesday night, convinced the sight of its neon glow adds luster to my unconscious palette. 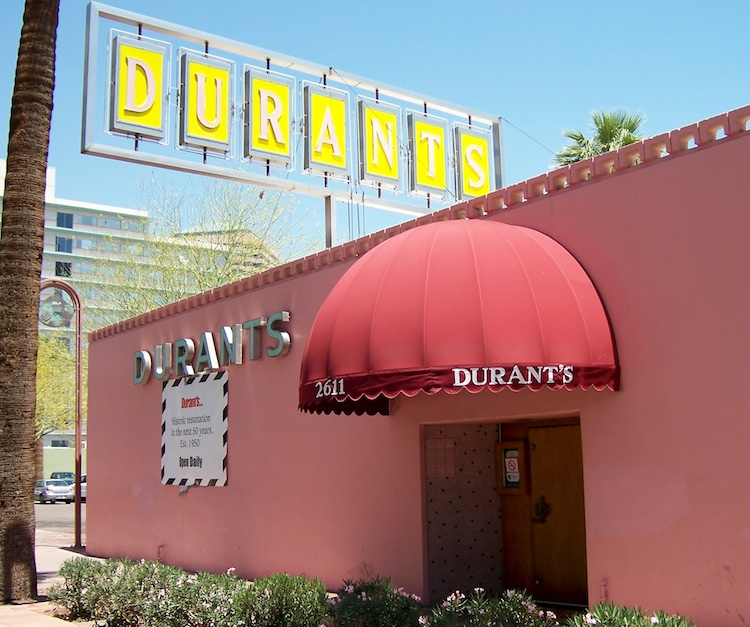 If you’re looking for the spirits of Frank, Dean, Sammy and the rest of the gang—or simply good spirits—visiting this 1950s-era establishment with its dimly-lit, red velvet-paneled décor is a must. Decorum requires that you bypass the front door and suavely enter through the kitchen, situate yourself at the bar and start your séance with the assistance of some almost forgotten classic concoction, such as a Dubonnet Cocktail. Cheers!

Photo credit: All photos courtesy of the author.

This article was previously published in the Society for Commercial Archeology Journal Summer 2007 issue.