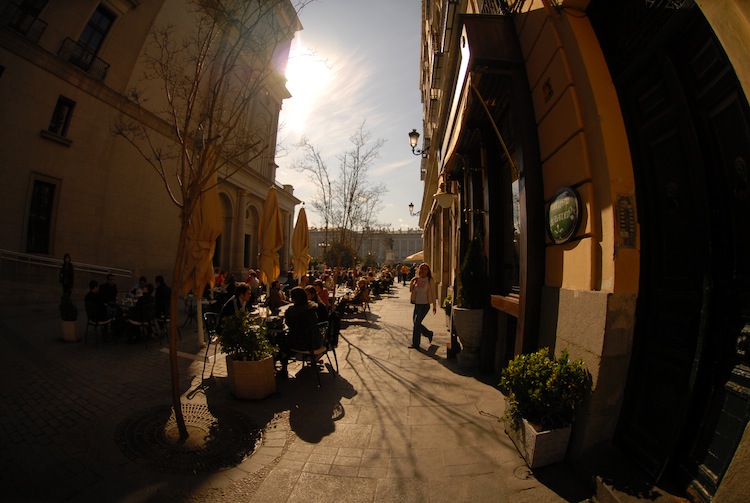 Cafe Culture Doesn’t Kill: A Simple Proposal for Beer in the Commons

I swear that I left my sanity somewhere between the zoo that is JFK and lush curves of Madrid’s Barajas Airport.

The building oscillated in my bleary-eyed state, leaving me confused as I walked out into the brisk March morning. I looked like a fat punching bag dressed in a Michelin Man costume. Or maybe I felt like one. I don’t remember the details exactly, except that I was travelling as a third wheel with two newlyweds – my best friend and his new wife. Someone with more sanity would steer clear of such a traveling fiasco, but I needed the change of scenery, for no other reason than to avoid the mess that I was for a brief period.

Jet lag and narcissistic self-avoidance were not a winning combination that morning. I desperately needed a corrective tonic, but it was too early in the day. I would have to settle for a cortadito until I could figure out my bearings. At least until lunch. After navigating the public transit system into town and dropping our bags off at our hotel, we wandered through a Madrid morning which continued to overwhelm my senses. The crisp air convinced me that it was fall in New England, while the smells coming out of the panaderías argued that I was either in Mexico City or South Phoenix.

Eventually we wound our way to El Botín, reputed to be the oldest continuously operating restaurant in the world. I was in no shape to argue the claim, but I will defy any one to find a suckling pig capable of competing with my lunch that day. Working and reworking a recipe over the course of three centuries will give an establishment a decent head start. Even if my body thought it was still stateside, my taste buds figured that out pretty quickly. Satisfied and delighted at a meal I was not expecting, the newlyweds and I took off on a postprandial stroll from the Plaza Mayor to the gardens of the Palacio Real. Fighting to stay awake, I lost myself taking photos of the couple until we stumbled upon a plazuela near the Teatro Real.

While traditional plazas can be enormous, if not overwhelming, like the Zocalo in Mexico City’s Centro Historico, the plazuela in front of us was intimately scaled.  A dozen or so tables were scattered across the terminus of a street that was thirty feet wide, eventually giving way to the formal space of the Plaza de Oriente.  The architectural grandeur of the space was lost to my sleep deprived mania.  Its tables drew me in, however.  They reminded me of hours spent in sophomoric undergraduate conversations outside the Harvard Square Au Bon Pain.  Fueled by coffee and cheap cigarettes, those discussions almost always ended with an elegant resolution of a day’s problems, whether academic or real.

That afternoon I still had problems. And those tables were ready to solve some problems. But instead of fueling potential solutions with a caffeinated accelerant, I could drown my problems with a beer. Or four.

So I sat down and began looking for a solution.  With a beer, of course.

While my problems that day amounted to little more than jet lagged lovesickness, the conversation that unfolded took a distinctly different arc than it might have had it been fueled by caffeine. That it took place outside, in a space that blurred the lines between public and private, tempered the potential for any ugly descent into public drunkenness. The plazuela’s activity, composed in part by the bustle of daily Madrileño life and the chatter of tourists, lulled me into a minor reverie which allowed my soul to temporarily smooth out its rough edges.

I can still taste that beer and feel the chill of that afternoon.  It was an experience that is anathema to Phoenix largely because of laws and policies that reflect outdated social mores, but it is familiar to any traveller that has been to Europe. That I could drink outside, in a public right of way, was itself a recognition that social mores themselves are often better at policing individual behavior than public policy.

In Arizona we imagine ourselves as being a bunch of libertarians, free of a nanny state.  But then nonsensical policies that infantilize the public trip us up, treating adults as if we require perennial supervision.

Why not let adults be adults?  Why shouldn’t we be able to have a beer on a sidewalk?  Sure, we have some bars with great restaurants and patios throughout the state, but I am talking about something downright radical: restaurants, bars and cafes should be able to serve alcohol to patrons seated within public right of way.

I am not proposing anything too crazy.

After all, the idea is predicated on the availability of adequate pedestrian infrastructure, and most of us know that is non-existent in a good chunk of metropolitan Phoenix.  But let’s start where there is infrastructure – or at least right-of-way: downtown Phoenix.  It is entirely reasonable that we can adopt a policy mechanism which fosters a café culture in a small geography as an inducement for restaurateurs and barkeeps to ply their trade downtown.  Limiting such a policy to, say, specific areas within the Downtown Redevelopment Area, constrains supply and increases the potential value of downtown as a dining and entertainment destination which emphasizes pedestrian livability.  And it makes enforcement a manageable proposition.

Of course, the City mothers and fathers would still have to figure out how to handle liability problems.  But frankly, that is one of the chief reasons municipal governance exists – remember that professional public safety departments were created centuries ago when insurance companies realized they were ill designed to profitably handle certain common problems, like fire. Fortunately, managing the risk and liability associated with outdoor alcohol service in public right-of-way is easier in Phoenix than in many other cities: we’re self insured.

I’m ready to have a glass of cava outside now, thank you.

Let’s go find the folks in the City’s Risk Management Department and bring them a glass or two.  Maybe we might make this place a little more livable (and attractive) after a bottle.