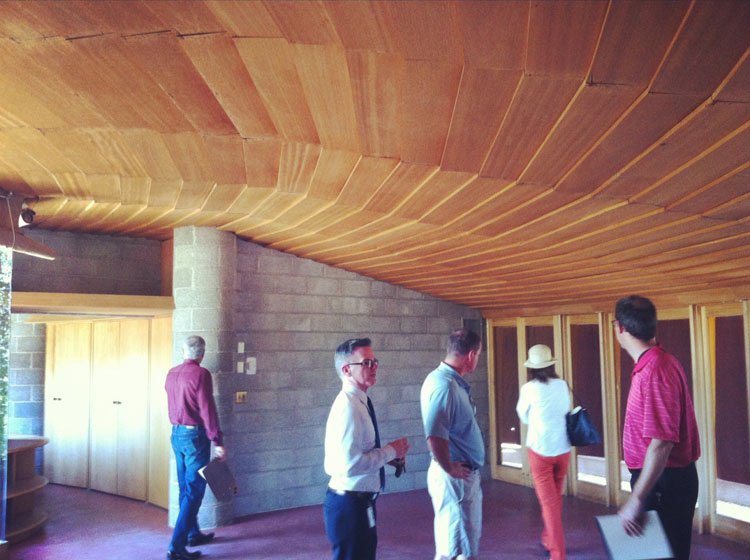 There has been a lot of talk about the David Wright House as of late. You may even be sick of hearing about it. But the battle to save it is far from over. Yesterday I had the privilege of going to tour the house which I had heard was in quite a state of disrepair.

But our tour proved otherwise. Many of us remarked at how well the house has withstood its 61 years and how it remains in great condition. The new owner, John Hoffman, who is the center of what I’m sure is some unwanted attention, graciously led the tour starting with the exterior of the building. He walked us through a low entranceway that frames the beautiful and unusual house. 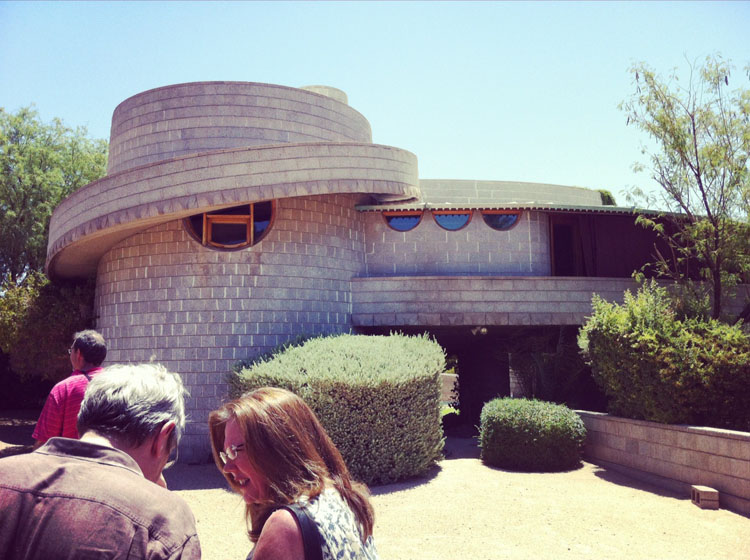 Many people on the tour, including architects, real estate professionals, a structural engineer, and local preservation advocates, had never seen the building in person. We were all awe-struck by it.

You may have seen some photos of the David Wright House in my recent articles. It photographs really well, but even those photographs don’t fully capture the true experience of this masterful architectural work.

It is a very strange shape for a house – round, and designed to wrap around the fireplace in the living room. 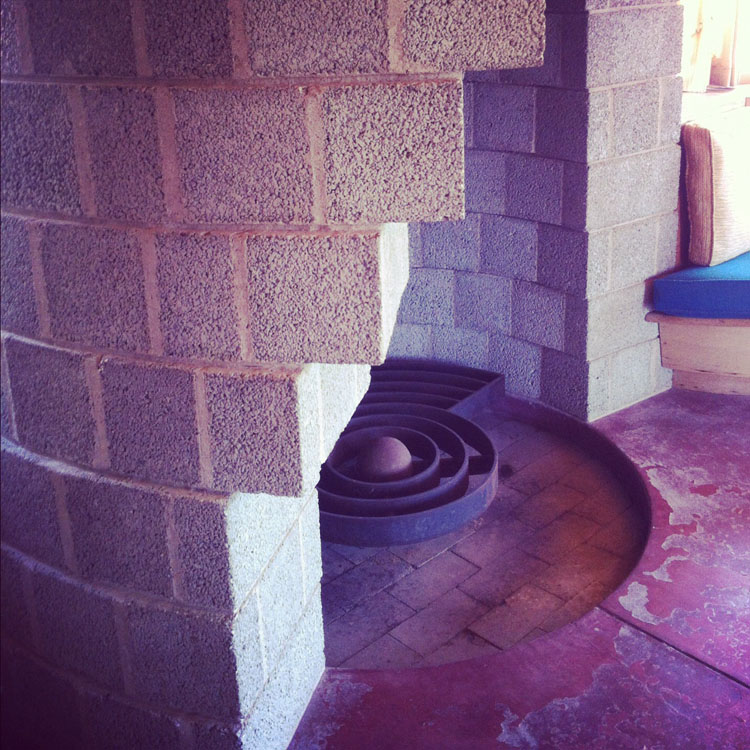 At the risk of sounding simplistic, it reminded me a little bit of a cinnamon bun, which is sort of rolled into a cylinder by wrapping a a rectangular piece of dough around itself. The David Wright House feels as if a masonry wall wraps around itself achieving very singular but pleasant spaces in between. This circular house was a precursor to Wright’s ultimate round building – the Guggenheim Museum in New York City.

Besides the shape of the house, it’s material is the second most striking thing about it. It is made of this beautiful block, which was custom made, according to Taliesen professor and architect Frank Henry by the Besser Block Company, in which David Wright was a sales representative. This block, made of a dry mix, is very grainy and rough.

And the way it is laid, with beautiful attention to details drawn by Frank Lloyd Wright, such as staggered stacking to create shadows, is a work of art. Henry told me that the masonry was laid by only one person and he wasn’t even a mason by profession. He was a pilot who laid masonry as an avocation. 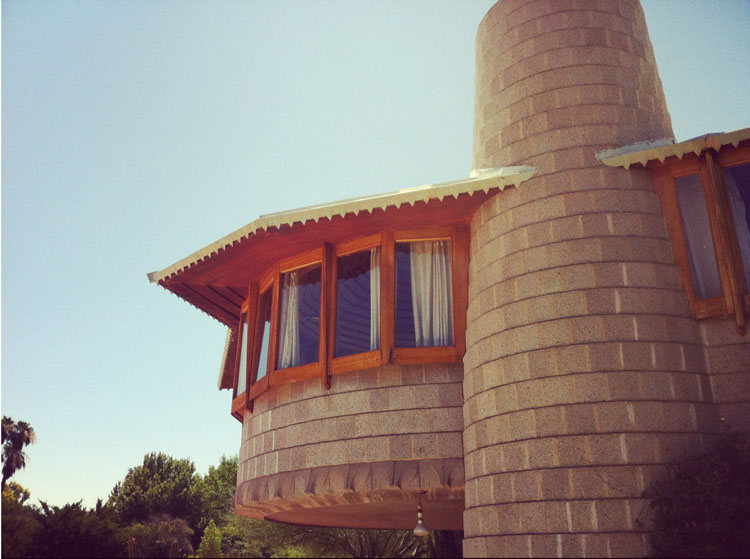 Hoffman walked us through the pool and the front yard and up the ramp all the way to the roof, where you could see the delicious center of the cinnamon bun, the top of the chimney. 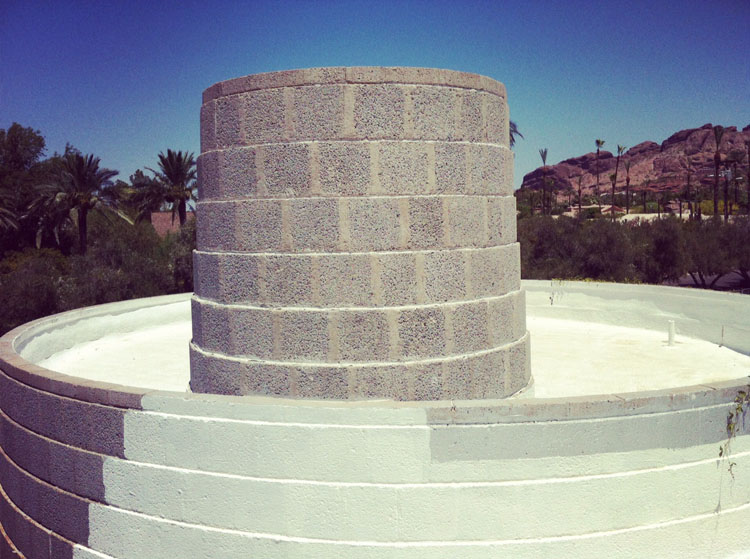 But my favorite part of the tour was yet to come.

I had seen and posted photographs of the stunning interior of the house, which has, hands down, the best ceiling I have ever seen in any building. This Philippine mahogany ceiling was constructed by two talented craftsman according to Henry. And it’s staggered rhythmic beauty swirls throughout the house, even in the bathrooms, adding a sense of continuity and warmth in every part of the house. 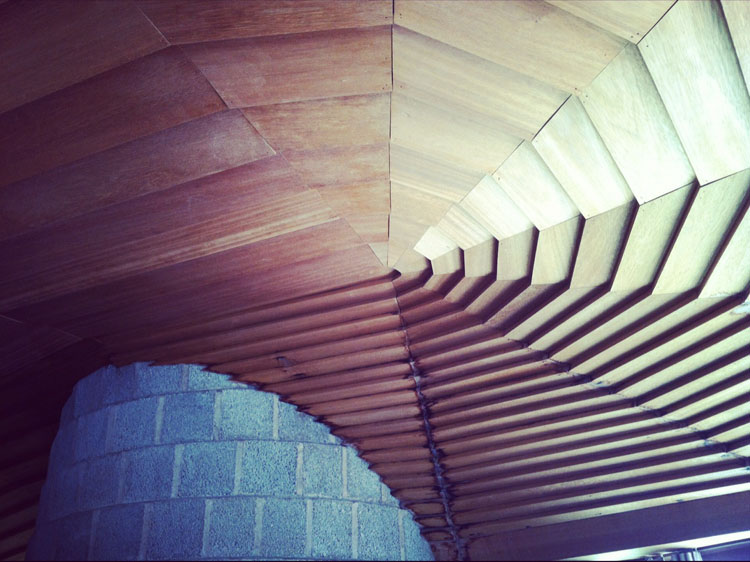 The extremely simple palette of materials in the David Wright House – mahogany wood, exposed concrete block, and glass is part of its genius and of course very fitting with the dessert. I believe this simple and well-put-together palette of materials is the reason why this house is in such good shape today. 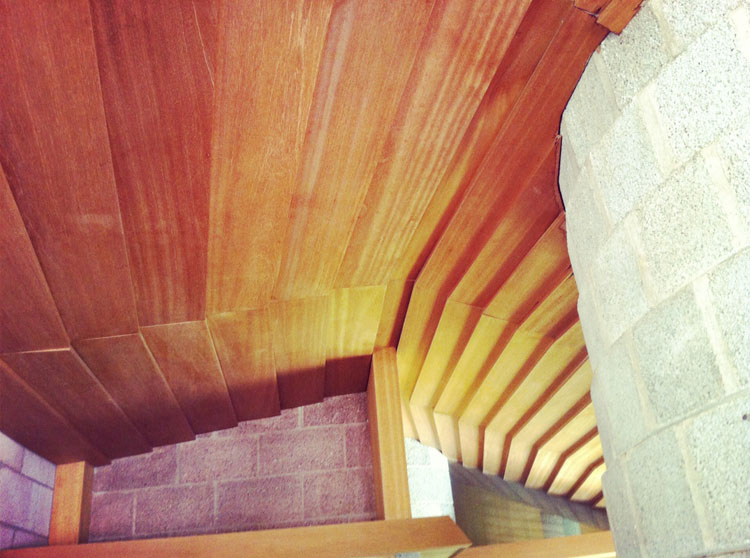 After having seen the David Wright House in person, I can confirm that it is an architectural masterpiece designed by one of the greatest architects the world has ever seen. Will Bruder, who was also on the tour, remarked that Frank Lloyd Wright was at the top of his game when he designed the house. Even in its current condition, it surpasses many of the house museums I have seen traveling the world and it very much deserves to be among their ranks.

Currently, there are talks with the new owner, 8081 Meridian Real Estate Development, on options of how this house can be saved from demolition that at the same time accommodate the company’s prerogative to make money on their investment. Though we are not out of the woods yet, there is good reason for hope that this magnificent piece of architecture will remain in tact as part of Arizona’s culture heritage for some time to come.