The Good and Bad of 7th Avenue and McDowell

As a new resident of the Willo neighborhood I’ve been closely following the new developments on the corner of 7th Avenue and McDowell Rd.  A few years back the corner was mostly dead with the only sign of life being My Florist Café and a few other shops barely hanging on. Today, the corner is being revitalized but not without much outcry from certain sections of the community. So lets look at what is good and bad about the corner.

The corner is undoubtedly more alive than it’s been in anyone’s recent memory. Every time I go to the corner there are people dining outdoors with friends and family. Even more exciting, outside of ZoYo frozen yogurt I often see families with children! The importance of this cannot be over stated. Our historic neighborhoods were once much higher density as the homes were filled with families who had children. Today they’re often filled with empty nesters or young childless couples like my girlfriend and me. The fact that Central Phoenix may be starting to attract more families with children is a great sign our center city is again being seen as a viable, and more importantly, safe, place for families. Any corner that’s safe and convenient enough for a family to walk/bike there with their kids gets points in my book.

The notion that the corner is merely a “Fast Food Dump” with only national chains has been dramatically overblown. In fact, when one stops to count the retail establishment currently at the corner or opening soon you’ll find almost an exact 50/50 split between locally owned business and regional/national chains.  Often times folks in Central Phoenix seem to have the bizarre belief that 100% of businesses should be some kind of super chic local boutique that appeals only to bohemian types. Great urban areas have something for everyone, from urban hipsters to suburban grandparents. 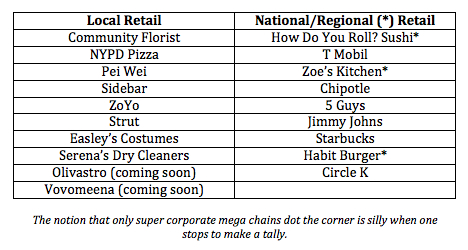 When I lived in Boston the nearest urban retail center to me was “Cleveland Circle” (which is not a circle, nor in Cleveland) and it had a similar split between local and national businesses. Cleveland Circle had an Applebee’s, a Starbucks, a Verizon Store, CVS and a Chipotle. But it also had two nearly identical local pizza places (so lets not worry about two burger joints, please), a frozen yogurt place, a local bar, et cetera. The insinuation that a neighborhood center isn’t good if it has an equal blend of national and local outlets rings empty to anyone who’s travelled the country. In fact, the national chains at 7th Ave and McDowell will likely serve as anchors for the local shops (ask CityNorth and the Galleria how anchor-less shopping areas work).  I, for one, long for the day when more national chains call Central Phoenix home, wouldn’t it be nice to have a REI, Kohl’s, Target, etc. within biking distance?

Another positive is that the urban form of the corner has also improved, mostly thanks to the developers and not the City. The weird off street diagonal parking that once lined the corner has been done away with and today pedestrians can enjoy wide sidewalks, new trees and street side dining.

The corner, like many burgeoning neighborhood centers throughout the Valley lacks an identity in part because it lacks a name. Saying “7th Avenue and McDowell” every time one wants to refer to the corner is a bit soulless; too many places in Phoenix are reduced to their intersection. Though the name “Cleveland Circle” may have seemed unbefitting my polygonal neighborhood in Boston at least it had a name and thus an identity. The City of Phoenix should work with the developers and neighborhoods to more properly brand and identify this corner. The corner doesn’t need to be named anything fancy or complicated, “McDowell Square” or something of the like would be just fine.

The corner is a place where four great historic neighborhoods meet but one passing by would never know it. While the corner isn’t ‘in’ any of the historic ‘hoods, it is where they meet and that should be noted. Each corner would benefit from a vertical/obelisk shaped piece of public art that proudly boasted the names of the individual neighborhoods.

The buildings along the southeast side of the corner have rightfully upset a lot of folks.  While the north side proudly boasts its original brick exterior, the developers of the southern side of the street slathered stucco on their buildings, greatly harming their historic integrity.  The loss of the brick façade was disappointing, but at least some of the tenants have kept their exposed beam ceilings. In the future, the City needs to come up with a Facade Restoration program like Tucson has and we as citizens need to push even more for maintaining buildings charm and character. Additionally, the trees planted on the South side of the road are too few and of a minimally shade bearing type. Hopefully, if the businesses succeed the landlords will pony up the cash to improve the shade in the area or it’ll be a blistering walk in the summer.

While the developers have improved the urban form of the corner the City and its car loving traffic engineers have done it no favors. 7th Avenue remains a mini highway with cars barreling off the I-10 at 50 MPH+. McDowell Road could also stand to be narrowed, slowed and have bike lanes added to it. Unfortunately, that sort of thing is out of the developer’s hands and is a topic for another day.

Are there disappointing things about the new development at 7th Ave and McDowell? Sure. Is the corner a lot better off than it was five years ago? Absolutely.  Would it be nice if there were a few more local, unique places to shop and dine? Yes, but there’s still empty spaces on each side of the road, so there is hope. I hope Central Phoenicians won’t just write the corner off because it’s not perfect, because if that’s our attitude, we might as well just write off the whole City.

Photo Credit: Photo and image by the author.

Tags: 7th Avenue and McDowell, fast food chains, local businesses, phoenix, Will Novak, Willo neighborhood
« Shade. Or, how I gave up and admitted my secret love affair with Arcadia  |  “Just Do It” Urbanism »