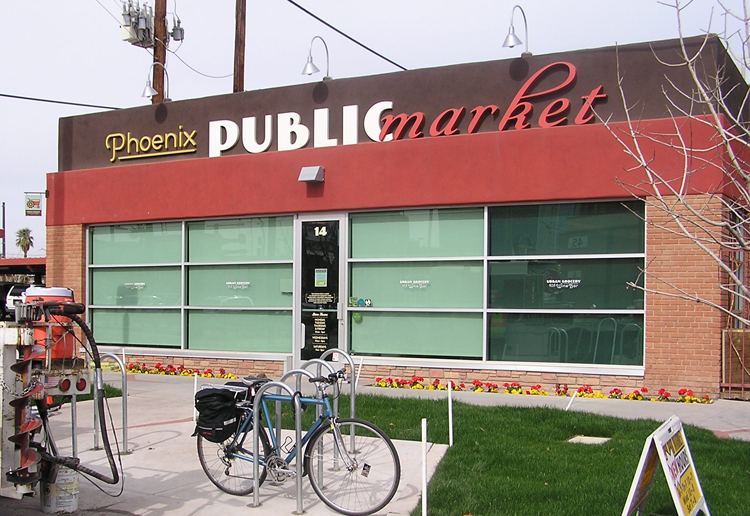 “We should hold a wake, y’know.  I mean, the body is still warm and everything.  May help with closure,” read the text from my friend.

Word about the closure of the Urban Grocery and Wine Bar at the Downtown Phoenix Public Market spread like wildfire last Friday.  Occupying nearly every casual conversation I had over the weekend, the news nearly derailed work originally scheduled for the week – how do we save the market?  What happened?  Who was to blame?

I never pretended to have the answers, other than to say consistently that it looked more like a tragedy of poor communications and a minor bit of mismanagement rather than anything malicious.  The Urban Grocery was created to fill a real need for fresh food and produce downtown.  The last market that existed in the downtown core was a Bayless, located on Roosevelt between 3rd and 5th Streets, and had burned down before it could ever leave an imprint on my memory.

When the Urban Grocery opened two years ago, it meant that I had groceries available within walking distance of home.  Perhaps more importantly, it represented a bold departure from conventional retailing models.  Ask any retail real estate broker why we have never been able to attract a market downtown, and they will all respond with the same answer – not enough rooftops.  Anchored to GIS-driven catchment areas that provide easy, formulaic locational solutions, way too many communities have been left without access to the basics required for everyday living, including downtown.

What the Urban Grocery proposed was nothing short of an audacious idea.  It proposed that a grocery store embed a set of social values into its operational model, and support local farmers and merchants while facilitating the growth of a local economy.  If there was a defect in its business model, it was probably the same defect that triggered the community outcry at its closure: its potential customers had to seek it out.  We weren’t beaten over the head with spam emails, loyalty cards, or junk snail mail telling us about its latest specials.  We didn’t even get a local version of the “Fearless Flyer” to tell us what was in season.  It relied on our goodwill to support it as an enterprise.

This setback has as much to do with the inertia of our own habits as it does with the Urban Grocery’s marketing.  But if we are to resign ourselves that the idea cannot succeed, then we run the risk of giving up on a broader enterprise.  We run the risk of resigning ourselves to the commodification of community that seems to underlie most critiques of places like CityScape – and yes, I have my own personal nickname for that place.

I propose that we take a hard look at the business case for a grocery downtown – because it is there.  We need to analyze the operational deficiencies and successes of the Urban Grocery model, adapt, and overcome.  Because we should all remember that downtown Phoenix was the sole bright spot for retailers throughout the recession – receipts grew downtown while collapsing everywhere else.

Besides, getting scraped up a bit is part of the learning process.  After all, part of being sustainable is being able to pay the bills and make a bit of money in the process.