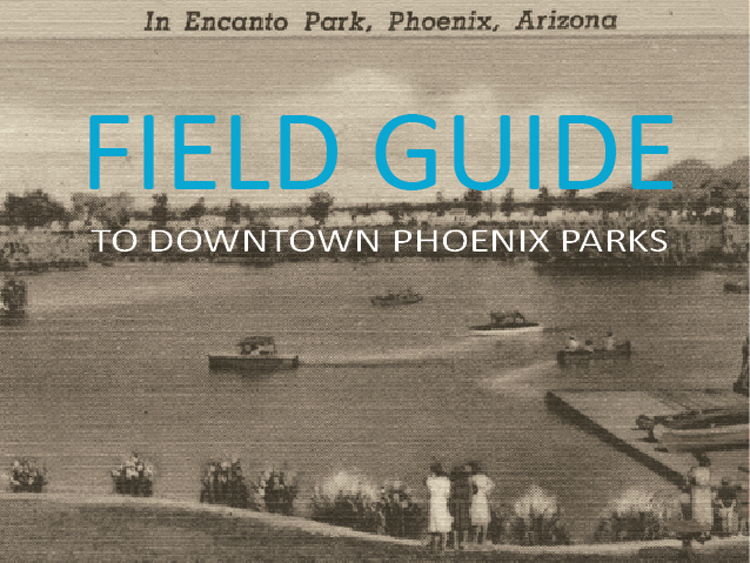 A Field Guide to Activating Place

A while back I was asked to present at the Phoenix Urban Research Lab (PURL) during the Phoenix Urban Design Week at an event called “PURL Jam” wherein 20 slides were to be shown each with a 20 second time limit. The topic was “Activating Space.” After procrastinating for weeks as I usually do, I finally came upon an idea I thought worthy of 400 seconds of the audiences’ time.
The concept was based on one of my favorite contemporary artists, Mark Dion. I’d seen one of his pieces a few years ago at the Tate Modern in London and his work strongly resonated with me as an artist and urban designer. That particular piece was as much about process as it was about product. The piece was about the amazing amount of material he excavated from the Thames River during the renovation of the Tate. He collected, cataloged, cleaned, curated and presented the materials in a series of Wünderkammer (Curiosity cabinets). I was enamored.

In some of his other work, he created field guides to assist in the didactic undertakings of his work and the places where they were located. For my presentation I emulated some of the process and decided to do some field work where I could discuss and describe several of the public spaces in downtown Phoenix in a field guide of my own. The purpose was to present the work, provide the field guides to the audience members, and have them activate the spaces by going to the places in the guide and experiencing the parks for themselves.

What I found from this exercise was that from the many parks listed, I had not been to over half of them. So for me it was purely an opportunity to educate myself on my own city. Not only that but I realized when I did the mapping exercise to locate the parks that there were a number of commercial places I had visited that were extremely close to these public spaces. Coffee houses, restaurants, etc.
I spent a Tuesday afternoon visiting and photographing 18 parks. I made notes about what was remarkable about each one, their context within their neighborhoods, the program elements they possessed, how busy they were (not many were), and their general condition. I took this information and created my book entitled “Field Guide to Downtown Phoenix Parks.”

As you may have guessed, the book is exactly 20 pages in length, including the cover and park directory. Essentially this means at PURL Jam I presented a book, not a slide show. And I handed out a copy to each of the audience members after the presentation. What I learned from this was how often we take for granted places that exist in our own backyards that we fail to acknowledge by visitation. I’ve traveled half-way around the world to visit parks, plazas and buildings, yet haven’t broached the extra two blocks to see a park in my city.

Not only did the presentation discuss the parks, it charged the audience with the operation of visiting and activation. After the presentation I was asked about the potential for commercial venues within some of these parks. As far as I know, Phoenix does not go there because of the potential conflict with private business. In other cities as well as Europe, it’s common to find hot dog vendors, snack kiosks and other small enterprises. As William Whyte mentioned years ago in his book and film “The Social Life of Small Urban Spaces,” food is an important element in the triangulation of public space. I agree and believe in the integration of food kiosks (even alcohol) within public spaces, especially in Phoenix.

Why? Because our climate is conducive to people living in outdoor rooms most of the year. Our public spaces only operate if they are social spaces. On any given day I can go to a local java joint, Lux on Central Avenue, and it has more patrons than the 75-acre public park across the street. What if the City allowed Lux to open a small satellite kiosk in the park? Wouldn’t that help activate the space and offer what many people probably want in the first place? 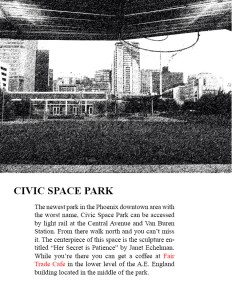 A good example of integration is the Fair Trade Café located within the new Civic Space Park (terrible name by the way). Visitors can buy a coffee or beverage and take it into the park or sit in their outdoor plaza. They’ve recently been permitted to allow alcohol for special events within the building they’re in, but not for everyday sales. Too bad. I would love to sit in the park after work and have a nice Ironwood Porter from the Phoenix Ale Brewery (all of the beverages and food should be as local as possible).

The important thing to understand from all this is the lack of activation renders these spaces useless, and therefore erodes our abundance and quality of urban public space. A good example is Woodland Parkway between 9th and 15th Avenues on Van Buren. The remnant of a 1913 Beaux Arts designed neighborhood, the 70-foot wide park is closed because of transients. It has “No Trespassing” signs posted yet is still maintained for its visual appearance. In that case, it’s best to go across the street and eat at Cisco’s and look at the park from there.

In addition to including food in our parks, why not incorporate active programming, such as musical entertainment? I understand that Patriot’s Park, before it became an outdoor homeless shelter, used to be quite popular when the City of Phoenix sponsored events in it throughout the week. Can’t we citizens take ownership and pay for/and or host some of these events? Can these spaces be leased for functions that would allow the City to increase its funding for special events and maintenance?

Public urban spaces don’t get activated by the “if you build it they will come” mentality. They require special care and feeding, frequent diaper changes, and tender-loving care. Too often we take for granted these spaces, even their mere existence, like I did. But for me, the realization was “why would I go here?” That’s really the key question. Creating the field guide helped me understand which of the parks I would frequent and sorted out the others that I won’t. Civic Center Park is my “local” park because of the program elements it offers, primarily the coffee shop and the proximity to my studio. For others, the open grassy expanses and playgrounds are the things they go for.

In any case, we need to support our public places and use them to our benefit. Go out and explore your local parks. See what’s there and how you can be a part of the public realm experience.

You can find the Field Guide to Downtown Phoenix Parks here for your viewing pleasure.