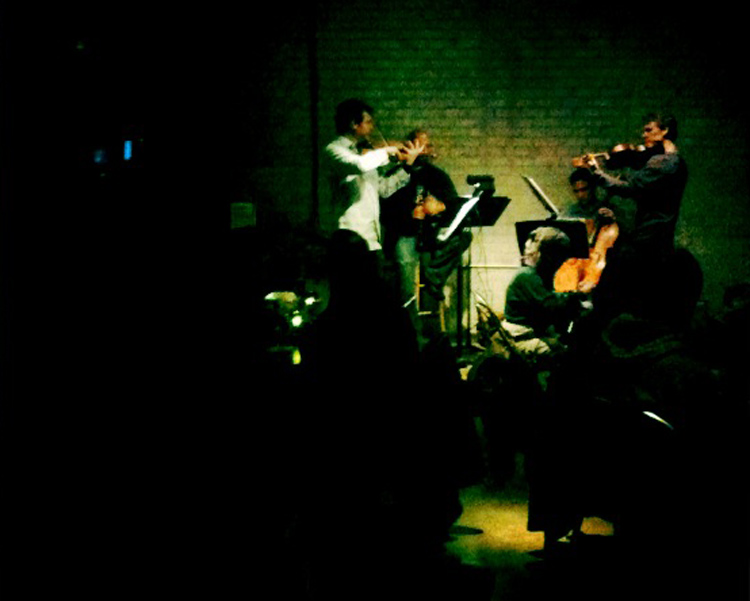 The Crescent Ballroom: A Minor Musical Fairytale set in the PHX

The timbero ferociously punched out a backbeat with an intensity I had not seen since watching Tito Puente at the Regattabar. While Tito was famously expressive, mugging and goofing around just for grins, tonight was pure business, and what little attention was paid to the beat was by the dancers.

Competing pairs of hipster girls swayed in front of either end of the stage, while a crowd of academics straight out of a Nineties-era Benetton ad anchored the center with their ballroom moves. Standing a full head above me, just beyond the dancers, my friend Garrett grooved in a way that betrayed an enthusiasm for the rhythm underneath his baseball cap and prep attire.

Attempting a bit of observational detachment, I kept thinking to myself that the alchemy of Charlie Levy’s Crescent Ballroom might be the right mix of tonic and poison for the collective soul of Phoenix. Tonight reinforces my suspicions, with the crowd cutting across every demographic pigeonhole one could possibly imagine, united by a common animus of passion and joy. People were here to get their groove on, whether on the dance floor, in the crowd, or elsewhere after the music ended.

Watching the assembled masses drink in the night’s music, a raucous fusion of funk and soul with more traditional Latin cumbia, salsa, and merengue, I imagined that my perfect Phoenix might look like the Crescent, writ large. Pulsing with energy that attenuates to the combined needs of musician and aficionado alike on any given night, the Crescent propels its patrons into new possibilities. Sometimes musical, sometimes romantic, sometimes business – always creative, the Crescent’s possibilities extend an exuberant middle digit to the culture of fear Arizona seems to have been exporting for the last several years.

Call it a gross failure of imagination on my part, but this place would not fly in Fountain Thrills, even if Charlie Levy were to arrange for an impromptu Paul Anka/Chris Cornell concert. The kids might come out to see Paul Anka, but the more sedate and settled denizens of Phoenix’s hinterlands might not be too thrilled about the mash-up. Tucked away on 2nd Avenue and Van Buren, its downtown location means you have to work a bit to find it – especially if you are in a car and used to finding a sea of parking.  But that’s part of its allure.  You have to want to go, or at least be open to listening to the acts booked for any given evening.

As the night evolves, I wind up on the dance floor, engaged in a conversation that winds its way from Bell Hooks to Antonio Gramsci and back to the Bikini Lounge, pretty much leaving me breathless and blown away – especially because there was no alcohol involved.  So my mind wanders, naturally, to Joseph Schumpeter’s Capitalism, Socialism, and Democracy:

The opening up of new markets . . . illustrate the same process of industrial mutation – if I may use that biological term – that incessantly revolutionizes the economic structure from within, incessantly destroying the old one, incessantly creating a new one. This process of Creative Destruction is the essential fact about capitalism.

The huddled masses at the foot of the stage on any given night are hell bent on destroying the idea that Phoenix is a desert where people come to die.  An oasis of creativity and joy, the Crescent Ballroom may well be my own harbinger of an emerging Phoenix, embodying all of its possibilities and potential while reveling in its own quirks, differences, rhythms and strengths. It’s got soul grounded by a solid business proposition, aggregating and unleashing the collective dreams of a City that is just learning how to reimagine itself.

I know Charlie is just letting me come along for the ride, and I am perfectly content with that, if for no other reason than the rotation of music and the crowds always makes for an interesting evening.

Photo Credit: Photograph by the author.