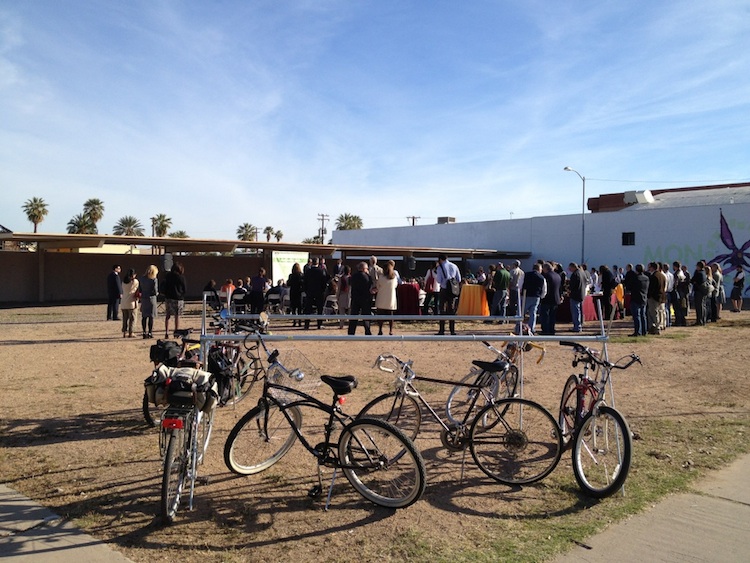 Michael R. Davis, AIA is a second-generation Arizonan who has lived in Phoenix since 1973; when the population of Maricopa County was 1,157,000. He is an architect, artist, theologian and mountain climber currently in training for a January 2013 attempt of Mt. Aconcagua in South America.

These are interesting days.
Interesting to me, anyway, because they’re not too dissimilar from days past.
Interesting because we’re in a pattern that we can’t seem to break.
Bankers still rule development. Designers have become aestheticians at best, compliance managers at worst. All around us we see more ‘oatmeal’ in our thinking, more ‘homogeneity’ in our design, and sadly, tragically, no sense of ‘place.’
The heart of Phoenix is buried under miles of dirt. Development pushes further into the desert, while giving lip service to ‘green’, ‘sustainability’, ‘walkable’, ‘Transit-Oriented Development.’
Hundreds of big-box retail buildings sit empty in the suburbs – a promise to become the ‘heart and soul’ of community, broken – as if a strip mall could ever be that.
Empty buildings. Empty property. Dirt.
Sad.
We’ve said it before and it’s time we say it again: It’s time for a new model, a new paradigm, new thinking.
The only difference, of course, is now we actually have to do something about it.
We need to execute.
Admittedly, I was having a difficult time finding my way into the Community 3.0 conversation. I was looking for an answer.
And then it dawned on me: The answer was a question: “What Should Go Here?” And the ‘here’ is a little patch of dirt and rocks in the center of Phoenix.
TheRO2 Lot – yes, owned by me, an architect – is important figuratively as a metaphor for the Valley itself, and it is important literally as a parcel of property that could easily become an anchor – or an answer – to a new type of community.
Not only in Phoenix, but anywhere.
While I know where this question starts – at Second Street and Roosevelt; I have no idea where or how it will be answered. Or where it will land.
But, we have a beginning, thanks to the efforts of Dorina Bustamante/Urban Initiatives and Mira Word/ASU student; Cindy Dach, Kenny Barrett and Greg Esser of Roosevelt Row; Wayne Rainey, the pioneer of MonOrchid; Kirby Hoyt and Rob Izer/Edge Industries; Jonce Walker/Maricopa County and Lauren Kuby/ASU School of Sustainability; Mayor Greg Stanton, William McDonough and Colin Tetreault, who just raised the ante with “What Is Your Story, Phoenix?” The Ro2: Neighborhood Mural Project, organized and curated by Hugo Medina, bringing together artists Colton Brock, Lalo Cota, Angel Diaz, Gennaro Garcia, Pablo Luna and Thomas Breeze Marcus collaboratively…
…and hundreds of others who are doing their part to shake the community into a state of wakefulness and design a way out of the cul-de-sac.
Beyond the oatmeal. Beyond the homogeneity.
Once we have a beginning, the rest is inevitable.