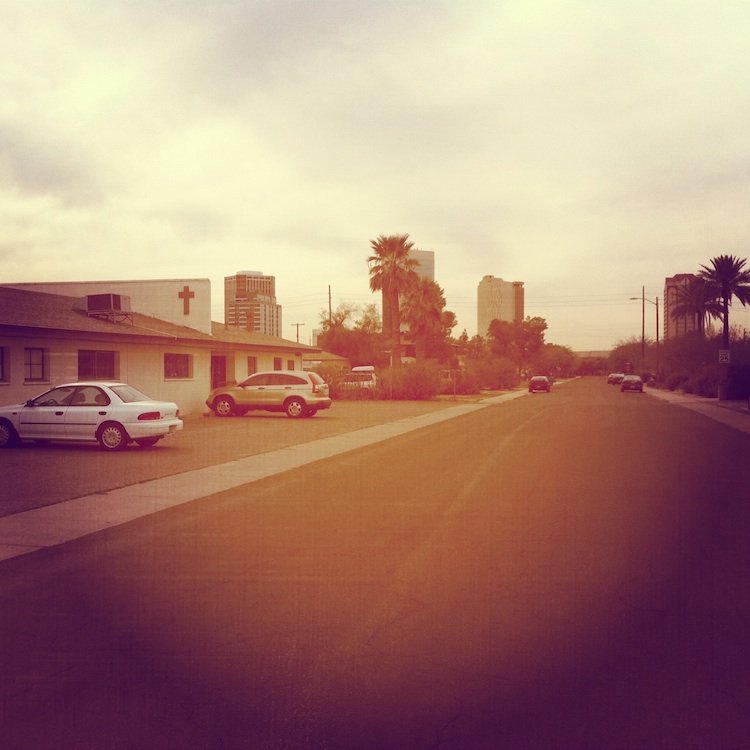 An Interview with Jon Talton about the Future of Phoenix

Jon Talton, a Phoenix native and an Arizona Republic columnist at one time but now a resident of Seattle, doesn’t pull any punches on his blog Rogue Columnist. He is the author of the Phoenix-based David Mapstone Mysteries, The Pain Nurse, first of the Cincinnati Casebooks and the thriller Deadline Man. His new novel is South Phoenix Rules.

Talton is often criticized for being too negative about Phoenix, but it is his underlying love for the city that drives him to expose this place’s reality as he sees it – complete with a rich history, misguided dreams of unlimited growth and unlimited resources, and a dubious future.

Last week he took my interview with Yuri Artibise, which was published for Firefly Living, and answered the questions from his point of view. You can read The Exit Interview on Rogue Columnist here.

This prompted me to interview Talton more directly and ask him what he thinks about the future of Phoenix, especially from the perspective of someone who still very much cares about this place but doesn’t live here anymore.

Blooming Rock: Do you think there is any hope left for Phoenix and if so, where does it lie?

Jon Talton: There’s always hope. The prevailing hope in Phoenix is for a return to the old Growth Machine, big population increases and massive new sprawl development, fulfilling the so-called Sun Corridor. This is a dead-end for a quality, competitive or sustainable future.

Phoenix’s real hope lies in abandoning real estate and population growth as the driving forces of the economy and embarking on aggressive economic development to build high-wage industries; enhancing education at all levels, particularly to provide a ladder up for the large underclass; living within, or even shrinking, the existing urban footprint and creating high-quality density that is served by abundant, convenient transit; developing a new class of stewards that can knock heads and write checks; creating a real 24/7 live-work-play downtown; investing in shade islands with plenty of shade trees and in some cases grass; restoring some agriculture in a more sustainable way; building out the Phoenix Biosciences Campus to its potential; restoring political pluralism and eschewing political extremism; spurning parochialism to reach out for world talent, investment and ideas, and generally developing the assets that one would expect from a metro area of more than 4 million people. I could go on, but that’s a short list. Hope is not lacking.

Blooming Rock: What should Mayor Stanton’s top 3 priorities be?

Jon Talton: 1) Building out the Phoenix Biosciences Campus downtown on the model of the Texas Medical Center, with medical/nursing/pharma schools, hospitals, academic and federal research and private-sector research and development; 2) Filling in the Central Corridor and the rest of the light-rail route with private-sector investment, with the jobs and development that will naturally follow — the abandonment of the central core must be stopped and something must be done to address land banking; 3) Establishing a Phoenix-only economic-development organization with the tools to go after industries, particularly in Southern California, and foreign direct investment to benefit the city.

Jon Talton: It “works” inasmuch as City Hall is fairly clean and efficient at what it does. When this system was established by the Charter Movement, and even with Terry Goddard’s reforms, Phoenix had major companies and engaged business leaders who could write checks and knock heads. City Hall just had to be run cleanly and salute. Today Phoenix is the largest city without a strong mayor and the city council as a legislature. Thus, the mayor is one vote (with some enhanced power). While a strong mayor doesn’t guarantee success, it helps provide more robust leadership, providing other institutions are healthy or at least not corrupt. Phoenix faces so many challenges while the old council-manager form of government has arguably become archaic.

Blooming Rock: What has to happen if Phoenix hopes to become more sustainable?

Jon Talton: “Sustainable” has become one of those words hijacked to meaninglessness; in metro Phoenix is means technology will somehow magically allow the pre-crash status quo to continue. Another word is “green”: It really doesn’t matter how many LEED stars a development has if it has been built on greenfield land and has destroyed rural or desert land. Continuing the old sprawl game is unsustainable in the face of climate change, high energy prices, high debt, limited water supplies and changing tastes, not to mention any hope of saving the magic of the Sonoran Desert. Hundreds of thousands of new single-family houses in Pinal County, Buckeye, etc. are not sustainable.

Sustainable means a future where incomes, knowledge, talent, diversity, social justice, opportunity, culture and innovation grow, not necessarily population. Phoenix must take water resources and restraints seriously. This doesn’t necessarily mean more desert landscaping, and certainly not throwing down gravel as the city does. It’s more complicated. The city needs its shade islands, such as north central, the historic districts, Encanto Park, etc., In fact, it needs more. Other areas need quality desert living, with the emphasis on quality. We could learn much from older areas of Tucson, and its Moorish predecessors, with walled courtyards instead of big lawn spaces. Phoenix needs much, much less concrete; less dependence on single-occupancy car trips. It needs more centralized employment centers, plenty of frequent, clean, convenient transit, commuter rail and intercity passenger trains to LA and Tucson. The metro area should have a moratorium on all development outside real, existing urban footprints. If the law won’t allow that, elect people who will change the law. This is ultimately a question of survival. The reality we face everywhere is discontinuity. The future won’t be a replay of the years in which Phoenix grew to be so big.

The most sustainable future would be a city that retreats back to the footprint of the Salt River Project, with its renewable water resources (although even these are not a given), living in high-quality density and a metro population of perhaps 2 million.

Blooming Rock: What do you think Phoenix’s fate will be if those things don’t happen?

Jon Talton: Consequences are already happening. Summers have gotten substantially hotter and longer. Air quality is poor. Cancer clusters are one of many dirty little secrets of a built-on-the-cheap, anything-goes, low-quality economy. Phoenix is not competitive with similar sized metros by almost any measure of quality. The business community’s leadership has shrunk. Phoenix has difficulty attracting college-educated people outside the retiree cohort. So much of the magic of the city and the state has been lost. It’s tragic. Longer-term, Phoenix is very poorly positioned for the reality of discontinuity: Climate change, higher-cost energy, scarcity of water and other commodities, the world chase for talent and capital, the increasing stresses and destabilization of 6.8 billion people on this planet. It doesn’t really matter if most Anglo Phoenicians are happy now with the status quo and want to be left alone. Reality doesn’t care. Reality won’t leave Phoenix alone.

Blooming Rock: Why do you think a historical context is important as we move forward in Phoenix?

Jon Talton: First, we’re repeating the hubris of the Hohokam, but on steroids. Second, Phoenix has a fascinating history, which informs today’s troubles and opportunities. It’s a grand refutation of such nonsense as “Phoenix has no history,” or “Phoenix never had a real downtown,” or “we’re individualists, we don’t need no federal gub’ment help.” As Harry Truman said, the only new thing in the world is the history you don’t know.

Blooming Rock: What should we stop doing in Phoenix?

Jon Talton: Sprawl development; so-called master-planned communities; political extremism and intolerance; decentralization of employment and other assets; waiting for the Growth Machine to sputter to life one more time; building freeways; throwing down gravel, and tolerating an inferior education system.

Blooming Rock: What should we keep doing?

Blooming Rock: What should we start doing?

Jon Talton: I gave a couple of lists in the questions above. To drill down a little deeper: Create critical mass downtown with plenty of practical retail shops and other businesses, not just restaurants and art galleries, all within walking distance, reachable by light rail. Plant a thousand shade trees (not palo verdes). Be a civic consumer and spend with the local businesses that have kept faith with your neighborhood and city. Make regime change at the capitol, with a reality-based, pro-urban-solutions, pro-education Legislature and governor. Get over the thin-skinned booster mentality and engage in discussing real problems, solutions and opportunities.