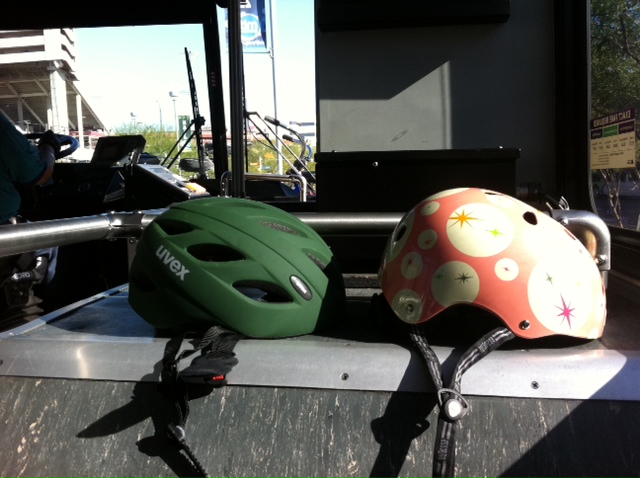 A Car-Free Thanksgiving Weekend in Phoenix

Thanksgiving is a nice day to get together with friends and family and celebrate everything that we’re thankful for. The three days after are great for shopping, recreating and running errands. But how do you do all that without a car?

Paul and I found out.

We figured out a way to get to my parents’ house in Chandler, who live on Ray and Alma School, from Indian School and 11th Avenue. How did we do it? We planned our car-free trip with the combination of Valley Metro’s online Trip Planner and the Transit Book which is available for download.

We had to contend with the fact that the Light Rail and bus were running on a Sunday schedule on Thanksgiving day, which meant that they were not running as often, and if we missed one train or bus, it would be a full half hour or more before the next one came along.

Luckily, we gave ourselves plenty to time, because it turned out that it took us a full 2 hours to get from Central Phoenix to Chandler that day. Our trip consisted of a bike-ride to the Light Rail station on Indian School and Central from Red Mountain. We rode the Light Rail to the end of the line in Mesa.

There are bike hooks inside the Light Rail, though as a woman with a heavy bike I find it almost impossible to hang my bike on those high hooks and I usually end up just standing with my bike in the aisle. 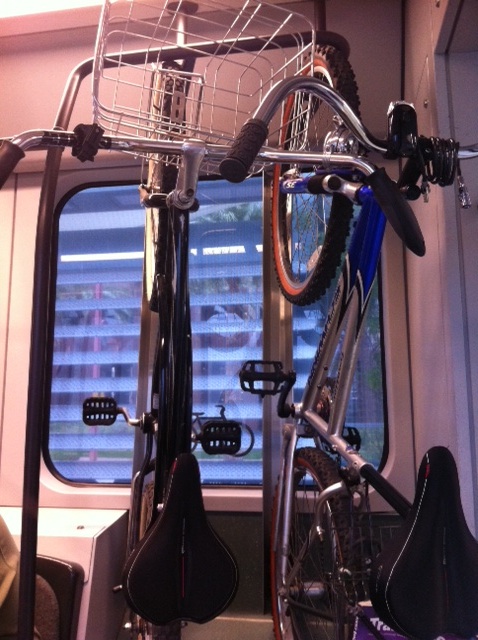 From the Sycamore Light Rail Station, we caught the 96 bus all the way to Dobson and Ray in Chandler. The bike racks on the bus are easier to use, but you can only fit three bikes, sometimes two on each bus, so if the racks are full, you’re SOL and have to wait for the next bus. 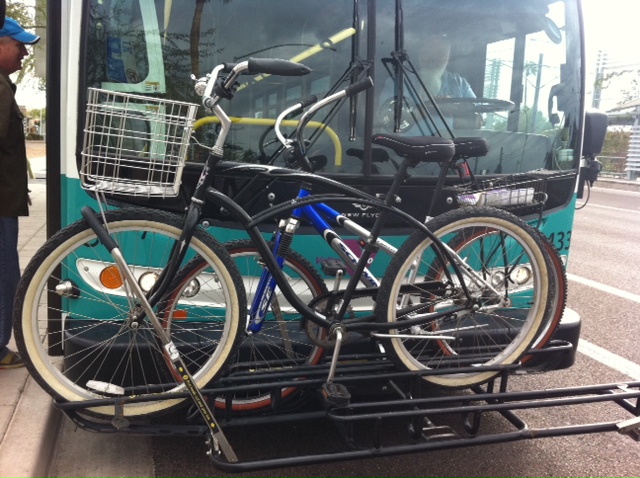 From Dobson and Ray we rode our bikes on sidewalks and bike lanes 1.8 miles to my parents’ house. What I found in that part of Chandler is that the sidewalks were very pleasant to use, much nicer that what I’m used to here in Central Phoenix. They were wide, meandering and had a decent landscape buffer from the busy street. People in that area appeared to use these nice sidewalks a lot, ranging from joggers and fellow cyclists to couples walking a stroller or walking a dog.

On Black Friday we decided to check out REI for good sales on some very cool bicycle helmets I had seen there previously. (Sidebar: REI isn’t local, I know! But I checked out some local bike stores and none had the helmets I was looking for. Next best thing, though a national chain, REI is still a good corporate citizen.)

This time, we were able to find a bus line, the 39, that took us from Camelback and Central, a short bike ride from Lux Coffeebar, our breakfast hangout, all the way to the Paradise Valley Mall Transit Center – with no transfers! It was a beautiful route, we didn’t have to do the driving, and it was only about a forty minute trip. 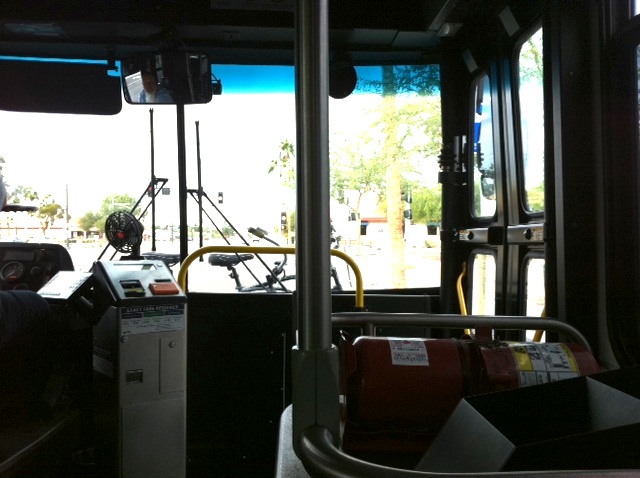 While we were in the Paradise Valley Mall area, we rode our bikes from store to store. We found that riding bikes was the last thing that the mall was designed for. Motorists that we encountered were startled and found us annoying, and we had to be extra vigilant to get around safely.

On Saturday I had a commitment to sit on a review panel for a Capstone Class at the ITT campus near Baseline and the I-10. Paul accompanied me and hung out at the nearby Arizona Mills Mall. This time we took the Light Rail, with our bikes in tow, to the Tempe Transportation Center (the Valley’s most beautiful and usable transit center in my estimation), where we caught the 48 bus going south to Baseline.

Unfortunately, the bus dropped us off on the east side of the I-10 and the ITT campus is on the west side, which meant I had to do one of the most onerous things a cyclist ever has to do – cross the freeway. The facilities for crossing were so bad and so unsafe, I swore to myself to never cross the I-10 in this area on my bike again.

Crossing a freeway isn’t like crossing any other street, no matter how wide. With the various on and off-ramps going different directions, it’s more like you have to cross the street four times to get to the other side of the freeway. And in this case some of the 4 streets I had to cross had pedestrian crossing signals and some didn’t. In fact, on the few that did, the signal didn’t seem to work. And keep in mind that when cars are exiting off the freeway, the last thing they look for are bicycles and pedestrians, so the freeway-crossing experience can be especially treacherous.

On Sunday, I stayed close to home and didn’t really need to ride the Light Rail or the bus. I was able to get around on my bike to get to Lux Coffeebar in the morning, then to my yoga studio, Urban Yoga, south of Osborn on Central and then even to my ritual Sunday lunch spot – Pho Thanh on Camelback and 17th Avenue.

1. You can get to pretty much anywhere in the Valley without a car, thanks to the Light Rail and our Valley Metro bus system. There is no reason to think you can’t take advantage of the wonderful things available throughout the Valley because you don’t have a car.

2. Our Valley Metro bus system is surprisingly workable, even if it could stand to be better serviced, with shorter wait times and more routes.

3. You have to allow for plenty of time (I mean hours) to travel regionally within the Valley without a car.

4. With all the tools available, from hard copy books and maps to online trip planners, you can master the public transportation system, like Paul has, and easily figure out a transit route to your destination.

5. People on the bus tend to look sad and downtrodden. The bus, as I experienced it, is definitely not the realm of hipsters yet. It’s more a mode of transportation for people who don’t have any other choice but to take the bus. But since the bus is such a great option to get around, especially in conjunction with the Light Rail and bike, I hope the stigma of the bus will disappear as more and more people start to use it.

6. A lot of people who can afford to drive, have their own car or a multiple of cars, take the Light Rail by choice. That means you see a lot more happy people on the Light Rail than you do on the bus. Thankfully there is no stigma to riding the Light Rail. But, if you want to go car-free, you can’t just rely on the Light Rail to get around the Valley. The bus system is a necessary supplementary mode of transportation and that’s why it’s important to make it trendy and cool (and easy and safe and pleasant) to ride the bus.

7. I overheard a few hard luck stories and conversations on bus stops and on board buses. Even though it’s sometimes downer, sharing the transit experience with people who are struggling is enlightening and highlights the economic disparity between people who drive and people who don’t. It also makes you grateful for what you have, which seemed especially poignant on Thanksgiving weekend.

This long weekend was my first foray into traveling far into the depths of various suburban areas of Phoenix without a car. I learned a lot about how bike/ped friendly different areas of the Valley are. More importantly, I faced my fear of traveling relatively long distances to visit family, shop at a particular store or eat at a particular restaurant that is far away without a car. Now that I know I can do it, I feel that much more of the freedom in car-freedom.

« The Guts of the Castaway House  |  Light Rail Tourism in Phoenix »