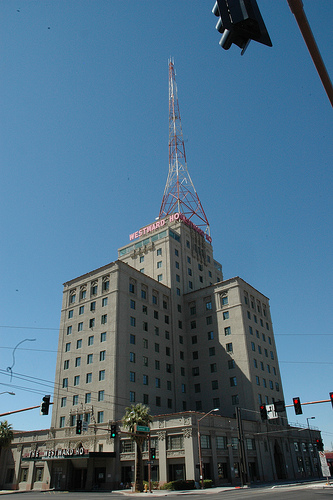 Bring Back the Ho 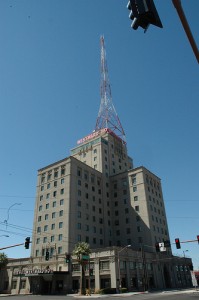 There have been recent rumblings on Facebook that Ben Bethel, the man behind Midtown’s Clarendon Hotel, may be acquiring the old Valley National Bank building and finishing its conversion to the Hotel Monroe.  That would undoubtedly be great news for Downtown, as a hip boutique hotel would be a welcome addition to Downtowns amenity portfolio.  The last few years have seen a fair amount of activity in the Downtown hotel market; new hotels like the Sheraton and Westin have been built, others like the Wyndham and Lexington are set to rebrand, and there are still hopes that the Hotel Palomar at CityScape will be built.  However, even with all this good news the quantity, quality and variety of Downtown Phoenix hotels is severely lacking.  With the new Convention Center attracting thousands, and Downtown really starting to click, its time to bring back the Grand Dame of Downtown Phoenix hotels: The Westward Ho. 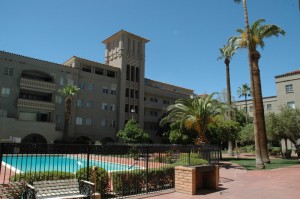 The 16 story Westward Ho opened its doors in 1928, shortly before the onset of the Great Depression, and proudly stood as the tallest building in Arizona until 1960. Over the years, the Ho was visited by Marilyn Monroe, John F. Kennedy, Elizabeth Taylor, Paul Newman, Roy Rogers, John Wayne and others before it was converted to H.U.D. (Housing Urban Development) housing for low income Seniors in 1981.  At one time the grand hotel boasted seven bars, a 15th floor terrace with sweeping Valley views, a tunnel to a subterranean bowling alley and the magnificent “Thunderbird Room,” which was the meeting place for Arizona’s elite for many years.

When comparing Downtown Phoenix to other regional Downtowns our fair city comes up woefully short in its hotel stock. Desperate to alleviate the lack of Downtown hotel space, the City itself built the 1,000 room Sheraton in 2008 to serve Convention Center visitors. However, even with the Sheraton our Downtown has fewer than half as many rooms as rival cities like Denver and San Diego (see chart).  Not only does Downtown PHX lack in the number of rooms, but the variety of rooms is sorely lacking as well.  For instance there is only one boutique hotel Downtown, the San Carlos, though hopefully the Lexington and the Hotel Monroe will soon join it. There’s a complete lack of unique, high-end hotel space in our Central Core, a void that a rehabilitated Westward Ho could easily fill. 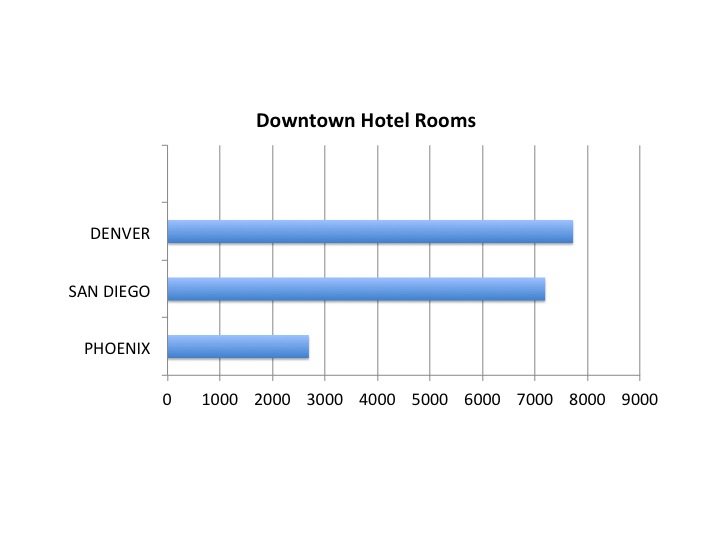 Seemingly by its nature, our City Government has done a fairly good job with big projects; Chase Field, US Airways Center, the Light Rail, the Convention Center, etc., but struggled with the fine grain issues that really make a Downtown work. The private sector and local community seem to do a much better job with the small-scale projects that really bring flavor and character to our Downtown; and perhaps this sort of public/private division of labor is a wise course to continue pursuing. With that in mind, revitalizing the Westward Ho and bringing it back online as a high-end boutique hotel should be one of our next Mayor’s priorities.  Having the Ho, with 200 or so rooms, back online won’t close the huge hotel room gap with Denver and San Diego, but it would be a step in the right direction.  By its urban nature the Ho would be at a slight disadvantage to the Valley’s other high-end hotels with their sprawling campuses and championship golf. However, the lack of a golf course is nothing that couldn’t be overcome; shuttles could be provided to City Golf Courses and/or the Phoenix Country Club. Plus, the Ho’s location in a walkable core would be something places like the Biltmore and Phoenician will never be able to offer.

Dreaming of a grand-again Westward Ho of course begs the question, what of the current residents? I, for one, would love to see them stay in Downtown, as they add to the vibrant mix of people that make up a cosmopolitan core. Downtown isn’t lacking in City-owned land and it would be great to have a new building constructed that is designed specifically for the needs of the Seniors who are currently at the Ho. The old Pappas School site might be a fitting place for new H.U.D. housing, or perhaps somewhere near the Bio-Medical campus so that the residents would have extremely easy access to top flight medical care as that area develops.

With the recent announcement that Super Bowl XLIX will be played in the Valley, 2015 would make an excellent goal date to have the Westward Ho back online as a working hotel.  Wouldn’t it be grand to look down on Central Avenue from the Ho’s 15th floor and watch the parade of the first ever team to win the Super Bowl in its home stadium? The Cardinals in another Super Bowl in my lifetime? Maybe I am dreaming too big this time.

Photo Credit: All photos and images by the author.