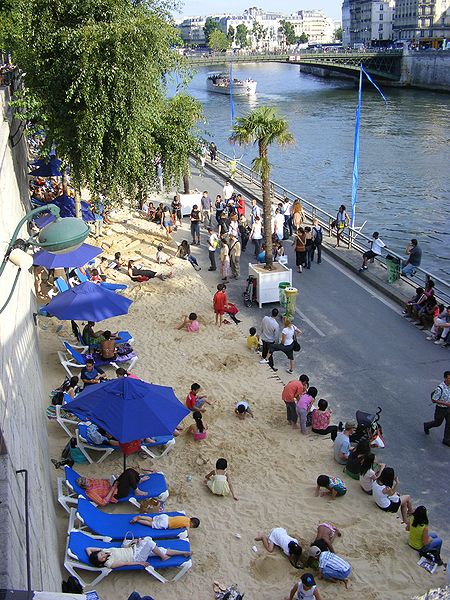 Let’s Bring the Paris-Plage to Phoenix

Fred Kent, President of the Project for Public Spaces, has said that in his opinion the best public space in the world is an annual month long summer program along the Seine in Paris, the Paris-Plage (Paris Beach). For one month each summer the roadways near the Seine are closed down, covered in sand and turned into man made beaches full of programs, events and games.  Every year millions of Parisians who are unable to leave the City for the summer enjoy the man made Riviera on the Seine.

Paris’ man made beach program started in 2002 as a single beach and has now expanded to both sides of the Seine, stretching almost two linear miles. The event is paid for both by public funds and by numerous corporate sponsors, who keep a relatively modest profile so the event doesn’t feel overly commercialized.  The Georges Pompidou Expressway, which straddles the river, is closed down in order to make room for the man made beaches, and a shuttle ferry carries revelers from one side of the river to the other.

A large part of the success of the Paris Plage is due to the huge variety of programming; there’s something for everyone. On hot days they have misting fountains, there are places for rollerblading and jogging, dance and exercise classes take place along the water and there are concerts in the evening.  Book borrowing through temporary mini libraries is available and there are numerous art installations for the more culturally inclined. 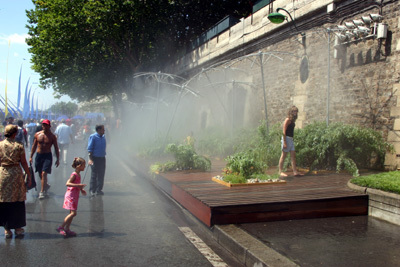 In recent years, primarily through the Canalscape vision, reclaiming the Valley’s hundreds of miles of canals has been increasingly in the local zeitgeist.  Various canal beautification projects (at the Arizona Falls, in Sunnyslope and across the Southeast Valley) and Scottsdale’s newish canal waterfront project has shown a tangible desire for Phoenicians to be able to interact with the underutilized water infrastructure.

Co-opting Paris’ temporary urban beach program could be a relatively easy way for Phoenix to re-embrace the Canals and raise funds for canal improvements all while creating a world-class public space.  The best place for a “Phoenix Plage” (or perhaps we’d use the Spanish word, “Playa”) would be along the Grand Canal between 16th St and 7th Avenue, a stretch just over two miles.  An active urban ribbon along that stretch would bring together the 7th Avenue Merchants Association, the Melrose Neighborhood, Midtown and Uptown business and residents, three high schools (Central, Brophy & Xavier) and the newly emerging Calle 16 district.

Unlike Paris, a temporary beach in Phoenix couldn’t be done in the summer, it truly is too hot, but October would work well. The Phoenix Plage could perhaps become something of a kickoff for ‘the Season’ in Phoenix and it would still be warm enough to have a beach feel without burning one’s feet (like used to happen at Big Surf in July). Numerous vacant lots, surface parking lots, schools and parks line the Grand Canal and they could be temporarily converted into flexible event space. Single-family homes line large portions of the Grand Canal, which would require the most highly used portions of a Phoenix Plage to be centered at various nodes with less noisy programming abutting the detached homes (strolling, sunbathing, game tables, etc.).

Obviously, actually going into the canals would be verboten for safety reasons (as it is in the Seine) but the amenities and events that could be packed into a month long event are only limited by one’s imagination.  Nearby businesses could set up booths to expand their customer bases, the Valley’s growing Food Truck community could park near the Canal, the adjacent High Schools could put on concerts, performances or parades, and artists from Calle 16 could do demonstration mural projects.  During the month that the Plage is in place, it could be added to First Fridays, and perhaps a temporary farmers market could be included in the festivities as well (except on Wednesdays or Saturdays, to avoid conflict with the Downtown Market).

A large event drawing thousands of new people to the Grand Canal could be the catalyst for capturing the public’s imagination about the possibility of the Canals across the Valley. A Phoenix Plage could slowly help raise money for canal beautification and public art projects along its length and eventually all across Phoenix canals.  If the event became a rousing success it would likely spur some of the first CanalScape developments along it, as developers would want to cash in on the newly trendy location.

Phoenix lacks a great urban, community-gathering place. We’re so spread out that we don’t get very many chances (save First Fridays) to stroll together and bond as a City. Maybe a Phoenix Plage would give us that opportunity, if only for a month, while we wait for the City to grow denser.