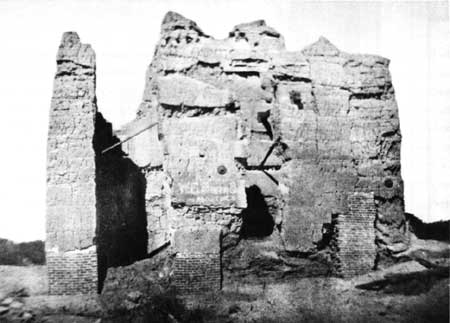 An Essay by Will Bruder: Arizona’s Architecture – The First 100 years

This week I am posting Will Bruder’s excellent essay for the 98th Arizona Town Hall meeting, “Capitalizing on Arizona’s Arts and Culture”.

I’ll be posting the essay in 3 parts. In today’s post, which is the second part, Will gives an extraordinary account of the history of architecture in Arizona. If you missed part I, where Will defines architecture and the urban fabric, catch it here.

If you’d like to read Will’s entire essay in one sitting, you can find it on the Arizona Town Hall report starting on page 76.

Arizona’s architectural identity is built on a foundation of sustainable resourcefulness and invention. This ethos has been tried and tested in times of abundance and scarcity. The wonders of Arizona, its geologic history, varied flora and fauna, ever visible defining horizon and nearly ideal climate have continued to speak of possibility and promise. Consider as a first architectural invention the early wattle and dab pit houses and earthen and stone walled villages of Casa Grande and Snake Town supported in the Gila and Salt River Valley by vast irrigation systems, systems that left indelible marks to this day, and perhaps an ominous warning about fragility (the unexplained disappearance of Hohokam peoples).  Add to these the stone ruins of Montezuma’s Castle, Wupatki, Keet Seel, and Betatakin as well as he living village of Walpi on First Mesa of the Hopi Reservation.  They all offer lessons of community and sustainability.     Further along in our time line came the 15th century adobe brick Spanish mission churches and garrison compounds.  They were functionally pragmatic structures poetic in their directness of purpose and making as were the later buildings in support of the ranches, mines and farms of Arizona’s first settlers in the mid -19th Century.

Spanish land grants and the rigor of the Jefferson grid progressively mapped the vast landscape, overlaying the varied topography of the young Arizona Territory. Trail and rail alignments grew and their intersections defined and placed the built forms that have matured into the towns and cities that we know today.   The modern water reclamation projects, the automobile and the airplane as well as the development of mechanical cooling technology in the first half of the 20th Century catalyzed Arizona’s expansive growth and set the stage for the unique and respected character of its architectural identity.   Towns and emerging cities through their architecture started to reflect the pride, aspirations and optimism of the successful residents and ambitious community leaders who migrated to Arizona. Prescott, Tucson, and Phoenix boasted vibrant main street downtowns by the 1920’s. Phoenix alone could claim fourteen streetcar lines in its downtown in 1921. Through increasingly sophisticated communications news spread of Arizona’s natural beauty and mythical identity. Photography, open-air painting and journalism revealed and celebrated its spare and wondrously lush desert and varied geologic history. The quality of light, ever visible horizon and nearly ideal climate caught the imagination and ambition of many who heeded Horace Greeley’s advice: ‘Go west, young man. Go west’.   To accommodate and cater to those coming to see the Southwest for themselves hospitality architecture began to emerge. Architect Mary Colter designed for Fred Harvey at Williams and the Grand Canyon, the gracious Arizona Inn in Tucson by Merrill Starkweather opened in 1929, and  Albert Chase MacArthur and Frank Lloyd Wright, the mature internationally recognized master, collaborated in 1928 on the Arizona Biltmore Hotel in Phoenix. These and other early examples gave the state not a unified architectural style but a built reality that reflected the originality and energy of the place with its dramatically surreal landscape, its enticing climate and the optimism of the adventure. These are the roots of the uniquely regional modern architecture of Arizona.   Indeed Arizona’s expansive central desert would serve as the canvas for Wright’s hand and imagination as he conceived and modeled his sprawling utopian vision of Broad Acre City 1929-1935. The idea of Broad Acre City revolved around individual homes placed on plots of modest acreage serviced by futuristic cars and personal helicopters.  His diagrams of settlement depicted in seductive drawings extended over buildable land as far as the eye could see. Conceived in the middle of the Depression but optimistic in spirit (every occupant master of his own turf, tiling his own garden) it proved prescient of the suburban reality and post World War II America’s vision of itself.  In the late 1940’s, a combination of prosperity, population growth and cheap, seemingly endless, buildable land connected by possible networks of freeways and shopping centers, as in Southern California, drove and dominated Arizona’s growth. The single detached ranch home on it suburban lot would be the dominant model of residential growth throughout the second half of the 20th Century throughout America but particularly in the Sun Belt region.

However, while Wright conjured up a vision for urban growth in his Board Acre City plans, it was the memorable photogenic reality of Taliesin West 1936-59, his winter home and studio that would truly inspire all the modern desert architecture that was to follow. Sited beyond the edge of the sleepy farm town Scottsdale, at the base of the McDowell Mountains, Wright built a primal desert camp of rustic rubble rock and concrete walls whose angular folds and bends mimicked the mountains that seemed to embrace them and whose simple timber beamed canvas roofs formed both an image of the ages and one as temporal as a desert mirage.

This architecture demonstrated what truly original desert living could be. It extruded itself cleanly from the land while kissing the sky with a crisp clarity of intent. On the cusp of Arizona’s explosive growth, it provided a challenging model of abstraction and assuredness for all the Arizona architecture that would follow. It suggested a rethinking of possibilities and set down the first truly distinct built identity of the ‘new’ Arizona. No longer mere shelter these structures spoke to the power and potential of architecture in celebration of this place.

Adding to the mix of the investigations of Wright and his apprentice acolytes was the work of multiple young architects whose housing studies were put forward in the popular Arts and Architecture magazine’s Case Study program of 1945-1966.  Through this publication alone a new residential architecture was built, tested and viewed by the eyes of the world. News spread of a new way of living in the West that celebrated the comfortable modernism of dwellings that grew from the inside out and the outside in. In harmony with both climate and lifestyle these experimental these Case Study houses refined and often combined with the heritage of the more traditional courtyard buildings of the regions Spanish heritage to give our cities a fresh and appealing character.

From this period a distinct architectural style evolved that was particular to Arizona. New materials appropriate to the time and place made affordability and constructability common to not merely Arizona’s residential architecture but also to the civic, commercial and industrial architecture of its communities. Thus the architectural legacy of Wright’s Usonian experiments and the Case Study innovators was digested and refined by a generation of mid-century Arizona design leaders including Blaine Drake, Paul Schweiker, Ralph Haver, Al Beadle, Bennie Gonzales, Arthur Brown, Judith Chaffee, and a legion of others.   The image of ‘built Arizona’ was spread far and wide through features in Arizona Highways magazine and a growing national and international travel and architectural press.    In the early 1960’s Arizona’s architectural identity reached beyond the residential to its public libraries, community colleges, state universities, places of worship, banks/savings and loans, shopping centers, schools hospitals and industrial buildings. Now this work is being recognized for its historic value at the center of community preservation and understanding by a national mid-century modernist following.

With the prosperity of Arizona’s growth sprawling in all directions as Wright had divined it would be his former apprentice, the young Italian visionary architect, Paolo Soleri, who would through his drawings, models and writings redefine our considerations of the city. From his experimental Cosanti studio in Paradise Valley these ideas would come to full blossom in the large folio published by MIT Press in 1970. Entitled Arcology: City in the Image of Man (arcology, a combining of the words architecture and ecology). Beyond a statement of philosophy the book illustrated Soleri’s concept of three-dimensional sustainable cities growing from efficiently from the landscape without need of the automobile. These vertical armatures demonstrated Soleri’s thinking and suggested an approach that contrasted sharply with Wright’s Board Acre City model.

In the built experiments at Cosanti, ordinary materials and ideas grew logically and in extraordinarily artful ways from the landscape of its desert climate. Simultaneous to making these built experiments at Cosanti, Soleri laid out in text and sketch his notions about future life imperatives…complexity, miniaturization and durability. Before Earth Day was ever celebrated, before LEED certification was conceived, before the word Green was on everyone’s lips, Soleri was wrestling with the issues of sustainability that concern us so deeply today.

In the last 40 years the confluence of architectural talents set in motion by Wright’s work, Arizona’s ample stock of mid-century modern inventions and Soleri’s experiments have continued to influence, inspire, and form architecture in Arizona as we see it today.  Indeed the ‘Arizona School‘ has been increasingly recognized for creating buildings uniquely appropriate to the climate and landscape, iconic in their use of materials and light. Overall prosperity and political vision have catalyzed the commission of ambitious civic buildings that have garnered national and international attention, like ASU’s Nelson Center and the Burton Barr Phoenix Central Library. From civic to university, residential to commercial, multi-family housing to mixed-use high-rise, architecture of widely recognized distinction and specific community pride has resulted. Indeed today’s Arizona is something of a pilgrimage site for architects, designers, urbanists, and world travelers.

So something special has gone on here, a maturing line of significant architectural inquiry and practice has been laid down.  Now how do we insure that this ‘line’ continues to be a calling card for our state, a point of pride for residents and point of destination for others seeking business or pleasure? I suggest that we move forward in ways that are both bold and fine -grained, but always appropriate to this place and intrinsically sustainable.

Stay tuned to tomorrow’s final installment of Will’s essay that will discuss how he thinks we should move forward.

Photo Credit: The Casa Grande ruins of the Great House. Photo from the National Parks Service.