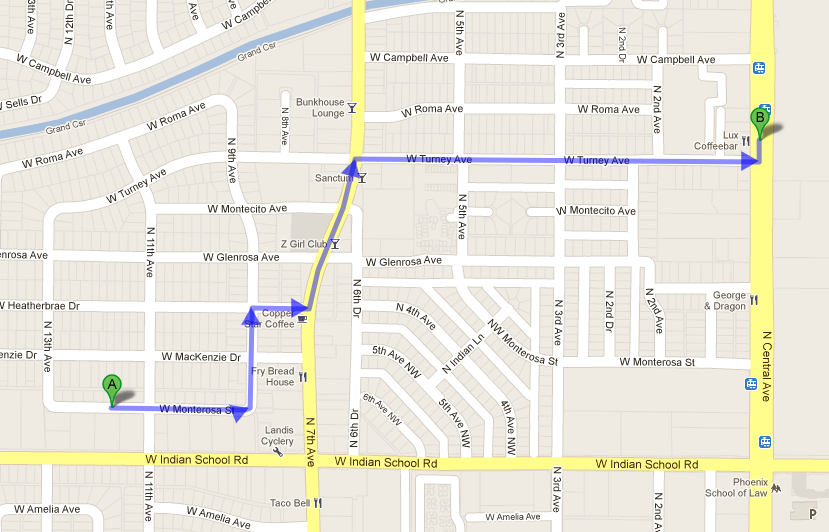 As you may know, Paul and I moved to Red Mountain, which is just outside the Woodlea Historic Neighborhood, about three weeks ago. We used to live at 3 Palms, in the Avalon neighborhood, between Osborn and Thomas near 16th Street. When we first decided to buy Red Mountain, I knew we’d be a lot closer to my office – Lux Coffeebar. But I didn’t realize how close we’d be to other stuff that we like too.

We have one car between the two of us and most days Paul takes it to work. So I have to navigate my day on my bike, the Coffee Cruiser. And when we lived in the Avalon neighborhood, biking was always doable, at times enjoyable, but at times it was a real effort too.

I’ve noticed the biggest thing that’s different now is that it’s actually preferable to bike to places than it is to drive. In other words, even when I do have the car, I still prefer to take my bike because the experience of biking is so much more enjoyable and many of the barriers to biking that existed before have been mitigated. For example, 95% of my trips to Lux Coffeebar are on my bike, whereas it might have been only 75% when I lived in the Avalon neighborhood.

Of course, this made me think – why? What are the factors that eliminated the barriers that existed before and why is it now preferable to take my bike instead of driving?

I’m just plain closer to the places I actually like to go to. Lux used to be 2.1 miles away, on the Grand Canal, when we lived in the Avalon neighborhood. Now it’s only 1.1 miles away. That one mile makes all the difference in the world, especially since it cuts the distance in half.

I’m also much much closer to a grocery store, to which I prefer to bike as well. The closest grocery store to 3 Palms, Ranch Market, was 2.2 treacherous miles away. I say treacherous because much of the distance was on a busy street, 16th Street, with no bicycle lanes, unpredictable sidewalks, and also included a highway crossing.

Best of all, I am closer to the Light Rail too now, which connects me to almost every other place I need to go, especially Downtown Phoenix. Whereas 3 Palms was 2.1 miles away from the nearest Light Rail Stop, Red Mountain is only 0.9 miles away.

In case my preferred mode of transportation ever breaks down, Landis Cyclery is a mere 0.3 walkable miles away, so I should never feel marooned at Red Mountain without a car and a broken-down bike. 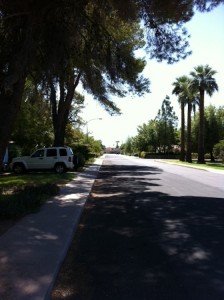 Biking through the Woodlea neighborhood is a real pleasure. This is mostly because it is an irrigated neighborhood with lots and lots of trees. The trees not only provide shade, but they bring a human scale to my biking experience. Instead of seeing miles ahead, I see only yards ahead, which is kind of nice.

It also helps that traffic is slower and more sparse in the neighborhood, so I feel safe riding on the street. None of this would matter if I couldn’t use neighborhood streets to get where I want to go. But in this case, because I’m so close to the 7th Avenue Melrose District, there are more businesses, restaurants, coffee shops and grocery stores embedded in the neighborhood so that I can actually navigate much of my life away from the busy main arterial roads.

3. The HAWK that Rocks 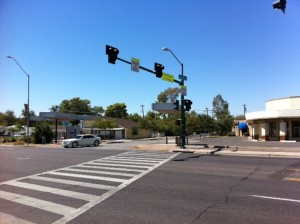 Seventh Avenue, especially during the morning and afternoon rush hours can be anything but bike-friendly. But there is this HAWK (High-Intensity Activated crossWalK) traffic signal on Glenrosa and 7th Avenue that makes it easy to cross. Without this signal, my daily bike commute to Lux would be much more difficult and it would definitely slip from being preferable to just being doable.

When I was bicycle-commuting from the Avalon Neighborhood on the Grand Canal, how I wished for HAWKS on the many canal intersections with arterial roads!

HAWKs work! They are relatively inexpensive to install and if we get more of them in, especially on the canals, it would do wonders in terms of getting people to walk and bike to their destinations.