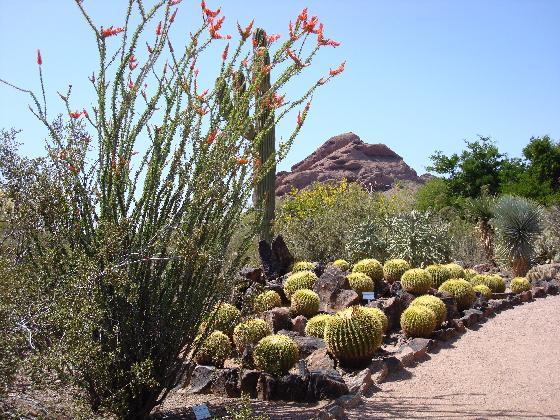 One of the most exciting things about being a Phoenician is being from a place that looks unlike any other major City in the United States. Very few large American cities are in deserts and only two, Phoenix and Tucson, reside in the world’s most beautiful desert, the Sonoran. Phoenix needs to do a better job embracing the desert and leveraging our unique climate to become America’s and the World’s foremost desert metropolis.

In Phoenix’s early days its Anglo residents were strangely embarrassed by the Desert and the Arizona Republican ran articles encouraging residents to “Do Away with the Desert” by planting non native plants. Phoenix’s forefathers were brilliant in the way they set up vast canals, dams and built a City in a seemingly inhospitable place but their foolish disregard for native plants is a legacy the City still struggles with to this day. Thankfully due to the rise in environmental awareness and the shrinking water supply, a large percentage of Phoenicians have embraced xeriscaping in the last 30 or so years.

Phoenix’s original neighborhoods once looked much like what you’d expect a desert community to look like; they featured adobe homes, native riparian plants and narrower streets. But as the City matured the early Phoenicians decided it was best to tear down the Adobe, put up Victorian homes and try to make Phoenix look like Cincinnati, Chicago or wherever else they had originally come from. Even to this day Phoenix’s inner ring suburbs look more like what you’d expect to see in Los Angeles instead of in the desert.

There’s certainly nothing wrong with the limited amount of homes in Central Phoenix and Arcadia that have lush lawns and non native trees, but as the City core continues to redevelop and empty lots are filled in, they should be xeriscaped. All too often when one attends a public meeting in Phoenix regarding a new street-scape project, park or other green space the residents of Historic Neighborhoods can be heard to say “Well don’t use puny desert plants!” It of course begs the question, if one is so repelled by the native desert plants why choose to live in Phoenix in the first place? Somehow a misconception has grown that desert plants are “puny,” “wispy,” and  “not shady” even though a quick trip to the Desert Botanical Gardens will prove that assertion flatly wrong.

If you ask someone from outside of Phoenix to draw an image that defines Phoenix they’ll likely draw a Saguaro cactus. Yet doesn’t it seem odd that there are hardly any of these stately cacti in our Central City? Often times visitors to Phoenix have never seen a cactus in their lives and would love to take a photo in front of a Saguaro, yet we make that simple task into a chore. We don’t need spiky desert plants in every planter strip or adjacent to bike lanes but when we build new parks, like Civic Space, they should include saguaro’s, cacti and succulents.

Since Western civilization has primarily been in temperate climates for the last few millennia it makes sense that our temperate City climates have a much easier time landscaping themselves. Xeriscaping has only recently become popular and in many ways takes more planning and  skill with design to be done correctly. Often time those protesting against a xeriscaped street seem to truly be complaining about the City’s poor track record with design (see: 2nd Avenue, South of Fillmore) rather than with xeriscaping itself. Good examples of shady, desert planted paradise exist in our downtown if people would only look (St. Mary’s Basillica’s courtyard & the mesquite bosque by the Municipal Court Tower). Recently a (water thirsty) Ficus tree was saved on First Street as part of a new street scape project and in these limited instances keeping historic non native plants is the right idea, but new plantings should be low water use.

Imagine a Central Phoenix that has streets that look like the paths of the Desert Botanical Gardens, it would be breathtaking, unique and the best thing for our environment. We’re never going to out Cincinnati or Chicago at their own look, so why try? Thankfully in recent years the State and City have begun to embrace a “right tree, right place, right care” tactic that embraces low water usage trees. Whether the residents of the Central Core want it or not, it seems that they’ll be drug into the 21st Century which will be one of water conservation.

The late 80’s in Phoenix were rather similar to what’s going on in our City today. The housing market was down, Arizona had just embarrassed itself with racists legislation (then: turning down the MLK holiday, now: SB 1070) and the State seemed cursed with crazy political leaders (then: Mecham, today: Brewer & Arpaio). But in the Summer of 1988 a terrific thing happened, the Phoenix Futures Forum. The idea was to get citizens from all over the City involved in planning out Phoenix’s future, no small feat in a town with such limited civic engagement. One of the best ideas to come out of the Phoenix Future’s Forum that never really went anywhere in the long term was the idea of the Desert Cities Conference.

Being the largest desert City in the most economically important Country on the planet gives Phoenix a unique place on the world stage. As the Middle East, and its hundreds of desert cities, continues to develop and modernize the City of Phoenix should become a world leader in what it means to be a sustainable desert city. Mayor Gordon has made some positive steps in this direction, but we need more interaction and cultural exchange with other cities to learn from each other and to find new ideas. According to the United Nations, since 1900 the population in desert cities in the developing world has increased eight fold and its unlikely to slow down anytime soon. With more and more people choosing to live in arid and semi arid climates across the globe, Phoenix has a natural chance to become a world leader in how to make that possible.

With a gorgeous new Convention Center, improved public transportation via the Light Rail and an ever expanding International Airport, Phoenix is now poised to bring back the idea of the Desert Cities Conference. Cold, northern cities for many years had the “Winter Cities Association” which has now morphed into the “Winter Cities Institute” and Phoenix needs a warm, arid weather answer to conferences like that. Many American cities (including our Western neighbors, LA, Denver, Seattle & Portland) have “World Trade Centers” that promote international trade within their city. Going forward Phoenix’s leadership should pursue attracting and building our own World Trade Center with a distinctly desert slant.

Most cities in the U.S. from St. Louis eastward look remarkably similar and Phoenix will never look like them even if we tried, so lets stop. In the past twenty to thirty years the Valley has begun embracing its desert identity much more and we need to continue that positive trend and begin to export the knowledge we’ve gained about desert living. Moving forward our goal should not only to make Phoenix into a 21st Century City but into America’s Desert Metropolis.