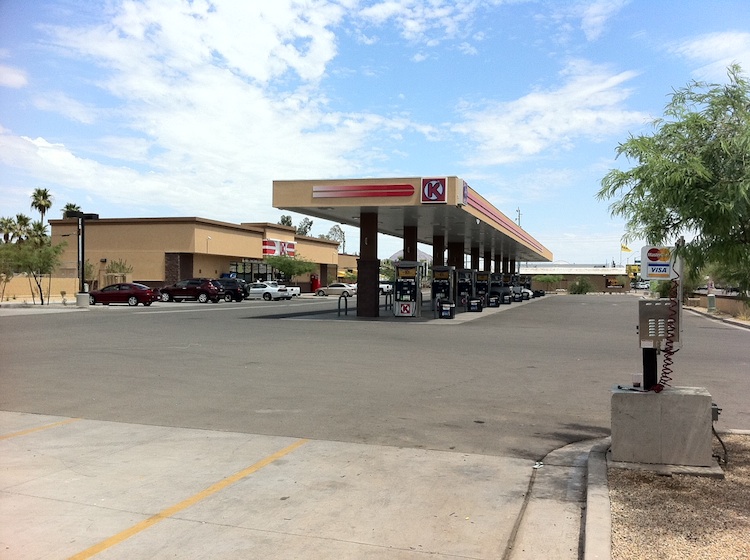 Sensitive Siting vs. a Turd on a Lot

On my way between Red Mountain and 3 Palms, I drive on Indian School between 16th Street and 11th Avenue a lot. I’ve been watching as the gay bar Padlock (which admittedly was a horrendous building) was torn down and in it’s place a Panda Express is being erected. What strikes me about this Panda Express building, which I’m tempted to refer to as the Turd, is that it’s tiny compared to the huge site it’s on. This is similar to my complaint about the Circle K down the street that was constructed last year.

A veritable alter to the car, the new-model Circle K on Indian School and 11th Street.

Of course, I’m not an advocate of making buildings larger than they have to be. But I’m also not in favor or taking a huge lot and designating a good 75% of it to parking. Here’s what I mean: 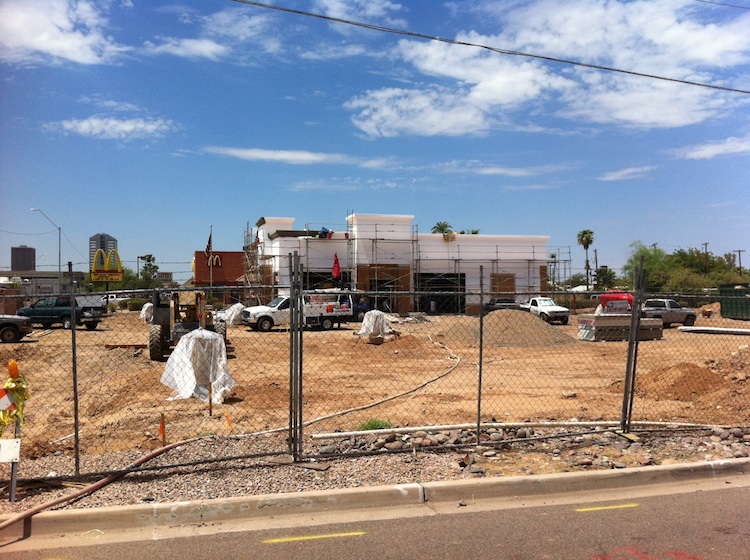 The Turd, I mean the Panda Express, in construction…

This project is not about the place or the people who will frequent the place, it’s about the parking. It’s a very suburban model where space (supposedly) abounds and insignificant tiny buildings like Panda Express can have thousands of square feet of parking surrounding them. My question is, what the heck is this stand-alone, super low-density building doing in the middle of Midtown Phoenix?

I see a disturbing trend in suburban scale development, with the Circle K and now the Panda Express, on this stretch of Indian School. I’m sorry that the Devonshire Neighborhood Association does not recognize the danger of these kinds of places to their neighborhood. I suppose they figure a Panda Express is better for their neighborhood than a bar, and I suppose on some level this might be true. But they could have built an entire strip mall on this site with a lot more density, a lot more emphasis on the actual place instead of the parking, and a lot more potential for actual neighborhood amenities.

That’s the Turd on the Lot. Now let me show an example of Sensitive Siting. 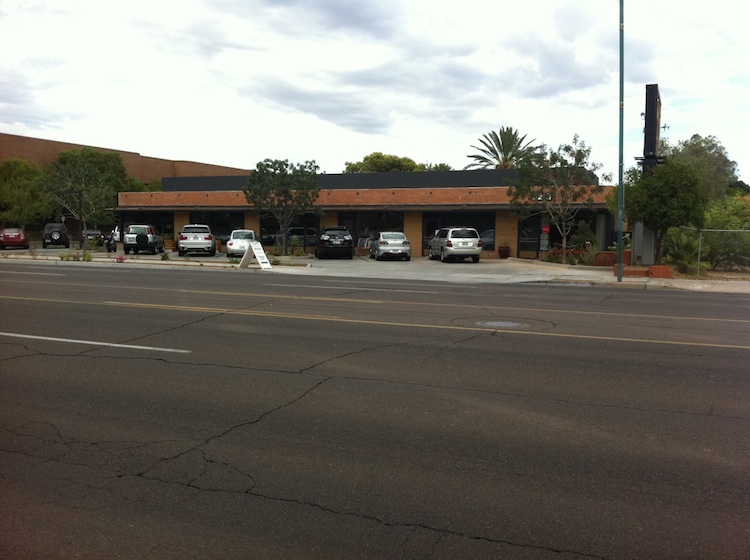 This is the recent redevelopment done by Venue Projects that houses Windsor and Churn among other local businesses. Admittedly, this is an old strip center that was already sited this way. But full credit goes to Venue Projects partners Lorenzo Perez and John Kitchell for recognizing and appreciating the sensitive siting of this building enough to keep it largely intact.

As opposed to the Panda Express, this project is all about the place and the people who frequent the place. The parking is secondary. Notice the proximity of the building to the street, making it amenable to those who decide to walk or bike there instead. Plus, the scale of this building, though low-density compared to other cities, but high-density compared to the Panda Express, makes it much more of a neighborhood-friendly spot that fits in well with the historic homes that surround it.

Even in the back of the building, the spaces where people hang out are given top priority and the parking is tucked in where it fits. 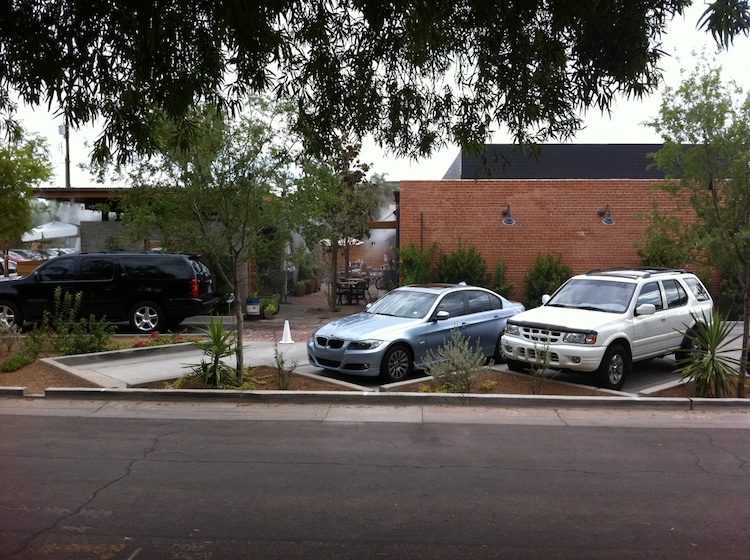 And the transitions between the parking lot and the actual building are addressed on a pedestrian scale with these planters in the front, for example: 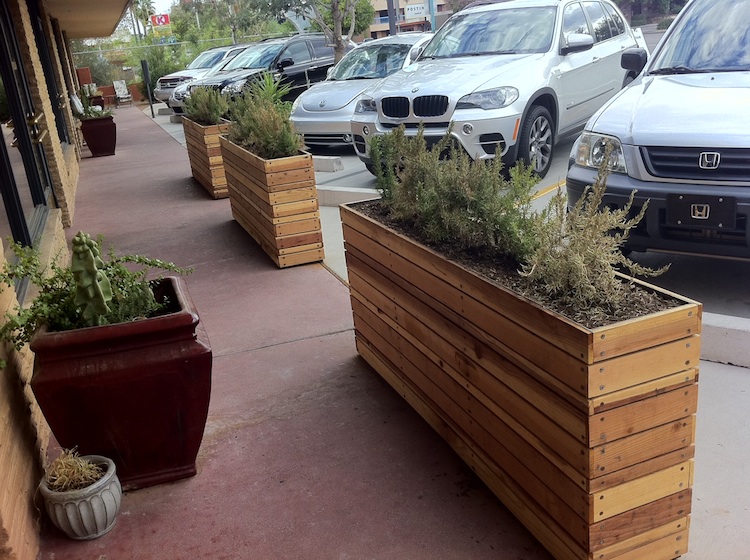 And this green screen in the back: 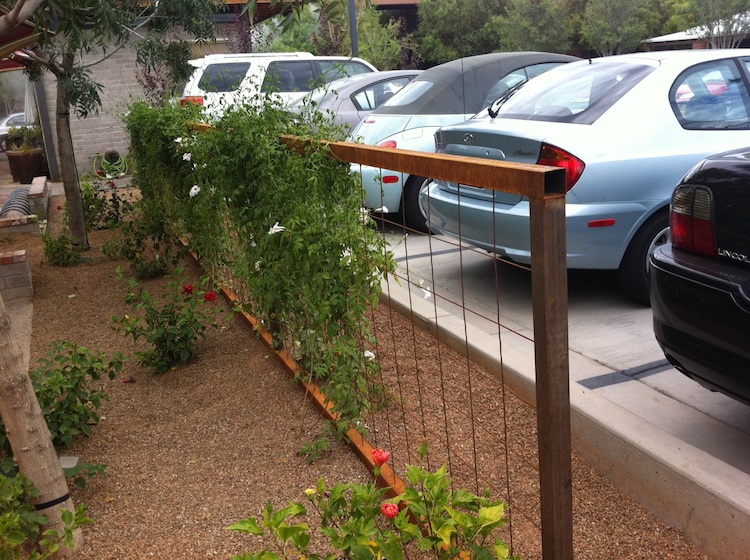 Obviously, the Windsor/Churn redevelopment is much more sophisticated and thoughtful than the Panda Express that was plopped down in all it’s mass-produced glory on Indian School and 9th Street. But the reason I even put these two projects on the same blog post is to illustrate how important siting and density of individual buildings are to the way our city looks and feels.

It’s important that the people of Central Phoenix understand the impact that developments like the Circle K and the Panda Express have on the street and the neighborhood as opposed to the impact that a redevelopment like Windor/Churn has on the street and the neighborhood. It’s the difference between tearing wide holes in our city fabric and stitching our city together with places where communities gather.

Next time a big chain like Panda Express comes to your neighborhood asking for your support, ask back some very pertinent questions about whether it’ll be a tiny building surrounded by a sea of parking or whether it’ll be one of several businesses in a more dense development. Don’t allow our Central Phoenix neighborhoods to be fragmented by super low-density developments like the Turd on Indian School and 9th Street.

Note: Stay tuned for more on Venue Projects and the Windsor/Churn redevelopment next week!

Leave a Reply to Bretts47