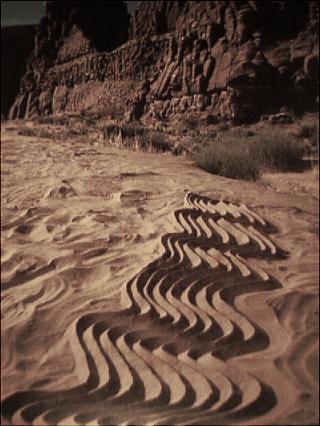 Eddie Jones on Design in Ruin

Today’s post is by one of my favorite architects Eddie Jones. I heard Eddie speak at the Arizona Historic Preservation Conference a few weeks ago about a new direction he’s taking with design. Find out why Eddie is tired of shiny new buildings and is more intrigued with the effects of time on the built environment.

Edward (Eddie) Jones, with his business partner and brother Neal, were raised in the oil fields of Oklahoma. From a very early age the two bothers aspired to be architects and share a studio.

Eddie was born in 1949 Texas and moved to the beautiful Sonoron desert in 1973 after graduating from Oklahoma State University. He founded Jones Studio, Inc. on June 8, 1979 3 months before his 30th birthday. It was not until years later, he realized he had begun his professional career on the birthday of his two major heroes… Frank Lloyd Wright and Bruce Goff. The planets had aligned!

For the past 32 years the Jones Studio family has grown to include 20 highly motivated and enthusiastic individuals. They enjoy an unusually broad list of building types ranging from a “2 holer” outhouse trailhead located on a remote desert site to the 57-acre Mariposa Land Port of Entry in Nogales, Arizona – the third busiest land port in the United States. The list includes museums, research facilities, performing arts centers, golf club houses, an NFL training facility, town halls, softball-soccer stadiums, and an entire college campus.

Having been honored with over 184 design awards, the small studio was exceptionally recognized during the summer months of 2006 when they were asked to be an exhibit in the Scottsdale Museum of Contemporary Art. To the best of anyone’s knowledge it was a precedent setting first time example of an architectural exhibit involving the relocation of an entire firm to a museum gallery. They were the exhibit… fully functioning, on public display for 4 months!

Eddie has the privilege of lecturing frequently around the United States and abroad. His love for discussing architecture is represented by an impressive list of Conference commitments, lectures, and exhibits.

I’m not sure when it started. Maybe it was when I saw one too many pointy metal buildings. Or maybe it was the day, I explored the 3,000 year old occupied fort city of Jaisalmer, India. Regardless, I have become very interested in a modern architectural theory inspired by TIME.

I recently presented a lecture to the 2011 Arizona Historic Preservation Conference in Tucson, titled “Design in Ruin.” At first glance the title might imply a cynical attitude towards the current state of American architecture. On the contrary, I could not be more optimistic. The possibilities available through our new advanced technological tools are, frankly, breathtaking!

However, the great equalizer of the built environment is the advancement of time. The moment we assemble a new building piece, nature begins to eat it. As professionals, we expend great effort to minimize the inevitable consequences. As a society we spend billions in a vain attempt to deny the obvious.

Because we are conditioned to perceive deterioration as a negative. I am not surprised when one of my wonderful clients associates a stain, crack or fading with a problem. However, if a piece falls off, even I know better than to righteously defend a failed detail.

I want to be clear, I do not advocate inferior construction. I do, however, see great value in finding a responsible way to accept, embrace, and even encourage the special gift of natural material transformation. Call it the patina of time or the efflorescence of history.

Let’s put the thesis into a different context unencumbered by the baggage of architecture. Andy Goldsworthy, a Scottish artist, has the extraordinary ability to express nature and time as one in the same. If there ever was a real life “Hobbit” its Andy! His art is dependent on TIME. The work is never complete… until it is gone… absorbed by Mother Earth, without taking more than it gave.

So what does this have to do with architecture? If you have to ask, you missed the main point of the sustainability movement.

It could be said my developing theory of TIME as a meaningful architectural component is a result of a long time interest in gentle architecture. However, I believe it is more about relinquishing the pencil to a much better designer. Nature has no pretense. She’s totally honest, efficient, decisive and will find the absolute line of least resistance. In her hands, architecture becomes science… physics, chemistry, mathematics and poetry spontaneously merging quantitative with qualitative! Nature has and always will be the touchstone of unflinching integrity.

The beginning two examples in my lecture, “Design in Ruin,” attempt to simplify this point. I compare two residential building exteriors similar in most respects except one is new, the other, privileged to be 75 years old. Both are beautifully designed and landscaped by esteemed Mexican architects. Compositionally, they share size, program and varying heights of orthogonal parapet walls finished in plaster. The only difference is a mere three-quarter century! I would expect most people would judge the new house more desirable than the old house. I have an amazing father, way smarter than me. Yet, I would rather be 62 than 92.

Therefore, age for age’s sake is not the issue. I have been to both houses. The newer home, designed by Ricardo Legorreta for Ricardo Montalban, Hollywood, CA, appeals to me on an intellectual level. That’s pretty much it.

The 75 year old house was the great Luis Barragan’s first home, La Casa Ortega, Tacubaya, Mexico City, 1940, before he built Casa Barragan, 1947, the house most architects associate with the name. Few know these two houses are located on the same street General Francisco Ramirez…side by side, not to be confused with the Barragan garden directly across the street.

It is easy to imagine the Ortega House and its integral gardens would have been unquestionably beautiful immediately upon completion. Then the garden matured and blurred the separation of the hand-built and the natural. Wind, rain and temperature commanded the materials to expand and contract. Wet/ dry cycles left their fungal mark. Today, the weathering process is mostly expressed by discolored plaster and crumbling corners. The patterns of stain tend to accentuate edges and intersection. Their spectral shading inhibited only by gravity concentrates on top then fades to nothing, typically in a downward direction. The architectural aging process is profound and incredibly beautiful. It is REAL.

Popular in the 1980’s post modern period was the simulation of weathering as long as one substituted the word “faux” for fake. Make NO mistake, I find that practice disgustingly insulting.

However, I don’t have patience to wait decades for nature to control my pencil. The lecture addresses several possible ways to acknowledge, respect and enjoy TIME without an immediate long term commitment. Here is one example.

Soon there will be special house in Paradise Valley built with rammed earth, concrete masonry and wood.

Yes, raw lumber as an exterior finish subjected to the extreme dry Sonoran heat. It doesn’t stand a chance!

Within a few Arizona summers the 2x’s and 1x’s will split, twist and blacken. Not to worry, the water proof membrane behind the cladding does not care nor depend on what it’s finish is doing.

I hope, as the years go by, the architecture will deepen in importance as the landscape tightens its handshake with the massive dirt walls and it’s out of control wood companion shaped by the forces of nature evoking the image of an abandoned desert outpost.

Of course if I’m wrong, I am tempted to say “it was out of my hands, blame Mother Nature”.

Have I got your attention?