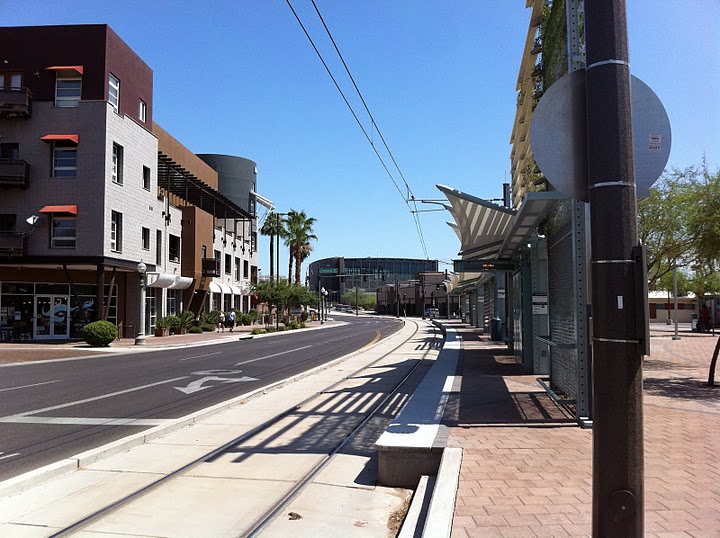 Getting to Know Phoenix’s Roosevelt Neighborhood

Last month I discussed the ideas behind meeting all your needs in a hyper-local environment, specifically with transit-oriented development areas in mind.  At the end, I challenged everyone to give it a whirl:

“See if you can get everything you need, and some things you don’t really need, without ever getting in your car. I bet you’ll like what you find, and your local business-owners will love the support. “

Feeling a need to put my money where my mouth is, what follows is a case-study in doing just that within the neighborhood of my METRO light rail stop at Central & Roosevelt.  To simplify things, I started from the light rail platform and timed myself as I walked in each direction, photographing or taking note of what I saw along the way.  This practical lab, of sorts, taught me a few things I’d never exactly put together.

First thing I learned: Turns out that my pace put me at exactly ¼ mile away from my starting point as the stop watch clicked 5 minutes.

Second thing I learned: Once I reached that ¼ mile mark, there was an iced latte waiting for me.  I know we often joke about Starbucks being everywhere, and laugh at the pictures of a Starbucks across the street from a Starbucks (or the two in the same parking lot at 7th Street & McDowell).  Today, however, is the first time I realized the same, perhaps unintentional, math with local coffee shops as well.  Heading East, West or South from the LR, I was able to keep cool sipping on iced lattes. 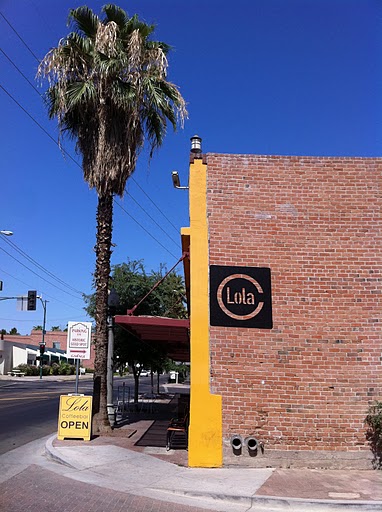 Last thing, I never realized it before but even within the tight geographic confines of a five minute radius, I felt like each direction I took turned out to be a rather separate neighborhood with it’s own identity.  To the west are tree-lined streets with red-brick paths and the remnants of stately homes in various degree of reuse. To the east are sets of strips malls with tenants that feel very not “strip-mallish” and fantastic murals everywhere. Heading south, every step feels like it’s bringing you closer to the skyscrapers and cultural symbols on the horizon. 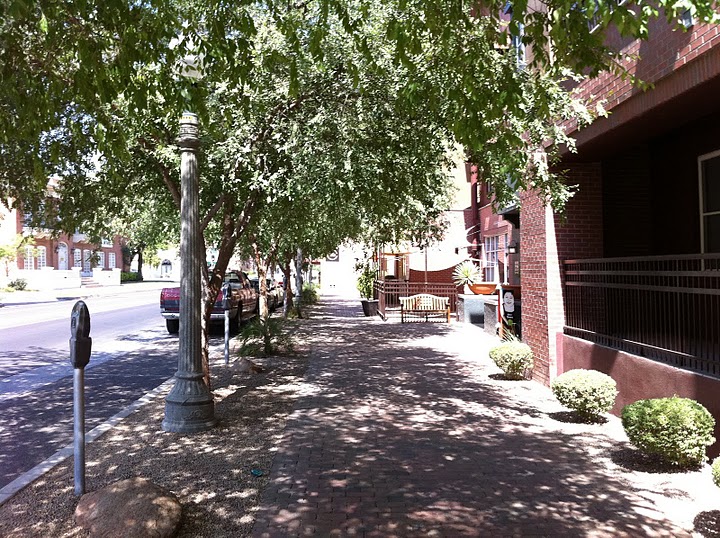 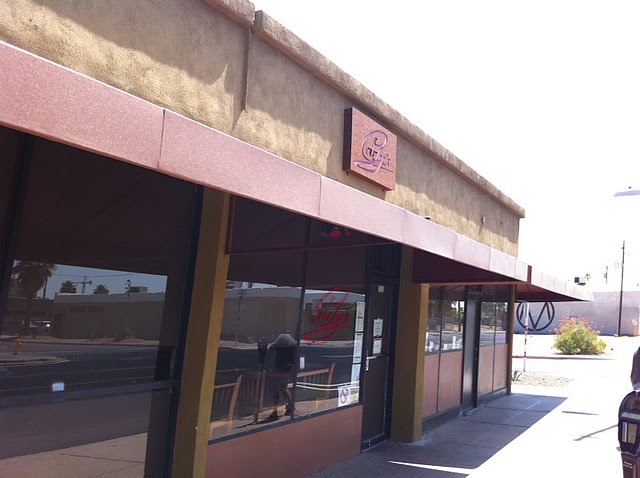 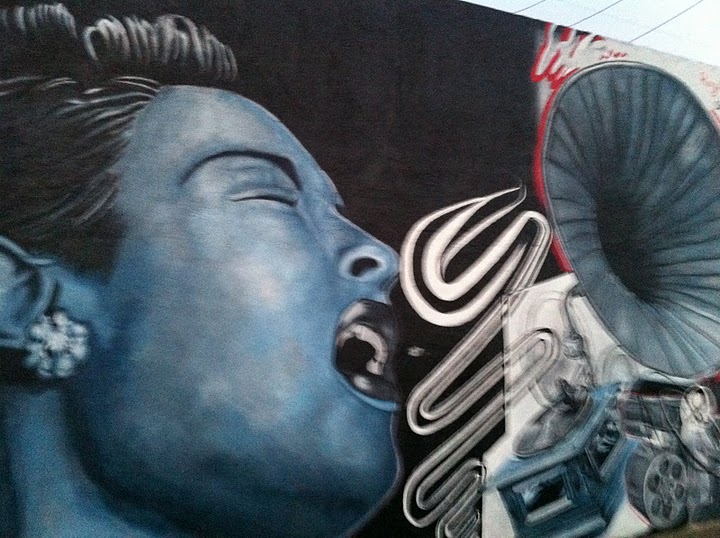 What’s Here:
Following the checklist of sorts laid out previously, I kept my eyes out for places that would meet my day-to-day needs.

Grocery Store/Market – Just 5 minutes south of the Light Rail is the Urban Grocery & Wine Bar/Phoenix Public Market.  While it doesn’t take the place of your typical supermarket, the variety and abundance of fresh produce and other market goods is a great thing.  Saturday mornings often find crowds of countless people milling about and piles of vegetables I would not be able to name without help. (Yes, my lack of vegetable knowledge is embarrassing but that’s why they label cans, right?)  Stopping by for a sandwich on a weekday afternoon, heading there for lunch on Food Truck Friday, or randomly running into a friend at the attached Royal Coffee, this building has certainly created a sense of community on what was just a vacant lot before. 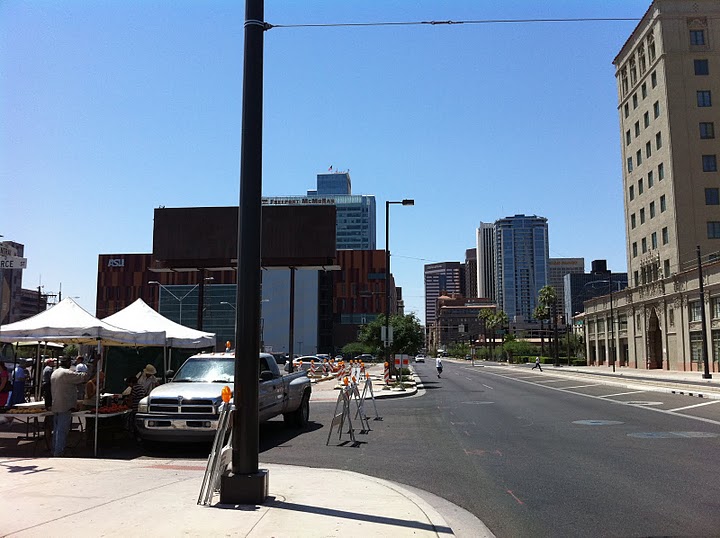 Community Space – Within the five-minute radius, I counted three churches and a handful of great bars & restaurants, but I’d be remiss if I thought for a moment that living in the Arts District wasn’t typified by the way the “community spaces” are determined by the creative crowd.  This was hammered home when I walked east of the rail station and ended my jaunt at Jobot Coffee on 5th street.  Everyone knows there is a great arts community on show case every First Friday, but the streets and alley ways were empty on Saturday morning until I stopped to get a latte and found the place was standing room only.  Everyone there was so engaged, mingling and sharing great ideas, not silently huddled over their lap tops. 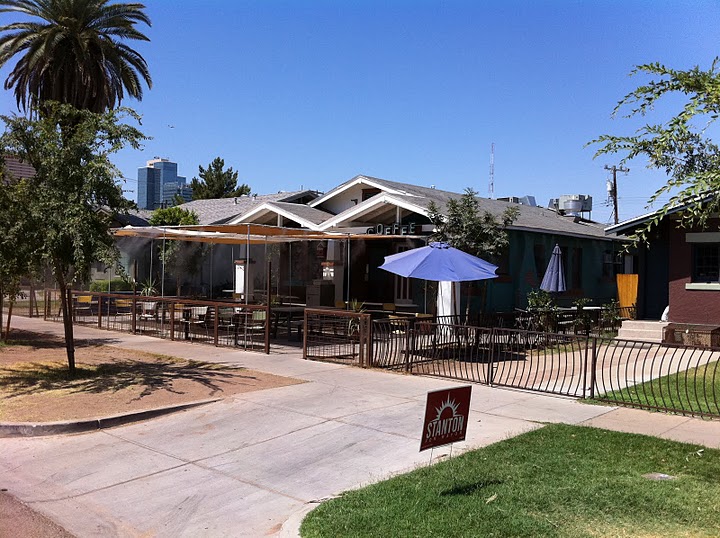 Entertainment – A bit of a mea culpa here; I’ve yet to make it to my neighborhood’s newest & greatest idea in entertainment: Filmbar.  I plan to go soon, but so far have just been heading south and going to the entertainment venues in Copper Square. Of course, while my ignorance can be documented, it certainly shouldn’t be held against my neighborhood.  I believe there’s also an improv theatre or playhouse of sometime nearby that I’ve yet to see.  Alternatively, there are some neat micro-sized music venues on Roosevelt where I’ve been pleasantly surprised by the random acts I’ve seen. I’m pretty sure I remember someone with a harp inside Lost Leaf one night. 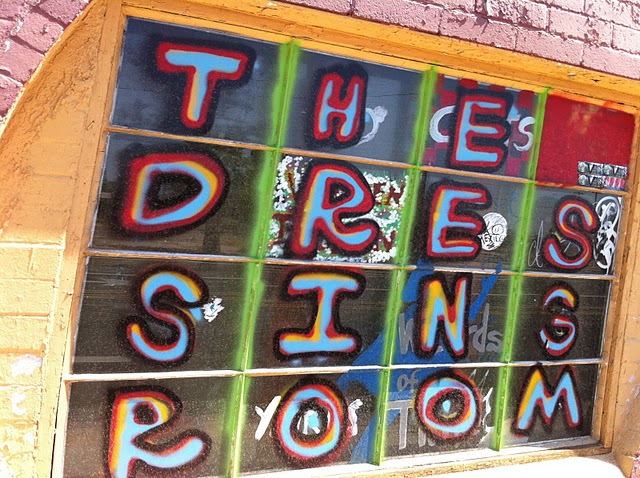 What Needs Improvement:
Open Spaces – With Deck Park basically touching the station platform, this should have been the first category I’d check off.  I know it must seem contradictory that I’m advocating for greater density while still searching for open spaces, but the value difference between open space with a purpose and merely having wasted margins around everything results in such a richer community experience.  However, while large and full of potential, the detached area that surrounds the park and apathetic attitude towards it’s use have kept me from going there too often.  I was glad to hear last winter that there is a committee for improvements to Deck Park, but until those are realized I’m sure I will continue to head one stop south and visit Civic Space park instead, especially since it feels more integrated and useful already. 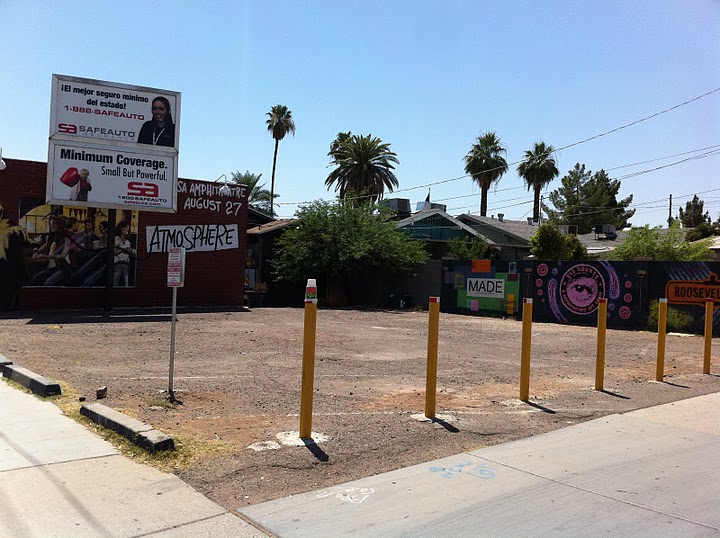 Shade – Yes, this is a typical Phoenix complaint, but given the diversity on display in the area, it becomes really evident which streets were planned/gentrified with pedestrians, or streetscapes, in mind, and which was catering to the motorist.  I suppose a more in-depth study would say that a lot of this has to do with which areas have been redone and which are examples of adaptive reuse with minimal impact on the environment, but from the casual observer there are clear gaps where you are not compelled to walk through and see what’s on the other side. 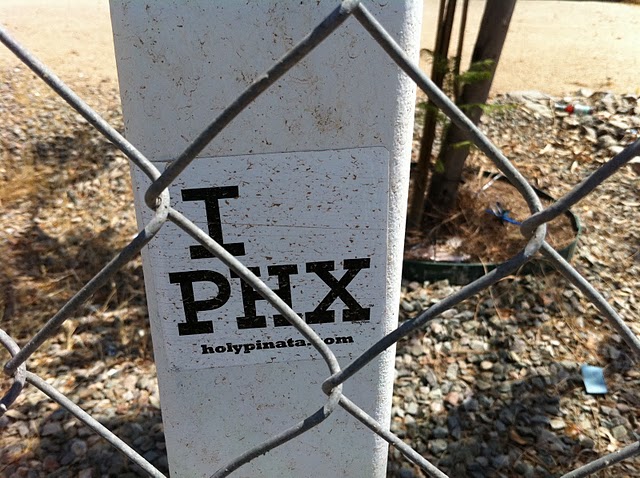 Shopping – Clearly economies of scale dictate that big-box retailers need to be placed in areas that have a higher residential density, and frankly I’m glad I can get to Target on the Light Rail and still don’t have to live next to one.  (thumbs-down to parking lots and delivery semis) What we do have, however, is an emerging corps of boutiques that are trying to spring up like dandelions through cracks in the sidewalk. I’m 100% certain that this trend means great things for the neighborhood and hope this is something we can really support an inspire more entrepreneurs to invest in the area. I know if there was a bookstore on my block I’d be there far too frequently.  I mean, I need something to be seen casually reading at the coffee shop; old copies of Amazing Spider-Man haven’t been making me look like too much of an intellectual lately. 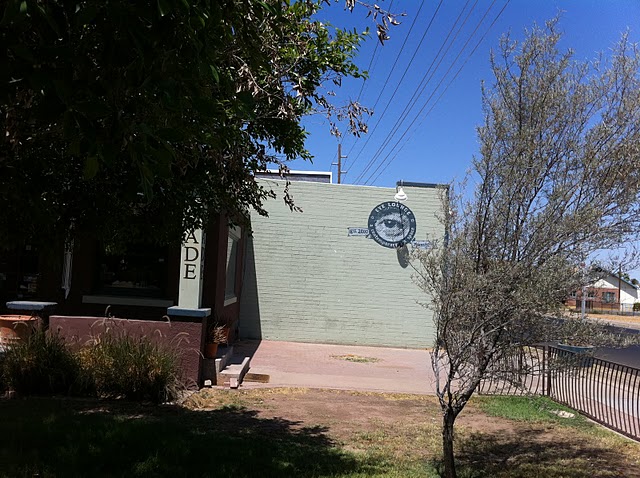 What’s Missing:
Health Care – I am not sure I expected health care to be the one kind of place most frequently missing, but it makes sense that of all services this is the most centralized.  Not long ago I was actually looking for a new GP myself, and ended up going to the office located at ASU Downtown.  I wouldn’t be surprised to find out that there’s a doctor’s office closer to me, but if there is, they aren’t doing a good job of making themselves known.

Density – Another area that can certainly be improved in our neighborhood is in-fill.  Before we can begin to talk about the benefits of verticality (namely shade), and how much easier we can meet our needs and provide opportunities for the future through increased density, the first step is to get rid of the parking lots, dirt lots and disused buildings that are forming veritable economic & cultural barriers around our neighborhood today.

While walkscore.com gives the area an extremely high score, I’m certain their algorithim hasn’t gone out there and noticed that there are some really disruptive gaps where greater density and ambient shade would incredibly improve the actual pedestrian experience.  The fact that most busy intersections have at least one vacant corner, and that a lot of buildings nearby have seemingly more parking spaces than interior space is a problem to solve/subvert as we look towards the future.

Add it Up:
So, for those of you scoring at home, here’s what I finished with:

In the end, it’s a neighborhood I love, and I am able to meet most typical needs, and the rest are accomplished within 1 or 2 rail stops. I think this is a great place and I’m excited to see how it improves over the next several years.

P.S.: Huge thanks to those of you who left comments on last month’s post.  Some truly insightful, intelligent discussion there.  High-five!